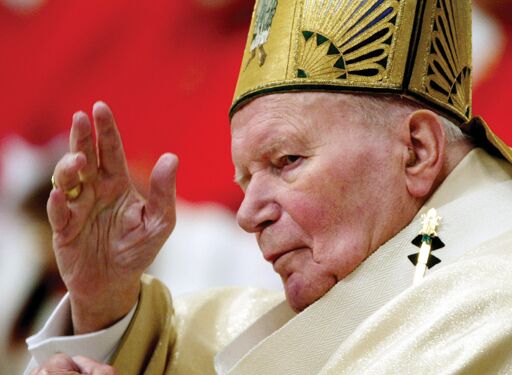 Pope John Paul II is dead. The question of who will replace him has far more significance than most people realize!

Now that Pope John Paul ii has died, it will only be a matter of days before the world meets his successor. The role this man will play on the world scene in the coming months and years simply cannot be understated.

The Trumpet has pointed out many times over recent years that the next pope will be an arch-conservative—and almost certainly the man to bring to fruition some of the most dreadful of end-time biblical prophecies. (See “The Next Pope,” from May 2000.)

Our June 2002 issue stated of the next pope: “Right wing he shall be, doctrinaire will be his mindset.” Relating how the present pope has increased the political power and diplomatic influence of the Vatican on the world scene—as witnessed by the Vatican’s hand in the fall of the Communist ussr and more recently the break-up of Yugoslavia—the Trumpet declared, “The next pope will enforce the spiritual power of the church!”

There is one powerful man within the Roman Catholic Church hierarchy who has the perfect credentials. He is one of the men vouching for the pope’s ability to make “essential decisions” (Washington Post, March 31). It just so happens that he appears to be one of the primary contenders for the job: the ultra-conservative German Cardinal Joseph Ratzinger.

The Trumpet has often referred to the powerful position Ratzinger has held for the past 24 years. As head of the Congregation for the Doctrine of the Faith, formerly the infamous Inquisition, he holds the most influential position in the Catholic Church under John Paul. The department he controls oversees moral and theological issues and is responsible for enforcing church doctrine—or fighting “heresy,” just like the old Inquisition.

Ratzinger has worked closely with John Paul for over 20 years to actively remove liberal elements from the church and to re-establish Vatican authority. “From the very beginning of his pontificate John Paul ii decided to systematically crush dissent by Catholic theologians and to marginalize critics so they would no longer stir up unwanted discussion within the church. With the appointment of Joseph Ratzinger as prefect of the Congregation for the Doctrine of the Faith in November 1981, it became clear that this was official policy” (Carl Bernstein and Marco Politi, His Holiness).

In support of this policy, many cardinals who demonstrated liberal tendencies on doctrine were removed. The leadership of the Catholic Church in Latin America, for example, was basically replaced with men who toed the Vatican party line. Similarly, Australian bishops “were carpeted in the 1990s for allowing a church culture that was seen as too egalitarian and open to secular influences” (Australian,February 28). A cardinal hand-chosen by Rome was sent down under “to pull Sydney into line.” The pope also appointed conservatives to run liberal churches in numerous other countries such as India, Austria, Argentina, the Netherlands, Canada and Brazil (ibid.).

The appointment of right-wing traditionalists was not only to ensure conformity to church doctrine and loyalty to Rome, but also to guarantee the election of a similarly minded pope after John Paul has passed from the scene. Of the 119 cardinals who currently have a vote on who his successor will be, John Paul has personally appointed all but three. By stacking the deck with like-minded cardinals, the pope has ensured that his successor will be a right-winger who shares his conservative theology and morality. The Australian reports that, at most, only 30 of the 119 might be considered liberals (ibid.); the number is probably much smaller than this. Regardless, with just a two-thirds majority needed to elect the new pope, he will be a conservative. Not only that, but John Paul instituted a fail-safe plan: He changed the rules so that if there is any disagreement on a candidate, the new pope can be elected by a simple majority.

Eberhard von Gemmingen, director of the German-language arm of Radio Vatican, believes that Ratzinger is one of the most promising candidates. “In the conclave [the electoral body of cardinals who will elect the next pope],” he said, “he could very well receive a majority of votes during the first round of voting” ( Der Spiegel,February 14). Ratzinger is popular and highly respected among cardinals from various parts of the world.

“To his detractors, Ratzinger is rigid and doctrinaire: to his admirers his firm hand guides the church along true conservative lines” (United Press International, February 25). Ratzinger’s candidacy for the papacy “is said to have wide support in the church” (ibid.).

In recent years he has toned down his hard-line image by being more reserved in public and has even at times issued liberal statements to soften his persona. “There was a stigma,” said one Vatican insider of Ratzinger. “He rises above that now” (Time, January 10).

Some church officials have thought that Ratzinger, 78 this April, is too old to be “pope material.” This however, could actually be one of his biggest advantages, according to Deutsche Welle(February 10). With the uncharacteristically long reign of the current pope, some in the church believe a “transitional pope” would be a good thing. Thus Ratzinger has the potential of pleasing both the conservatives, by virtue of his uncompromising commitment to hard and fast Catholic dogma, and those who oppose him, by the consolation that he could not remain as long in the post as his predecessor. It seems Ratzinger himself is using this fact to his advantage, saying if he were to become pontiff, he would be prepared “to give up the job after a few years” (ibid.).

In February, the bbc reported that the “destiny of Europe is preoccupying the Vatican.” Cardinals have complained of an “anti-Catholic inquisition” from a liberal element within the EU (February 11). With a mood like this, high-ranking Catholic clergy may see Ratzinger as just the man to solve the “problem.” Referring to the decline of Catholic practice in Western Europe, the March 5 Spectator pointed out that Ratzinger—who has been “forthright and fearless in confronting secularism and defending the orthodox teaching” of the Catholic Church—“sees clearly what is at stake.” As a Vatican official told Time, “The Ratzinger solution is definitely on” (op. cit.).

Certainly, the coming pope will be one for whom the “destiny of Europe” will be of prime concern. Seven resurrections of the war-mongering Holy Roman Empire are prophesied to occur in chapters 13 and 17 of Revelation. Six of these resurrections have already occurred. (Read about these in our booklet Germany and the Holy Roman Empire, which is free upon request.) The reason the identity of the next pope is of particular interest is that this man is likely to be one of the two most powerful leaders of the seventh resurrection of the Holy Roman Empire—an empire that will thrust the world into World War iii! As editor in chief Gerald Flurry has stated, “Over the past 1,500 years there have been six resurrections of the ‘Holy’ Roman Empire. Most of the time this empire revolved around Germany and the Vatican, along with Italy” (June 2000). The seventh resurrection, which is now in the making, will once again revolve around Germany and the Vatican. And a German pope may be just the man to bring the two together. Watch Joseph Ratzinger.