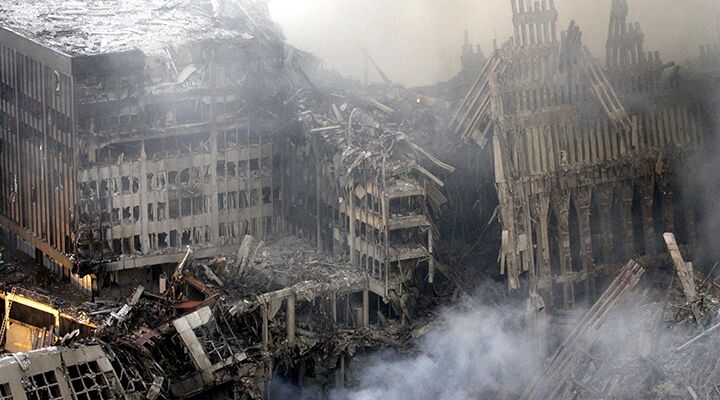 Ten years on, there’s been no letup in the pace of prophetic events.

Just four months after Gerald Flurry announced in early 2001 that human civilization had entered into the “last hour,” the world watched in shock, on live television, as 19 Muslim zealots hijacked commercial jets and blasted a gaping hole through the Pentagon in Washington, d.c., and pulverized the World Trade Center in lower Manhattan.

Bible prophecy lurched into the fast lane on that September day—and it’s been barreling ahead ever since.

As my father later pointed out in his booklet The Last Hour, God allowed 9/11 to signal to America and the rest of the world that we are very near to the prophesied return of Jesus Christ and the establishment of God’s government on this Earth! Things will never return to the way they were before 2001, he explained.

Now look at where we are today. On Wednesday, I noticed a story on FoxNews.com about how U.S. commanders were pushing for more leeway to retaliate against Iranian incursions in Iraq and elsewhere. In recent months, according to the report, Iran has been working behind the scenes to expand its influence all across the Middle East and has stepped up its weapons smuggling to terrorist proxies fighting against U.S. troops.

So U.S. commanders were basically asking if we could fight back.

Later that day—the same day U.S. military officers were pleading with Washington to authorize covert operations against Tehran—Fox News also reported that America was preparing to draw down its forces in Iraq to a measly 3,000 troops by the end of this year—“marking a major downgrade in force strength” (emphasis added throughout).

In other words, we’re clearing out the house and loading up the vans, even as Iran moves in the heavy artillery.

This isn’t exactly the way we drew it up 10 years ago, when President Bush identified Iran as one of three nations in the “axis of evil” and told Congress that the war against terrorism wouldn’t end “until every terrorist group of global reach has been found, stopped and defeated.”

Back then, we at least had the desire to eliminate the threat of terrorism, but not the necessary will to face the problem head on and fight to the finish. This is why we wrote, within weeks of the 9/11 catastrophe, that the number one state sponsor of terrorism would survive America’s retaliatory wrath and emerge from the war “stronger than ever.”

Today, the Iranian head of the snake is fully intact and unquestionably stronger than ever. It is now poised and ready to grab the spoils of America’s war in Iraq—something we’ve been predicting for more than 15 years.

Earlier this week, one of the television stations that airs the Key of David rejected a program we had scheduled for this weekend—“Egypt and Libya to Join Iran’s Terrorist Network.” (You can view the program here.) The station manager didn’t like that my father said America has actually helped Iran to expand its terrorist operations.

Evidently, Daniel 11:43 and Leviticus 26:19 are too “political” for a religious show—or maybe the subject is just too controversial for the tenth anniversary of 9/11.

Whatever the reason, it’s not based in reality. God said He would break the pride of our power, which is why America wouldn’t go after the head of the snake in 2001. It’s why, even after storming through Iraq in 2003, with all guns blazing, that we are now handing it over to the mullahs in Tehran.

“Iran has been the single biggest beneficiary of the 2003 U.S. invasion of Iraq. Iran has seen a rapid rise in the magnitude of its regional influence—and has every intention of keeping it,” Stratfor wrote yesterday.

The United States has handed Iraq to Iran on a silver platter. Afghanistan will be served up next. And in the last few months, America has chased away Mubarak and Qadhafi—two authoritarian dictators who at least had the courage to resist against the spread of radical Islam.

This brings to mind another phrase from Leviticus 26—in verse 20: “And your strength shall be spent in vain ….”

It’s interesting that God inspired the word “spent” here. Of course, He’s speaking primarily of the intense effort that has yielded little or no results in return. But we’ve also spent a lot of money over the last decade—and there’s not a lot to show for it.

America’s national debt was sitting at $5.7 trillion on 9/11. Today, it’s about to blow past $15 trillion. We’ve managed to increase our debt burden at an unfathomable rate of nearly $1 trillion per year since 9/11!

In the November 2001 Trumpet magazine, Tim Thompson warned about the economic aftershocks of 9/11 and how they might sink the entire global economy. He wrote,

This magazine has been warning the world that a globe-impacting financial shock to the American economy was coming—we just didn’t know exactly how or when.

Ten years on, the how and when of this prophesied global meltdown is coming into a much sharper focus.

Ron Fraser also wrote an important article in the November 2001 Trumpet. He said the U.S. and Britain were entering into an “unwinnable” war that would sap the brotherhood nations of their energy, morale and money. He wrote,

A protracted, debilitating war that will gnaw at the vitals of declining Anglo-American influence in this world, leaving them most vulnerable to the whim of the emerging three great power blocs that will seize the opportunity to divide control of the global system among themselves.

The three great power blocs he spoke of are radical Islam, a united Europe and the East Asian bloc. For Europe, in particular, Mr. Fraser wrote, America’s hour of trial would become Germany’s window of opportunity.

Today, as Mr. Fraser wrote earlier this week, quoting a recent headline, “All the Focus Remains on Europe.” As the euro crisis continues to shake the very foundations of the oversize group of nations in the European Union, prophetic events race forward as fast as ever!

“The euro crisis will give Germany the empire it’s always dreamed of,” the Telegraph wrote earlier this summer. And how about this Daily Mail headline from three weeks ago: “Rise of the Fourth Reich, how Germany is using the financial crisis to conquer Europe.”

This week, Spiegel Online reported that German Chancellor Angela Merkel is now considering a two-track Europe—something she has repeatedly rejected to this point. Trumpet readers know that this is a significant step in the direction of whittling Europe down to its prophesied ten nations or kings.

Add to that a comment made by former German Chancellor Gerhard Schröder during an interview on Sunday—in order to avoid future economic crises, he called for the creation of a “United States of Europe.” That sounds exactly like something Herbert W. Armstrong wrote about during the 1960s.

What a decade this has been since the beginning of the last hour in 2001. Ten years ago, on 9/11, radical Islam lashed out at the world’s lone superpower and this world hasn’t been the same since. As my father wrote in The Last Hour, it dramatically signaled the prophesied collapse of the United States, along with her brothers in Britain and Judah.

“Do you think so great a fall could not come to so great powers as Britain and America?” Mr. Armstrong asked in The United States and Britain in Prophecy well over a half century ago. “You need to open your eyes to the fact that Britain’s sun already has set!” And, “The United States is fast riding to the greatest fall that ever befell any nation!”

The handwriting is on the wall! Mr. Armstrong cried.

Mark Steyn picked up on this “handwriting on the wall” theme in his latest book, After America. He compares America to Belshazzar’s Babylon, saying we’re not facing decline—we’re already in it. “What comes next is the ‘fall’—fast, sudden, off the cliff, if only because the Obama spending binge made what was vague and distant explicit and immediate.”

In other words, the pace of prophetic events will only accelerate further from here on out. As Joel Hilliker wrote on Wednesday, we need to be thinking about how fast these latter-day prophecies will be fulfilled.

We are, after all, living in the last hour before Christ’s return!