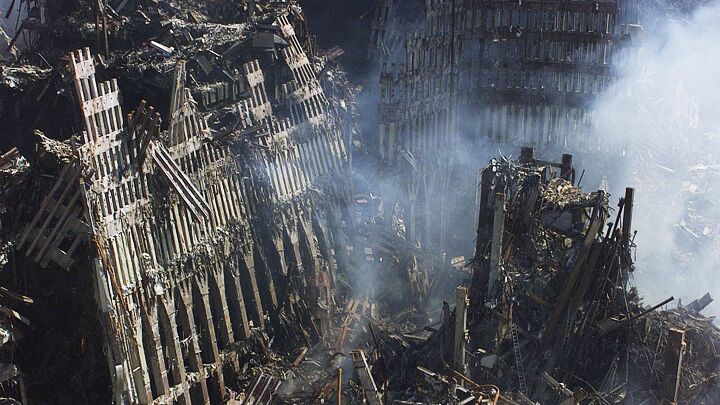 This past May, I gave a message to our Church members that we are living in the “last hour” of this present age. (We documented this fact in the last issue of the Trumpet). About four months later, the United States suffered the worst terrorist attack ever. Is this a sign of the times? Will things in this world ever be the same again? Where are we now in prophecy?

The “last hour” prophecy was recorded by the Apostle John: “Little children, it is the last time: and as ye have heard that antichrist shall come, even now are there many antichrists; whereby we know that it is the last time” (i John 2:18). Time is translated from the Greek hora, which literally means hour (it reads this way in the Revised Standard Version). This is the only place this expression is used in the New Testament. We are living in what God terms the “last hour” of this evil world!

John thought it was the last hour before Christ’s Second Coming, then, in his time. He was, as we know today, nearly 2,000 years off. He was off in his timing, but every explicit detail of this prophecy is now being fulfilled. Jesus Christ, the one giving this revelation, allowed John to write it under this impression so it was recorded prophecy for our day.

When Herbert W. Armstrong came on the scene, he proclaimed that we were living in the end time. Now we’re right down to the last hour. John is talking about the last hour of the last day. I believe that this last hour specifically began when God recently revealed to His people what is in i, ii and iii John.

In a sermon in May, I said we should expect this last hour to be different than any other hour in the history of man! Just four months later, the face of the world changed dramatically. The terrorist attack of September 11 changed so much. Many people have mentioned how the world will never be the same again—how it’s almost as if we are in a new world. The world HAS entered its last hour! It is plain for all to see!

This is one of the darkest times in the history of the land of America. It is the last hour. There is nothing in history to measure it by. It’s going to be that bad.

However, at the end of the last hour will come the greatest news this world has ever heard.

The terrorist attacks of September 11 were quite unsettling to me. Yet, I know what God says is coming, and it will be many times worse than those attacks. It’s been said that the devastation at the World Trade Center (wtc) looked like a nuclear winter. We are about to see a real nuclear winter that we cannot even imagine—if our people don’t repent.

Satan is about to inflict a “great tribulation” (Matt. 24:21) on the nations of modern Israel (which include the United States and Britain). But there is a preliminary stage that will bring these countries down. A dreadful, horrendous time is coming upon this Earth, even before the Great Tribulation.

“And as he sat upon the mount of Olives, the disciples came unto him privately, saying, Tell us, when shall these things be? and what shall be the sign of thy coming, and of the end of the world? And Jesus answered and said unto them, Take heed that no man deceive you. For many shall come in my name, saying, I am Christ; and shall deceive many. And ye shall hear of wars and rumours of wars: see that ye be not troubled: for all these things must come to pass, but the end is not yet. For nation shall rise against nation, and kingdom against kingdom: and there shall be famines, and pestilences, and earthquakes, in divers places. All these are the beginning of sorrows. … And this gospel of the kingdom shall be preached in all the world for a witness unto all nations; and then shall the end come” (Matt. 24:3-8, 14).

After the gospel has been preached, an “end” comes—the end of the Philadelphia era of God’s true Church (see Rev. 3:7-13). After Mr. Armstrong, the leader of that era, died in 1986, antichrists came on the scene (termed the “synagogue of Satan” in Rev. 3:9).

Continue the flow in Matthew 24 to see the next event that will begin to take shape on the world scene. “When ye therefore shall see the abomination of desolation, spoken of by Daniel the prophet, stand in the holy place, (whoso readeth, let him understand)” (Matt. 24:15). When Mr. Armstrong died, Germany and the Vatican really began to gain power. (For more information, write for our booklet Germany and the Holy Roman Empire.) Now they are leading Europe.

“For then shall be great tribulation, such as was not since the beginning of the world to this time, no, nor ever shall be. And except those days should be shortened, there should no flesh be saved [alive]: but for the elect’s sake those days shall be shortened” (vv. 21-22). God will shorten those days so that there will be some flesh saved alive. Anybody who sees this mad world, with all of these enormously destructive weapons, can see where humanity is headed.

God really knows how to get people’s attention. The Twin Towers were the tallest buildings in New York; the Pentagon is the largest office building in the world. These were citadels of the greatest financial and military power in the world. They symbolized America’s greatness. But their destruction is just the beginning of sorrows.

The wtc attacks were a little taste of the Great Tribulation. What we saw is just a tiny little problem compared to what is coming. Multiply what happened on September 11 by maybe 30 or 40 thousand to begin to get a picture of what it will be like in the future, with all the blaring sirens and the bleeding nation. The unparalleled violence will continue until we repent! The horror will not end until we learn that lesson.

“It is a fearful thing to fall into the hands of the living God” (Heb. 10:31). In the future, it will get so bad that they won’t even be able to take care of all the dead. God is going to get our attention.

God is telling us that we are in the last hour. The present world is almost over. But understand—the devil also knows it is the last hour! That means he has only one hour left to wreak havoc on the world, and that fills him with violent rage! “… Woe to the inhabiters of the earth and of the sea! for the devil is come down unto you, having great wrath, because he knoweth that he hath but a short time” (Rev. 12:12). He is the real power behind those instigating the terror, as they fulfill their bloodlust. Mankind has never seen anything like this.

The fire in the wtc was so hot that it caused the steel to lose all of its strength. It melted faster than ice cream in hot weather. It was so hot, people were jumping from 100 stories high. But as bad as that was, it was just the beginning of sorrows. The future will be much worse. That’s what it will take to wake up America so that God can bless them.

After the Last Hour … Good News

But realize also the positive side of this—there is a voice out there warning our people. The Philadelphia Church of God is the only voice telling the world what is going to happen. Though it comes with a lot of bad news—so much so that the land will eventually not be able to bear our words (Amos 7:10)—it also comes with the greatest news mankind has ever heard.

Notice Revelation 1:7: “Behold, he cometh with clouds; and every eye shall see him, and they also which pierced him: and all kindreds of the earth shall wail because of him. …”

Behold He comes! This is overwhelmingly good news. Thayer’s Lexicon and Strong’s Concordance state that “behold” can be translated, and in this context should be translated, “Behold! See! Lo! He comes!” Pay attention! He is really coming!

And it is in present tense: He comes! So who is God really talking to, if this is in the present tense? He’s addressing the people that are there when it’s all going to happen, the people who will have the honor and privilege to see Christ return to this Earth! Christ is coming. That is the only hope of man.

The terrorist attack is truly ugly news. But it is tied to this mind-staggering event!

“And now, little children, abide in him; that, when he shall appear, we may have confidence, and not be ashamed before him at his coming” (i John 2:28). We are in the last hour. At the end of this hour, Jesus Christ will return to the Earth! We are so close to this awesome event!

From The November 2001 Philadelphia Trumpet
View Issue FREE Subscription
Next