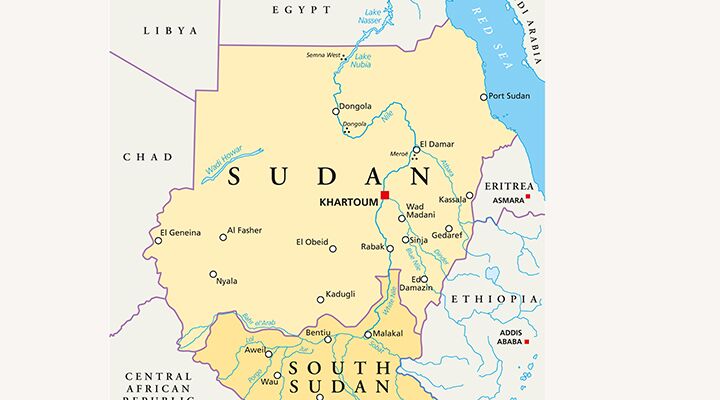 South Sudan’s independence is being celebrated in some intriguing circles.

From the September 2011 Trumpet Print Edition

Described as “one of the least-developed regions on Earth,” South Sudan, on July 9, officially became the 54th African state and the world’s 196th nation-state.

The division of Sudan into two separate nations is welcomed by the elites within Germany and the Vatican. It plays right into the hands of European imperialists for at least three vital reasons: oil, strategic location, and religion.

Regarding the first reason, both Chinese and EU interests have vied for some time for the reliable flow of oil to their respective economies. Though China has borne the brunt of developing the infrastructure to transport the oil in South Sudan to Port Sudan in the north for shipment abroad, Germany’s proximity to Sudan gives it the edge in influencing government policy as the new nation develops. It also allows for the rapid deployment of EU “peace keeping” battle groups to the region, something the German defense establishment, together with other EU defense elites, is speedily working to develop.

Concerning the second reason, consider the strategic importance of Sudan and its Red Sea peripheral neighbors to the EU imperial project. The Bundeswehr is presently deployed in North Sudan and in Ethiopia, and the Deutsche Marine in the coastal waters off the Horn of Africa as well as in the Mediterranean. These deployments plus those of the Bundeswehr in Afghanistan and Uzbekistan represent Germany’s strategic effort to surround Iran in preparation for a stronger presence in the region when Iran takes over Iraq, pending America’s withdrawal from that country. Germany and China simply cannot permit any prospect of Iran shutting down access to the transit of oil through the Persian Gulf.

The German and Chinese economies have become so mutually dependent on each other that each must work to protect the other’s interests in the vital Middle East oil triangle. One can clearly see the rising strength of German-Chinese political connections, and the situation suggests that Germany’s military presence in the region will not only continue, but even grow in the future. The trade-off for Germany securing this region will be Beijing granting it access to the international ports that China controls. This temporary cooperation between these two countries will prove to be devastating to the Anglo-Saxon nations: The Bible prophesies of their being economically besieged by the resurrected German-dominated Holy Roman Empire during its period of greatest strength and aggression (Revelation 17:12-13).

The third reason for the EU’s interest in South Sudan is the prospect it offers for religious influence over the masses by the Vatican. There are 2 million Catholics in Sudan, where the church has nine dioceses, seven of which are in the South. The Vatican is well entrenched to influence the future policies of the South Sudanese government to favor EU interests.

Rome’s interest in South Sudan was highlighted by its sending a high-powered delegation to South Sudan’s independence celebrations. Its press office sent “best wishes for peace and prosperity” to “the authorities of the new state, and all its citizens, many of whom are Catholic.”

The Vatican press release noted that Rome has enjoyed “stable diplomatic relations with the authorities of Khartoum [capital of Sudan, which is Islamic] since 1972.” It is interesting to note that even while it had such relations, the Sudanese government oversaw the death of nearly 2 million people and displacement of some 4 million in southern Sudan as a result of raids by northern Islamists. The Vatican certainly did not permit this slaughter to interrupt its strategic “stable diplomatic relations” with Khartoum. That is because Vatican diplomacy is specifically geared to enhance its long-term goal: yet another resurrection of the Holy Roman Empire, including colonization of strategic parts of Africa.

The Vatican and Germany share a common interest in the whole Horn of Africa, situated alongside one of the most strategic commercial gateways in the world, especially for Europe. It is located at the mouth of the Red Sea, which leads to the Suez Canal. It is almost within spitting distance of the Persian Gulf and the richest oil fields in the world. It is home to both French and U.S. military bases.

Both the Vatican and Germany recognize the danger of the Horn being lost to elements extremely hostile to Western interests. The violence in Sudan between Islamists and those in the south is one example of warfare between competing religions. In predominantly Christian Ethiopia, religious tension is also growing: Rioting Muslims, despite being a minority, have been burning churches and Christian homes and other buildings. The government is cracking down on the Islamists, but as happened in Egypt, and more recently in Syria, the crackdown may end up empowering those being targeted. In Somalia, pirates have been targeting commercial shipping operations of Western nations, kidnapping and demanding ransom, even hijacking oil supertankers.

Now, the whole region is being ravaged by devastating drought and famine. What effect might that have? In Tunisia, a food crisis exploded into mass protests and toppled the regime. In times of dramatic upheaval, people often look to the vocal radicals for solutions. Extremists will be empowered. Certainly, the potential is there for Islamic fundamentalists to make huge gains in both Ethiopia and Somalia. The Western-backed transitional government in Somalia is already only clinging to power through foreign military intervention. Somalia is a hotbed of activity for al Qaeda and like-minded groups. Without food and jobs, more young people will see piracy as a way out. Will those same young men also see war, or the local warlord, as a viable alternative?

No wonder EU imperialist elites are so concerned about the Horn of Africa. It could be set to become a lot more hostile to European interests. And because of its strategic location, it could be dangerously hostile.

The International Federation for Human Rights reported that barely two months before South Sudan’s declaration of independence, “border disputes escalated into armed clashes in Abyei [a disputed border region] when the northern troops took possession of the region, displacing more than 110,000 people fleeing the fighting.” Such incidents indicate that peace between north and south in Sudan will only come under the oversight of a “peace keeping” force supplied by a third party. Germany and attendant EU battle groups will stand ready to fill that gap.

Watch for Germany and the Vatican, with diplomatic support from China, to work to shape events in Sudan in the months ahead. As we have witnessed in the Ivory Coast, South Sudan may well effectively become a vassal African state to the imperialist European Union, none other than the seventh and final resurrection of the Holy Roman Empire!