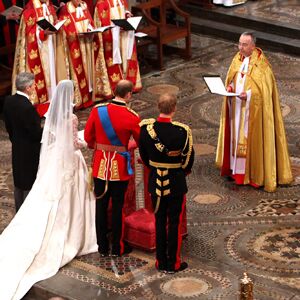 What is it about a British royal wedding that so fascinates the world?

From Sydney to Stockholm, Seoul to Santiago they watched, glued to television screens for a seeming magic, even fairy-tale moment—the marriage of a real royal prince to his bride.

What is it that so fascinates the world about the British royal family? Why did Friday’s royal wedding in Westminster Abbey, in the city of London, capital of a small island nation, hold such fascination for the rest of the world?

Friday’s royal occasion, carried off with an aplomb that only the British can perform so well, so impeccably, held much of the world spellbound for a moment. It seems there’s something in the human makeup that instinctively longs for ceremony, pageantry, and displays of regal splendor. But just what is it about Britain that holds the attention of the world on such an occasion as the wedding of Catherine Middleton to Prince William of Britain?

In combing the newswires for some indication of any sensible attempt to explain this phenomenon, I came across Charles Moore’s musings in the Friday edition of the Telegraph. It’s one of the best attempts at coming to grips with this strange reality and is worthy of our consideration.

Moore observes that “There are other royal weddings—in Spain, or Sweden, or Swaziland—and I am sure they are very nice. But they do not stand for anything much in the eyes of the world. They don’t attract messages of support from the crew in the International Space Station—a particularly surreal touch in yesterday’s reports. They don’t echo in the imagination of humanity. Our one does” (April 29).

The question is, out of the 196 nations that blanket this world, why does such an occasion in one of its smaller island land masses, largely isolated from the great continents, appear so unique?

As Moore further—and very correctly—muses, “[N]othing else anywhere has the archetypal quality of what was shown in Westminster Abbey, the same closeness between what is unspeakably grand and what is ordinarily human.”

Yes, the royal wedding seemed special for some reason to the rest of the world. But to the British, in particular, it was even more special. As Charles Moore observed, Friday “was a day of rage, in Syria. The bishop did not overstate it when he said that, in Britain, it was ‘a joyful day.’”

Why that momentary national joy? Surely there was much more to it than a temporary escape by the people from their recessionary woes, from the ever present menace of being overtaken culturally by the mass of foreign humanity within their island shores, from the terrible loss of national prestige exemplified by the reduction of the once mighty British Navy to a mere splinter of its former power and from the descent of British morals into the cesspool of depravity.

What is it that truly explains the spectacle of what really was for Britain an especially “joyful day”?

In a précis of the unique values on display in London, and especially Westminster, last Friday, Moore summarizes them as “a sense of decorum and ceremony. Contained in this is a strong idea that how something is said in words or presented visually has delicate shades of meaning which must be respected and brought out. [T]he exact words used were written down 450 years ago, and … the basic form of the vows, like some of the building, is roughly a thousand years old. [T]hese were made in the name of a Supreme Being in whose honor the whole building was constructed. [T]he clothes, particularly of the men, denoted hierarchy, function and history all at once. [T]he whole thing was about love, and yet … the interests of the state were deeply engaged.”

This all, Moore notes, was “interesting and beautiful and alive,” expressions of “a high civilization.”

These are quite articulate, very appropriate and interesting musings from a human perspective. Yet to truly understand the global fascination with British royalty and the ancient ceremony that surrounds such occasions as the wedding of Prince William to his new bride, one has to resort to a higher source than the human mind. In fact, one has to reach into the mind of that Supreme Being mentioned by Charles Moore. For it is there that we find the true source of the ancient ceremony and pageantry surrounding this royal wedding.

That Supreme Being gifted to mankind a book, commonly known as the Holy Bible. That book was taken by the British people into every land they inherited as part of the greatest empire in humankind’s history. The British and Foreign Bible Society oversaw the translation, publication and distribution of that book into every principal tongue known to man. Within the pages of that book, the true source of British royal ceremony is revealed. It all tracks back to a unique building, a tabernacle, the design of which was inspired by the Creator of man, documented by the patriarch Moses, and preserved for posterity in the biblical book of Exodus.

The colors of British royalty are sourced in that tabernacle, as are the colors of its national flag, the Union Jack. The sense of ceremony that later became associated with Davidic royalty is rooted in the same source, finding its most glorious architecture in Solomon’s temple. That same concept of ceremony has evolved into the current-day expression of British royal occasions. Any genuine study of history proves this fact. Our book The United States and Britain in Prophecy is a good place to start such a study.

Though God gifted this process of royal ceremony to the nations of Israel, He gave a special responsibility to the nations of Judah and Ephraim to carry on and to spread the influence of those traditions. The documented lineage of Queen Elizabeth ii proves that the House of Windsor holds to those general traditions to this day. It was in fact vestiges of Davidic ceremony and pageantry that was on display in London and especially Westminster, last Friday.

The world has a hunger for such, though the masses remain ignorant of the source of that hunger and the reason for it. Simply put, this world needs a Savior, a right royal Savior! It hungers and thirsts for such amid all its wars, woes, the destructive force of wind, rain, fire, earthquake, tsunami and nuclear nightmare. It especially yearns for such when its peoples become subject to the tyranny of so many false “saviors” as they have too often throughout history!

It was that longing that was on display, globally, during Friday’s royal wedding. That is why the world was drawn to the television screens, watching enamored of the ancient pageantry and ceremony playing out in the venerable city of London.

Humankind has a gnawing hunger for someone to tell them who they are, why we are here on planet Earth, where we are going, just what is the true reason for human life and the ultimate destiny of humankind.

Occasions such as Friday’s royal wedding give a sense of continuity to the observer. It all appears so timeless. Charles Moore comments on the 1,000-year-old basic form of the vows that Prince William and his bride made before God. In reality they are much more ancient in their source. It’s this sense of continuity and timelessness attached to the ancient institution of the British monarchy that is perhaps most poignantly demonstrated on British royal occasions.

To the liberal, the socialist, the republicanist and the atheist in our midst, the British royal family is an anachronism that ought to be committed to the dustbin of history. The enchantment of a global audience of multiple billions watching in fascination the joyfully regal display of last Friday’s royal wedding puts the lie to that.

The great overarching reality is, simply put, that mankind subconsciously yearns to be guided and governed by an authority that would produce all the blessings, the peace and happiness of which the masses are largely deprived. The occasional British royal wedding gives, humanly, a glimpse of the best of that of which the English-speaking peoples were once seen capable of fulfilling. A glimpse of, as Sir Winston Churchill put it, the prior capabilities of “the last best hope for mankind.”

Sadly, the prospects of fulfilling that “last best hope” faded with the demise of the British Empire, to be only briefly and spasmodically revived under a mere handful of U.S. presidents during America’s postwar rise to power.

Yet, far and above all that, the Supreme Being does have a definite plan for all who ever have or who will be yet born of woman. It’s a royal plan of a level far and above that which any human being can imagine. It involves the preparation of all humankind to inherit, in common, a royal inheritance of unimaginable proportions. It is the very inheritance that a supreme, universal governing Father has gifted to His Son, the Savior of mankind, to share with all who will willingly subject themselves to His rule.

What the world witnessed during last Friday’s royal wedding was but a glimpse, in physical type, of its own future royal heritage. You need to understand and see graphically portrayed in your mind’s eye this great timeless truth. Read and study The Key of David and The Incredible Human Potential. They contain a vision of your future that will give you tremendous hope amid a world of great confusion and strife, for they reveal a vision of royalty that is timeless, one which your Creator just yearns to share with you—forever!