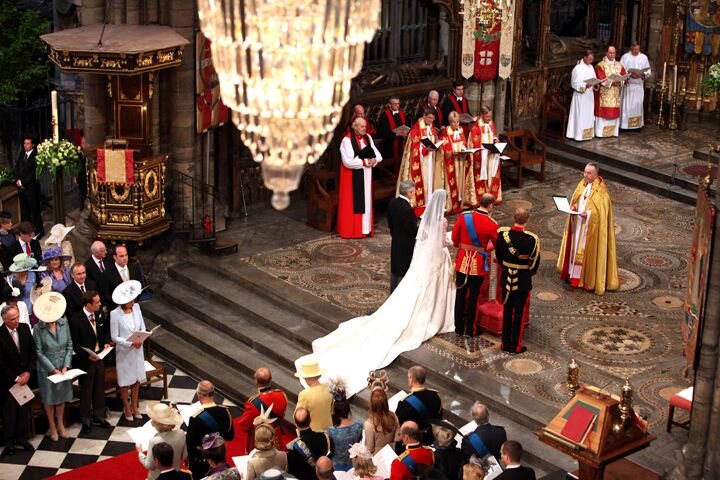 This wedding was the first in many generations in which Westminster Abbey lacked one important witness.

Britain’s royal wedding, watched by billions, is significant not so much for the royal pomp surrounding it, but for one key missing element. This was the first time that a famous block of sandstone, once resident under King Edward’s chair in Westminster Abbey, was missing from that place in the continuum of a line of royal weddings since King Edward took the stone forcefully from the Scots in a.d. 1296.

Queen Elizabeth, in concert with the British Parliament, permitted the stone of Scone, lia fail, to be returned to Scotland in 1996 after 700 years of residence in the ancient abbey.

Thinking on the significance of Prince William, second in line to the British throne, marrying Kate Middleton amid all the pomp and pageantry that is always so well orchestrated by the British on such occasions, I reminisced on a special moment in my life which will remain unforgettable. It’s a story of this very publication and its special respect for this ancient royal artifact. It all took place in Westminster Abbey in early 1994, just two years before the stone was moved to its present resting place at Edinburgh Castle.

Back then I was living in the UK working for our foreign-language department organizing the translation of the Trumpet and our other publications into the major European languages. I remember sitting in a London cab opposite our editor in chief and technical director of the Key of David program as they anticipated taking a first glimpse at that which was once generally known and identified as Jacob’s pillar stone.

It was late afternoon, with the sun beginning to set over a beautiful and historic London city. The sights, sounds and atmosphere that day come quickly flooding back now with Friday’s royal wedding. Over the Tower Bridge and the River Thames we drove, past Big Ben, the House of Lords and Parliament, and suddenly our well-educated British cabbie declared, “Alright chaps, here we are. This is Westminster Abbey.”

Upon our arrival, the abbey security guards and local police ushered the remaining tourists out of this most famous of church cemeteries. Special permission had been arranged with the abbey to permit the three of us as representatives of this publication and our weekly tv program to visit, photograph and videotape this special silent resident of the abbey, an ancient piece of Middle Eastern sandstone.

Greeted at the entrance by a singular abbey priest assigned as our liaison, we entered the famed edifice in silent awe of its long history. So quiet and peaceful it was as we strode slowly through Westminster, the priest noting various historic burial sites of the great patriots and loyalists of the realm, many of whom had died in battle, defense of and/or tenacious support of the throne and all that it represented.

Nearing the rear of the abbey, we arrived at our location in a small unassuming cul-de-sac. Black iron bars surrounded King Edward’s chair, with the royal resident ensconced below the coronation seat. Before departing, the priest directed our attention to the small, gold-framed identification on the back of the chair, which stated “Coronation Chair and the Stone of Scone.” He reminded us that this used to state that this was “Jacob’s Pillar Stone” but had in the recent past been altered. In hushed tones, he turned to Trumpet editor in chief Gerald Flurry and said, “I believe, as you do, that this is indeed Jacob’s pillar stone.” In Hebrew, the word for pillar is matstsebah, which means “a memorial stone.”

As Mr. Flurry relates in his booklet The Key of David, “Westminster Abbey in London, England, holds the bones of the men and women who have ruled from the British throne. The abbey is a memorial to the British belief that a good king or queen can only be made through understanding the history of the throne. History comes alive when you walk through Westminster. No other nation on Earth holds such a monument! No other nation has such a precious view of history.”

For the next four hours, our editor in chief sat but a short arm’s length from this famed stone of destiny penning a script that would later become a booklet and a series published and broadcast worldwide. Meanwhile, our tv technical director and I were busy setting up cameras, tripods and lights as we recorded images of this most prominent of mute abbey residents.

You may think it rather strange that three men would be so passionately excited about a rock. Yet, it was the eternal vision embodied in that stone, embracing as it does our Creator’s plan for all mankind, which came alive that night. The video and photographs of the stone of destiny that are often seen in our items online, in print and on television came from that special night in London.

Now, 17 years later, those memories are reignited as Britain sends a signal today to God and the world by conducting a royal wedding in Westminster Abbey with what was once one of the abbey’s oldest and most famous relics now in exile in Edinburgh, Scotland.

This mute former resident of Westminster Abbey was not in attendance at the site of the royal wedding at Westminster today. A vital link identifying the dynasty of the House of Windsor as part of a continuous lineage stretching back to the King David of biblical times, a lineage that has its roots in ancient Israel all the way back to the patriarch Jacob, was missing. Perhaps the fact of that missing stone says much about the extent to which today’s generation of royals are losing touch with a heritage that was once known and believed by the venerable Queen Victoria, and many of her advisers and military leaders, in the time of British imperial greatness.

The history of the stone of destiny—before its time in Westminster, Scotland, Ireland and Jerusalem, all the way back to the moment Jacob awoke from his dream having used it for his pillows—is recorded in chapter 28 of the book of Genesis. There it is written that Jacob, upon seeing the assembly of stones he’d set up for his pillows at night had by morning become a large singular stone, named the stone Bethel, or “House of God” (Genesis 28:10-19; 35:10-15).

Britain and much of the English-speaking world hoped that today’s wedding would bring more dignity and stability to the monarchy. But it’s not William or Kate that can, by their actions or personalities, bring stability to the monarchy and contribute greatly to a more peaceful, happy and prosperous Britain and Commonwealth of Nations. That is the task of the majestic Creator of the stone. That stone remains today a memorial of our Creator, Sustainer and Provider, the eternally royal King of kings—a perpetual guarantee of His promise that He will have a resurrected King David rule once more over Britain’s royal house, in a far better world to come, all under His supreme rule!

In his book The United States and Britain in Prophecy, Herbert Armstrong’s declaration of future world events, events that are leaping into today’s headlines, resounds in a powerful warning of what will happen to the Anglo-Saxon nations, the British peoples, if we reject this stone of witness. But it also rings with a vision of real hope that is centered around the very throne from which today’s Queen Elizabeth rules! As Mr. Armstrong wrote, “When Christ returns to Earth to sit on that throne, He shall take over a live, existing throne, not a nonexistent one (Luke 1:32).”

It is prophesied that soon the true Stone of destiny, Jesus Christ Himself—the supremely royal Stone “cut out without hands” (Daniel 2:45)—will return to marry His affianced bride, the true Church of God! At that time, lia fail, the stone of Scone, will emerge out of exile in Scotland to be present as silent witness to the royal wedding of all royal weddings. It will be conducted not in Westminster Abbey, nor elsewhere in London, but in Jerusalem, the very site of King David’s ancient palace—and you can be sure the stone of destiny will be there, in both type and in ultimate reality!