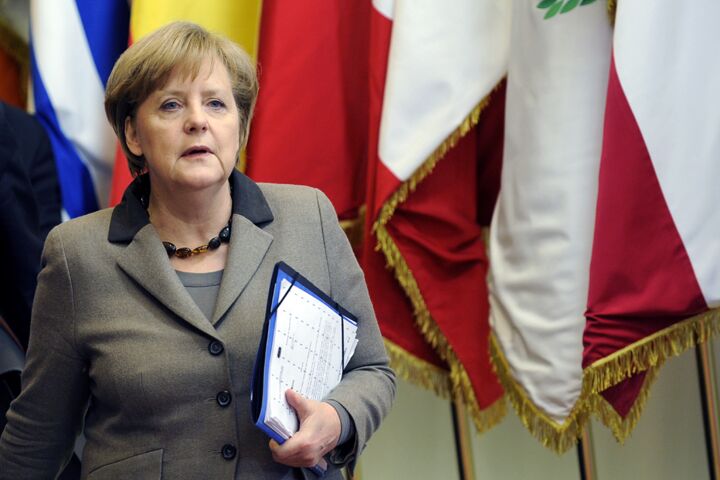 German Chancellor Merkel’s proposal to save the euro was renamed and watered down, but it still established a new economic government modeled after German principles.

Eurozone nations were forced to surrender more of their sovereignty as their leaders met at Brussels to negotiate German Chancellor Angela Merkel and French President Nicolas Sarkozy’s proposed “pact for competitiveness” plan to save the euro from further crisis.

The nations agreed to expand the temporary euro rescue fund for countries facing economic crisis and also agreed to the foundation of the permanent Euro Stability Mechanism, which in 2013 will replace the European Financial Stability Fund in bailing out eurozone nations. Despite much of the tough language being moderated, instead of forcing constitutional “debt brakes” on eurozone countries, the new euro pact says they are an example of what can be done. The leaders agreed to closely harmonize their budgetary, tax and social policies to prevent further euro crises.

The details on how to do so aren’t agreed on yet and the pact leaves no way to be enforced as it does not contain provisions to impose sanctions on violators. In addition, the “pact for the euro” only declared a general appeal for wage restraints, an increase in retirement ages and closer cooperation, rather than an order.

So why was Merkel announcing a success?

The negotiations were going to be tough—especially as the pact would affect member nations’ key point of sovereignty, that of determining their own fiscal policies—so many were expecting Merkel’s plan to flop.

However, as Der Spiegel wrote, in the end “the agreement was more than many had expected.”

As Merkel herself said, the euro pact is “the opening of a new door.” While her proposal wasn’t passed in its original form, the euro pact laid the important groundwork in the agreement to the principles behind her very German proposal.

Remarkably, the eurozone heads of government have agreed to meet once a year to verify progress toward their common goals. At first it will only include the eurozone members, but all other European Union countries are invited to join.

This means every year, European leaders will be subjected to criticism or praise from Germany on how well they are acting German.

This is the EU’s self-proclaimed economic government!

This economic government is the new doorway to a more centralized European Union. And it’s all been set by German leadership with German principles. The nameplate on the door should read, “This way to German-Led Europe!”

“Just as euroskeptics always feared, monetary union has led to a state of affairs where—in order to ‘save the euro’ as Mrs. Merkel puts it—Europe’s ancient states find themselves having to accept a quantum leap towards political union and a degree of subjugation that would not have been tolerated otherwise,” he writes.

There may not be specific details in place yet, but as European Central Bank President, Jean-Claude Trichet said, the pact “goes in the right direction.”

Also, the fact that it is watered down will give Germany another chance to enforce greater demands on the rest of the eurozone, as the pact won’t completely solve the euro crisis.

“This measure is, like all our extraordinary measures, temporary,” Trichet said.

So when these temporary measures are overwhelmed by future problems, perhaps when more European countries need bailout money, Germany will once again have the motivation and the opportunity to enforce more of its standards, and from a much stronger position at the bargaining table!

The “pact for the euro” must be approved at the EU summit of all 27 nations, which will meet on March 24-25. Even this vaguely worded document will face some obstacles in being passed, namely Irish opposition.

Ireland, as a recipient of EU bailout money, is in a tough position. The pact’s goal of harmonizing the eurozone’s tax policy will put Ireland’s low corporate tax rate at risk. Its lower corporate tax rate, however, is about the only thing attracting corporations to do business there. So raising the rates to the higher levels used in Europe will remove one of the few competitive advantages Ireland has, making it harder for its economy to recover and for it to pay back its loans.

Ireland also used the eurozone summit to negotiate a reduction on the interest for the bailout money the EU loaned it. The rate was purposefully set higher than typical as a punitive measure to dissuade others from requesting a bailout.

It was Ireland’s request for a reduction in the rate that caused the negotiations to last for so long, resulting in a heated discussion between Ireland’s newly elected prime minister, Enda Kenny, and Sarkozy, who was reported by the EUobserver to have said: “So we’re supposed to give up millions and you’re not even willing to talk about taxes?”

Past recipients of bailout money and future recipients will have little choice but to approve the plan. Merkel has warned that for the rescue fund to be created in 2013, the pact must be adopted. In other words, to get the German bailout money, agree to the German pact.

Ireland didn’t get the reduction it wanted, though negotiations will continue until the March summit.

Greece, another recipient of bailout money, was forced to agree to sell €50 billion in state assets over the next four years. By selling its stake in the nation’s postal, railway and gas companies, as well as its stake in Athens airport, Thessaloniki water, ATEbank and the Pireaus port authority, Greece could raise €15 billion. It still has to find €35 billion somewhere.

When the International Monetary Fund (imf) suggested the same cut last month, Greece’s prime minister told it not to “meddle in the internal matters of the country.” When the dictates come from Europe, he is silent.

In return for this, Europe will cut the interest it is charging on Greece’s bonds by 1 percent, and raise the amount of time it has to pay back the loan from 4½ to 7½ years.

The truth is Ireland and Greece were the first economically conquered territories of the EU empire.

As Kevin Myers wrote in the Spectator, “The incoming Irish government will be merely administering the country as a satrapy of Brussels and the European Bank” (February 26).

It didn’t matter who got elected in Ireland’s recent election—either way, the decisions made in Brussels had more bearing on the country than who would be its next prime minister. Merkel and Sarkozy’s early rejection of Kenny’s demands is proof of that.

As for the EU member nations not in economic trouble, they will most likely approve the pact in two weeks’ time, as the pact doesn’t apply to non-eurozone countries unless they sign up. This means the pact should be approved by the full EU summit.

Germany will have a new open door to continue to transform the EU into a superpower of its own design. The Trumpet has forecast this very trend for over 20 years, boldly proclaiming, based on Bible prophecy, that a German-led Europe will directly challenge and replace the U.S. as world superpower.

With EU countries well on the path to coordinating their economic policies and creating an economic government to strengthen the euro, the financial groundwork for this soon-coming superpower is being laid. Some economists, such as American Barry Eichengreen, who is predicting the end of the dollar as the international reserve currency, see the trend as well.

In an interview with Der Spiegel,Eichengreen said that once Europe surmounts its major challenges, “the euro could be ready in five years” to rival the dollar.

The pact was “an important message on the political pledge of the euro members to fight for the euro’s stability,” Chancellor Merkel announced after the agreement was made. “I hope that this will also be a good message to the world in terms of the euro as a major currency.”

Yes, Merkel truly scored a victory, not just for Germany, but for the EU as well. Sure, the pact is vaguely worded, but that is to give the leaders whose nations will be party to it the best chance of selling it to their people. Most media outlets have focused on the concessions Germany gave, rather than the real story of Germany’s victory.

Germany and the Euro-federalists engineered this crisis. They created an economic system that drove nations to ruin. Now they are offering to save these nations, but only if they give up more power to Europe. The EU is now closer to overcoming its economic challenges and that much closer to becoming the world’s next superpower.

Perhaps the only one who may not win is Merkel herself. Barely recovering from the resignation of her most popular minister, Karl-Theodor zu Guttenberg, her coalition is facing tough elections in Germany this month which may have just gotten harder, as lawmakers and the electorate are opposed to putting more German money at stake.

The pact, however, was a necessary measure by Merkel and Sarkozy “to prevent their own banks from collapsing,” Eichengreen said. Caught in a tough position herself, Merkel may have cost her coalition important elections by saving the German banks and the euro. If this is the case, it could allow for a big change in German politics, as the Trumpet has said could happen soon (see Ron Fraser’s article “Germany Calls for Guttenberg’s Return”).

For more information on the significance of Germany’s victory in its plan to save the euro, see Trumpet editor in chief Gerald Flurry’s article “A Monumental Moment in European History!”