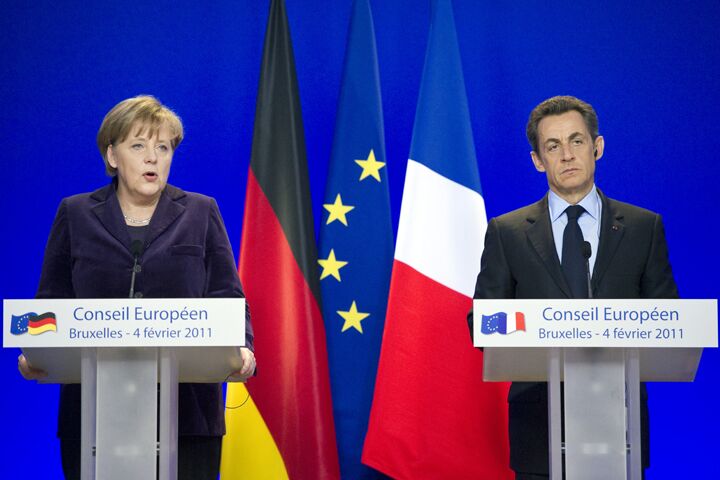 German Chancellor Angela Merkel and French President Nicolas Sarkozy have presented a new plan to save the euro. Their solution? For everyone to be more German.

Can the eurozone be saved? Only if Europe acts more German!

German Chancellor Angela Merkel and French President Nicolas Sarkozy presented a new plan to save the eurozone to a summit of EU leaders in Brussels on February 4. The plan, called the “pact for competitiveness,” calls for a six-point program to be implemented that would have the 17 members of the eurozone coordinate their economic and social policies to save the common currency. It even allows non-eurozone countries to sign up if they wish.

Among the points in the plan is adapting retirement ages to a country’s average life expectancy, abolishing automatic wage increases linked to inflation, and bringing corporate tax levels into greater harmony.

One of the most blatantly German ideas in the plan is for nations to adopt a “debt brake.” Germany amended its constitution with a debt brake that requires its government to eliminate its structural deficit by 2016.

Merkel and Sarkozy intend to convince other eurozone nations of their plan in a specially convened summit of eurozone leaders in March before the EU summit that is to be held later that month.

The summit will be worth watching to see if Merkel will make 2011 “the year of new confidence for the euro,” as she said at a news conference last Friday.

While long-time readers of the Trumpet would be expecting such moves from Germany, this does mark a new stage in Europe’s transformation to a German-led superstate.

Merkel’s support for the plan amounts to a remarkable U-turn in her policies. She has long denied wanting to bring Germany into closer cooperation with other European countries, especially ones as economically toxic as Greece.

Additionally, the kind of plan Merkel is supporting is not popular with the Germans. “When Germans today hear the word ‘Europe,’ many imagine a loss of control,” wrote Petra Pinzler in an article in the German weekly Die Zeit. “And fewer and fewer really believe that the euro will one day be as safe and solid as the German mark once was.”

Merkel also feared closer cooperation among the 17 eurozone members would “lead to a union within the Union” and that “countries that are not members of the euro club, such as Poland, could be sidelined,” according to an article by Der Spiegel staff (January 31).

The article said the “often hesitant” chancellor was “uncharacteristically” highly determined to save the euro, which she said was “the embodiment of Europe today.”

It is a brilliant move by Germany to mold Europe into its own image!

A year ago, the Greek crisis rocked the eurozone and began to shatter confidence in the euro. Action taken by Germany and other euro members to bail out Greece with billions of euros of loans staved off the crisis but didn’t solve the problem. Germany and other northern eurozone members wanted member nations that are in over their heads with debt to install strict austerity measures. The member nations with debt problems wanted guarantees of more money.

The member nations are still bickering over how to solve the problem. Now Merkel isn’t just merely reacting as she did with the Greek crisis, she is taking charge and setting the terms of the debate!

The terms of the plan boil down to one major principle: If you want more money, become more German!

A door for Merkel to force German policies on the rest of Europe is wide open, and she is taking advantage, even with the support of other heavyweights such as France.

“Until recently, Merkel’s suggestion would have a caused a storm of protest in Madrid, Athens and Paris,” writes Berliner Zeitung, “but after a year of the euro crisis, anything seems possible” (emphasis mine throughout).

The brazen attempt by Germany to impose its will should raise alarm bells all over Europe, but Europe is at a stage where it is now possible for Germany to be this clear and forthright about telling other member nations what to do!

Why are the other members of the eurozone even considering such a blatant attack on their sovereignty?

“The answer is simple: Merkel wants to exploit the current situation,” writes Süddeutsche Zeitung, translated by Der Spiegel. “At the moment, Germany, as a prosperous country, has a chance to set the rules. Everyone knows that the monetary union would be finished without Germany.”

And so now Merkel is trying to do just that! She feels the time has come for Germany to dictate the rules more openly.

“Nevertheless, the chancellor is playing a dangerous game. She wants all or nothing,” continued the Süddeutsche Zeitung. “According to Merkel’s plan, other European countries must adopt the German culture of stability. … If they refuse, Merkel will refuse to provide German guarantees for bailout packages.”

It is truly a dangerous game! As Bible prophecy indicates, this game that will force German culture down the throats of other European nations will eventually lead to World War iii.

Merkel wants all or nothing. Will Germany get its way?

Many Europeans are skeptical. Upon arriving at the one-day summit, Belgian Prime Minister Yves Leterme denounced the plan, as reported by EUobserver. “Each member state has its own accents, its own traditions,” Mr. Leterme said. “We will not allow our social model to be undone” (February 4).

Even German magazines proclaimed that Europe doesn’t need to be more German.

Moreover, France and Germany don’t totally agree on the broad outline of the six-point plan.

Yet the crisis in the eurozone proves that the state of the common currency cannot remain the way it is. Rumors of the end of the euro are still circulating.

In order for the crisis to permanently end, Germany has to act. “That was the lesson that the chancellor’s office learned: To end the euro crisis for good, we have to think big,” wrote Pinzler.

Other eurozone countries see this too, according to Pinzler:

For the other governments have also learned their lessons from last year. The German culture of stability is finding new converts everywhere in Europe. In Paris, because it has been recognized there that France is going to have to take on liabilities for countries in crisis. In Madrid, because they greatly fear the country will be bankrupt. In Dublin, because everyone there sees how they are going to have to pay for the mistakes of the Brian Cowen government. And in Brussels, because the place has long since been taken over by the German thinking, more than we want to admit.

The lesson is clear: The euro cannot survive unless Europe converts to German ways.

Even now Spain is desperately staving off the need for a European bailout. Prime Minister Jose Zapatero is undertaking austerity measures, moves Merkel has praised. If Spain defaults it would be a nightmare for the eurozone and bankrupt its bailout fund.

“Everything will stand and fall with Spain,” says Christoph Rieger, an analyst with Commerzbank, Germany’s second-largest private bank, in an interview with Der Spiegel.

Merkel even paid a special visit to Zapatero last Thursday, where they talked about how Germany dealt with its own economic crisis in the early 2000s, according to Der Speigel.

No wonder Madrid, in desperate need of German euros, is a supporter of Merkel’s plan! No nation in debt trouble will be able to resist Germany’s basic plan. It would be economic suicide to do so.

The other remarkable aspect of Merkel’s plan is her strategy to implement it. She wants Germany and heads of other member nations to direct the process of adopting the plan, not the European Commission, which traditionally would do so.

EU Commission President Jose Barroso told Merkel in a meeting in late January that the European Commission wanted to direct the process and would not be sidelined.

Merkel did give Barroso some assurances that the Commission would oversee its progress, but Germany is in the driver’s seat.

As mentioned before, the plan is to be submitted at a special meeting of eurozone government leaders followed by an EU summit where the 27 heads of state and government will discuss the issue. This leaves Germany, and to a degree France, in the role of directing the process.

When it comes to economic policy, Germany has the reigns, and not even the EU leadership is able to prevent Germany from trying to force its own policies on the rest of Europe.

Germany is essentially attempting to establish an economic government in Europe. The common currency will finally have its common economic policy and it will be made in the likeness of Germany!

As Pinzler wrote, “So far we haven’t heard this part of the story very often: Europe will be German.”

The truth is, the conclusion of this story has been told very often by the Trumpet! For over 20 years, we have proclaimed that Europe will be German. The skeptics are right to a certain degree. There are many obstacles in Germany’s path to institute such policies. Some member nations, even those not in the eurozone, will oppose them.

But Bible prophecy indicates 10 will sign up—and that will be enough for Germany to transform the European Union into its very own superstate!

For more information, request our free booklet Germany and the Holy Roman Empire.