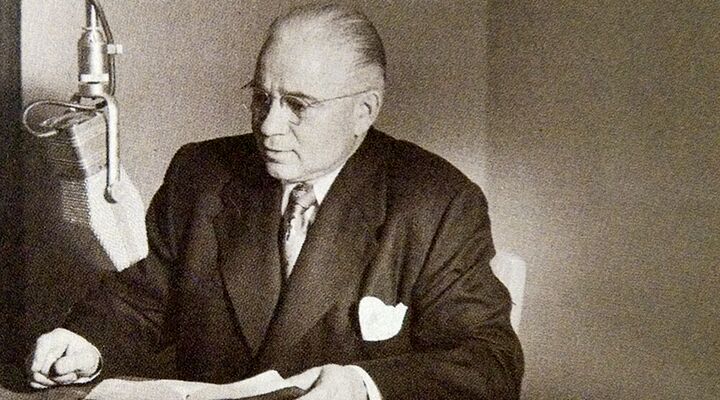 “We don’t understand German thoroughness,” said the founder of the Trumpet’s predecessor, the Plain Truth, Herbert W. Armstrong in May 1945. “From the very start of World War ii, they have considered the possibility of losing this second round, as they did the first—and they have carefully, methodically planned, in such eventuality, the third round—World War iii! Hitler has lost. This round of war, in Europe, is over. And the Nazis have now gone underground …. They plan to come back and to win on the third try.”

Mr. Armstrong said this while Germany was surrendering. He predicted Nazism would not be rooted out, and that many Nazis would have important roles in the new Germany that rose from the ashes of the old.

History has already proven Mr. Armstrong right. In 1956, he wrote, “The day that war ended, the Nazi organization went underground! Their plans for coming back have been proceeding, under cover, since 1945! Already Nazis are in many key positions—in German industry—in German education—in the new German Army!”

But the full extent of Nazi subterfuge has not been revealed until today. A slew of new studies and declassified reports show how thoroughly Nazis infiltrated the new German government.

After the war ended, the German Foreign Ministry maintained its innocence. We didn’t help the Nazis, it protested. We didn’t like them. We simply did our jobs and nothing more.

It was a lie. In October last year, a commission of historians published an 880-page book detailing the Foreign Ministry’s cooperation with Nazism.

“The Foreign Ministry wasn’t just somehow involved in national socialism or even a hotbed of resistance, as was long claimed,” Prof. Eckart Conze, who chaired the study, told Spiegel. “From day one, it functioned as an institution of the Nazi regime and backed its politics of violence at all times. After 1945, there was a high degree of staffing continuity within the ministry, and some of its diplomats were seriously tainted.”

“The ministry contributed, as an institution, to the violent crimes of the Nazis, even including the murder of the Jews,” he continued. “In this sense, one can say that the Foreign Ministry was a criminal organization.”

Not only were these diplomats allowed to remain in office, but the German government worked to protect them from prosecution. The Foreign Ministry then went on to aid fellow Nazis; its legal team helped Germans avoid prosecution for war crimes overseas.

Prof. Hans-Peter Ullmann, who chaired the Finance Ministry study, said that at one point 30 percent of the German government was financed by stolen Jewish assets. The New York Times commented, “Plundering Jewish assets could not have been possible without an efficient civil service” (Dec. 26, 2010).

The German Intelligence Service, which became the bnd in 1956, also hired Nazis. Last March, it admitted that it hired 200 Nazi criminals for 15 years after World War ii.

“Some had been involved in massacres in Poland and Russia, others were Gestapo torturers; all found a berth in the West German intelligence service,” wrote the London Times (March 10, 2010).

The German secret service wasn’t the only force recruiting Nazis. The United States also protected Nazi war criminals so they would spy for it. A report published by the U.S. National Archives on December 10 shows that America lost interest in hunting down Nazis after 1946 and states that it “went to some lengths to protect certain persons from justice.” A separate Justice Department history of the era says America created a “safe haven” for Nazis.

It is no wonder, then, that both the U.S. and German intelligence agencies covered up Nazi war criminals.

“With this information one could definitely have found Eichmann in 1952, and it would be an insult to any secret service to claim that the information wasn’t sufficient,” said historian Bettina Stangneth.

The Independent reported, “German intelligence is known to be reluctant to surrender all its Eichmann documents because of fears that full disclosure would prove beyond doubt that German and Vatican officials colluded in helping him to avoid trial for war crimes and escape to Argentina” (January 10).

Another example is the “Butcher of Lyons,” Klaus Barbie. Barbie cooperated with the Americans, so they helped him flee to South America. A French court sentenced him to death for his crimes in World War ii, in absentia.

Then, in 1960, the German foreign intelligence agency recruited him as an agent in Bolivia. Spiegel reported that it did this knowing his true identity.

America ignored Herbert Armstrong’s warnings. Too focused on Russia to worry about a resurgent Germany, it did nothing, and in many cases worse than nothing, when it came to hunting down Nazi war criminals.

The same civil and diplomatic service that supported Hitler was allowed to keep functioning. The German government absorbed old Nazis.

Now that same government is at the head of Europe. That should be a major warning to the whole world.