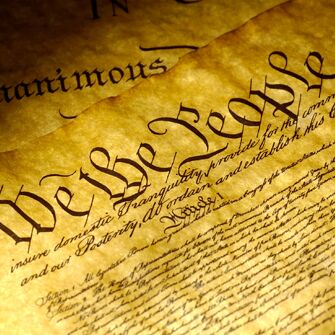 There is a lot of discussion today about the U.S. Constitution—for it and against it. However, all of the critics and supporters of the Constitution miss the foundational point.

The Constitution cannot be used to solve our problems unless we have the spirit of those who founded it. That spirit came mainly from the Bible. Our history and the Constitution itself prove that point.

They said that only religion and private morality based on the Bible would make the Constitution work. James Madison said, “We have staked the whole future of America’s civilization … upon the capacity of each and all of us to govern ourselves according to the Ten Commandments of God.”

The Greek Empire tried to establish the rule of law. The Greeks failed and their empire collapsed. The Roman Empire also tried to build a society based on law. The Romans were unable to do so and that empire fell. Many other empires experienced the same failure.

The famous British historian Paul Johnson wrote an article titled “No Law Without Order, No Freedom Without Law.” It was directed to the Jewish, American and British peoples in particular, and printed in the Sunday Telegraph, Dec. 26, 1999. In it he wrote this about America: “[B]oth in Virginia and in New England to the north, the colonists were determined, God-fearing men, often in search of a religious toleration denied them at home, who brought their families and were anxious to farm and establish permanent settlements. They put political and religious freedom before riches …. Thus took shape the economic dynamo that eventually became the United States—an experiment designed to establish the rule of God on Earth …” (emphasis mine throughout).

What a goal! They planned to establish the rule of God on Earth! That means they had the goal of each person keeping the Ten Commandments of God—the basis of all righteous law.

Christian leaders today teach that the law has been done away. That is almost the extreme opposite of what our forefathers believed! Our spiritual leaders, both from the right and the left, have led us into lawlessness and grave danger.

Even the politicians who established our republic were more spiritual than most of our religious leaders today!

Here is what Jesus Christ said in Matthew 5:17-18: “Think not that I am come to destroy the law, or the prophets: I am not come to destroy, but to fulfil. For verily I say unto you, Till heaven and earth pass, one jot or one tittle shall in no wise pass from the law, till all be fulfilled.” Christ came to fulfill the law, or fill the law to the full. He essentially was saying that every t must be crossed and every i dotted. Still, many thought, and still think, that He came to destroy the law. They believe that not because they can prove it, but because they want to believe it! They are apparently unaware of where such thinking is leading us.

Christians are supposedly people who follow Christ, the Lawgiver. That is how they got their name “Christian.”

But whether secular or religious, we are racing into lawlessness, and our nation is plunging toward catastrophe. Any good history book will show us that!

The Bible should be even more convicting. Study it and see the deadly danger of lawlessness.

That probably means that we wouldn’t even have a Bill of Rights if it weren’t for our forefathers’ faith in the Bible.

Now let’s take it one step further. We would probably never have had a Constitution that has been the envy of the world, if not for our strong, Bible-believing Founding Fathers!

The Constitution contains numerous biblical principles and doctrines from the Bible. That doesn’t mean it is on the same level as the Bible. But neither is it on the human level, as many people are prone to believe.

It was much harder for our Founding Fathers to spill streams of blood winning our freedom, and to create and establish our constitutional law, than it is for us just to maintain it!

Very few people in Britain, America and Israel are willing to die to defend their rule of law. Our generals know that we lack the will to win any hard-fought battle—even if it relates to our own freedom.

These three nations are leading the war against terrorism. But they lack the spirit or the will of our forefathers. That is why they are losing that war!

God gives the will to fight and conquer only to those who keep His law. It is a will that He breaks if we disobey His law (Leviticus 26:19).

We dare not take this vitally important subject lightly. Everything is at stake!