From the Trumpet’s earliest editions, our editor in chief has focused readers’ attention on specific prophecies about Iran and the Middle East. The Iraq War has shown us how these may be fulfilled. 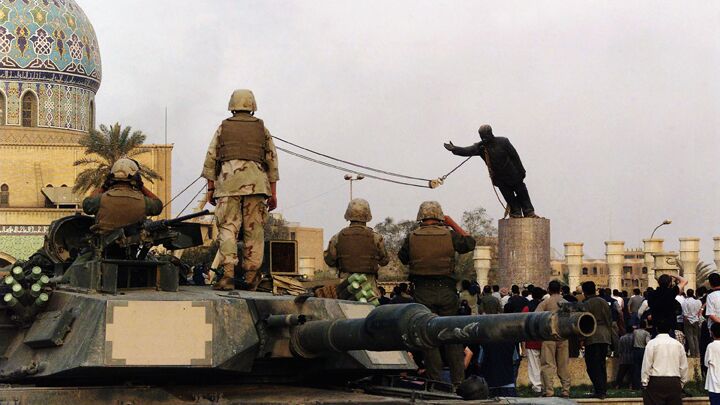 From the Trumpet’s earliest editions, our editor in chief has focused readers’ attention on specific prophecies about Iran and the Middle East. The Iraq War has shown us how these may be fulfilled.

It is hard to understand the real meaning of world events as they occur. Media and technology open to us oceans of information, but to discern what is important can be difficult. Often, only with the benefit of hindsight can we begin to make out the significance.

However, there is something that can eliminate those limitations in our perspective and give us deep insight into what we are really witnessing. It can give us a map, setting those truly monumental events and trends in stark relief from everything else.

What is it? It is Bible prophecy—prophecy delivered to us by the great God, who forecast with accuracy what major events would unfold at the end of this age of man. “I am the Lord: that is my name: and my glory will I not give to another, neither my praise to graven images. Behold, the former things are come to pass, and new things do I declare: before they spring forth I tell you of them” (Isa. 42:8-9).

We need not be ignorant of these prophecies. Elsewhere in His Word, God promises, “Surely the Lord God will do nothing, but he revealeth his secret unto his servants the prophets” (Amos 3:7). This is the perspective that this magazine takes in its news analysis.

Events in Iraq and the rest of the Middle East provide gripping testimony of the power of predictive analysis of world events based on Bible prophecy.

To understand, let’s revisit some statements printed in the Trumpet over the course of its 13-year history.

Herbert W. Armstrong established the Worldwide Church of God. But upon his death in 1986, the Church radically departed from his teachings. In December of 1989, Gerald Flurry founded the Philadelphia Church of God to return to and preserve those truths originally taught by Mr. Armstrong.

The first copy of the Trumpet was issued just two months later—in February of 1990.

In the fifth edition of the Trumpet, September/October 1990, appeared the headline, “King of the South—Is He Now on the World Scene?” In this article, Mr. Flurry dramatically changed the Church’s thinking about a pivotal prophecy in the book of Daniel.

“Herbert W. Armstrong prophesied for decades that we should focus on the Middle East. That is where the world order would begin to unravel—triggering World War iii!” he wrote.

“Mr. Armstrong gave us an outline of prophecy that has been fulfilled precisely. However, his understanding of the king of the south was incomplete. Partly because he couldn’t see what we see today, Mr. Armstrong erred about when this king would appear on the world scene. … God is now leading the Philadelphia Church of God to the correct understanding. That is necessary because of what is happening on the world scene this very moment!

“Egypt was the king of the south in past history. But who is this mysterious man and nation today? This king is a key player in the book of Daniel—and at the very end time.”

Mr. Flurry then quoted this important prophecy—Daniel 11:40: “And at the time of the end shall the king of the south push at him: and the king of the north shall come against him like a whirlwind, with chariots, and with horsemen, and with many ships; and he shall enter into the countries, and shall overflow and pass over.” He commented, “Mr. Armstrong saw Hitler marching in World War ii and believed it was a fulfillment of this verse. Then the tide of World War ii began to change. Immediately he began to preach that Germany would rise again! He did that because of what is prophesied in God’s Word! But he continued to think that Daniel 11:40 occurred in World War ii. Actually it’s a prelude to World War iii.”

Mr. Flurry locked in on this scripture from the very beginning of the Trumpet’s existence. In the time since then, this has proven to be one of the pillar prophecies driving world events!

In 1990, it appeared that the strongest leader in the Mideast was Saddam Hussein. Mr. Flurry speculated that Hussein and Iraq might fill the king of the south role. But he knew, based on Daniel 11:40, that whoever this king was, he would have the will to push at the king of the north, which Mr. Flurry knew to be the rising European Union.

His September/October 1990 Personal continued, “The Gesenius Hebrew and Chaldee Lexicon to the Old Testament says the word push means ‘to strike—used of horned animals,’ or, ‘to push with the horn.’ It is ‘used figuratively of a victor who prostrates the nations before him.’ It also means, ‘to wage war with anyone.’ Push is a violent word! …

“That violent push has not occurred in recent history. No such push has caused the king of the north to respond in kind—yet! But the stage is being set—right now—for this to occur!”

How right he was.

As early as the July 1992 Trumpet, his analysis of events began to turn Mr. Flurry’s attention from Iraq to Iran.

When reports emerged of Iran gaining nuclear weapons from the former Soviet republic of Kazakhstan, this altered the landscape of the Mideast drastically. “This is a frightening development and our government knows it!” he wrote. “The U.S. plan to stop nuclear proliferation has failed! Kazakhstan, an Islamic nation, gave nuclear weapons to another Islamic nation, Iran. Their Islamic faith usually gives them a fierce loyalty to each other.

“Much of the world is unaware of what a powerful and dangerous force the Islamic camp is becoming.”

What Mr. Flurry wrote a little further down is interesting: “The king of the south could rule Iraq or Iran or both countries. But it is looking more now like Iran may produce this king.” Already he was indicating the possibility of Iran actually gaining control of Iraq.

He then quoted the Islamic Affairs Analyst of May 13, 1992, which focused on Iran’s aggressive regional ambitions: “The main strategic aim of Iran is to dominate the Persian Gulf and environs. An important step in achieving this goal is to gain undisputed leadership of the radical Islamic camp.” Mr. Flurry commented, “It looks very much like the end-time king of the south will rule the radical Islamists! Iran is a natural leader for many of them today. Iran also has a goal to lead this group.”

This was all printed before these key players were making much of a splash in the mainstream press.

An Islamic King of the South

One year later, Mr. Flurry’s conviction that Daniel 11:40 would be fulfilled by Iran leading a confederation of Islamist peoples was much stronger.

“These verses point to a king of the south that is yet future. And I believe all indications point to radical Islam, headed by Iran as this king.”

Within this article he focused on the importance of oil as a means for the king of the south to consolidate power. He quoted a November 7, 1992, New York Times article that said, “The political significance of a revitalized oil industry, although not clearly spelled out by Iranian officials, is obvious. Becoming second to Saudi Arabia as a world oil power, Iran expects to further its greater ambition of being the most important regional power in the Persian Gulf, a long-held foreign-policy objective.

“More troubling to other countries in the area and to the West is the other side of Iran’s plan to achieve this objective: a huge rearmament program, financed largely by the new oil money.”

Mr. Flurry then commented, “This means Iran could control the oil of other Middle East oil producers as well.”

All of these statements take on greater significance in light of the United States’ recent action in Iraq.

Then, in December 1994, Mr. Flurry wrote a Personal with this provocative headline: “Is Iraq About to Fall to Iran?”

“Iraq’s economy is in near ruin because of the United Nations embargo,” he explained. “Iraq sits on top of the world’s second-largest oil reserve, behind Saudi Arabia. But they are unable to sell that oil and buy food and other essentials.

“Intelligence reports also state that there is high-ranking discontent in the Iraqi military. However, they fear to revolt because the country is ruled by a minority of Sunni Arabs. The Shiite Arabs compose the majority of the population in Iraq. If the Shiites should get control, there could be a bloodbath similar to the one in Rwanda.

“The Shiite Iraqis have been encouraged to revolt by Iran, which is almost totally Shiite.” Read the following article, “Is Iraq About to Fall to Iran?” by our editor in chief about the media reports that have emerged since the Second Gulf War which verify the truth in this analysis.

Now notice this stunning prediction: “The most powerful Arab country in the Middle East is Iran. Can you imagine the power they would have if they gained control of Iraq, the second-largest oil-producing country in the world? If so, there seems to be little doubt that Iran would lead the king of the south (Dan. 11:40).

“Such a takeover by Iran would shock the world—especially Europe. It would be a strong impetus for Europe to unite quickly. Such a move would, in all likelihood, give Iran power to cause a sizable increase in the price of oil. This could help trigger a collapse of the Western world’s weak currencies. This in turn could cause Europe to quickly unite into the most powerful economic bloc in the world. That very event is prophesied to occur in your own Bible!”

Iran fought a bloody, costly and inconclusive war with Iraq throughout the 1980s. That country can only be happy over the recent removal of Iraq’s Sunni Muslim leadership, so long a thorn in its flesh.

Is it possible that the United States has unwittingly cleared the way for Iran to fulfill its long-held regional ambitions? Might Mr. Flurry’s predictions actually be expedited in their fulfillment, with the U.S.’s help?

As Amos 3:7 explicitly states, God ensures that His true servants are alerted to the most important trends that will affect world events. We cannot afford to ignore these powerful statements in the Trumpet’s history. These predictions resulted from prayerful study and comparison of several relevant Bible prophecies with current events.

However, God does not give us a complete picture all at once. As the Apostle Paul said, “now we see through a glass, darkly” (i Cor. 13:12). God requires of us, “Watch ye therefore, and pray always, that ye may be accounted worthy to escape all these things that shall come to pass, and to stand before the Son of man” (Luke 21:36). The Apostle Peter said that “We have also a more sure word of prophecy,” but explained how our understanding of it becomes more clear the closer we get to Christ’s return to Earth (ii Pet. 1:19). As events unfold, we see better how specific prophecies will be fulfilled.

Suddenly, the American-led coalition has taken Iraq out of the picture in the Middle East, much more quickly and decisively than the first Gulf War, or the sanctions imposed afterward. The landscape has been drastically changed. Mr. Flurry’s following article will better show you how these events will play into the prophetic picture for the region.

Iraq—and Iran—deserve our closest scrutiny in the months ahead. Daniel’s vision about the end-time rise of the king of the south is living prophecy!

From The June 2003 Philadelphia Trumpet
View Issue FREE Subscription
Next