Whoops! Right under everyone’s noses, they scored a monopoly on a rare resource we all use. In a swoop, this could bring the world to its knees. 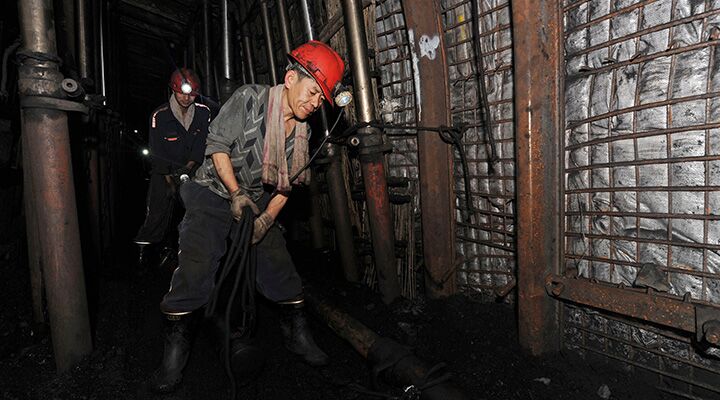 Whoops! Right under everyone’s noses, they scored a monopoly on a rare resource we all use. In a swoop, this could bring the world to its knees.

Imagine if Walmart sold 97 percent of the world’s potatoes. It would have complete control over the sale of fries, chips and potato salad. There would be an outcry.

Think of the power it would have. If a district raised taxes or passed labor laws that Walmart didn’t like—bam: no potatoes. McDonald’s would be selling a Big Mac and fries without the fries.

China has this type of monopoly. Not on potatoes, but on rare earth metals, the vital ingredients of the technological revolution. These minerals are used in small quantities in a host of products from iPods to hard drives, guided missiles to smart bombs. And China is using its control of 97 percent of the industry to hold the world to ransom.

Its ownership of these metals is just a part of its wider plan to gain security by controlling the world’s resources. On October 18, China cut off exports of rare earth minerals to Europe and the United States.

This is economic war.

China had cut Japan off over a month earlier, using rare earths to force Japan into a humiliating surrender. On September 8, a Chinese fishing boat rammed two Japanese coast guard ships near islands claimed by both China and Japan. The skipper, Zhan Qixiong, was arrested. The Chinese were livid. They arrested four Japanese citizens, cut off all cabinet-level contact with Japan, and instructed travel agents not to offer holidays in Japan. More importantly, according to the Japanese government, they cut off all shipments of rare earth minerals.

Now it may be America’s turn. The New York Times published a story on October 19 quoting three anonymous industry officials saying that China had quietly stopped all rare earths shipments to the U.S. and Europe. “The embargo is expanding” beyond Japan, said one official. China has denied there being any embargo. The spokesman for the Chinese Embassy in Washington claimed that his country is just implementing tougher environmental standards on the rare earth mining industry.

This cutoff may be China’s response to an investigation, launched by the U.S. in October, into whether China is breaking World Trade Organization rules by restricting clean energy imports and subsidizing its clean energy exports.

Will America be the next nation forced by China into a humiliating climb-down?

How to Get a Monopoly

For years, China has been laying the foundations for control of rare earth minerals—elements with an atomic number between 57 and 71, plus scandium and yttrium. China woke up to their usefulness long before any other government. In the 1960s, it started trying to get all the rare earths it could out of mines in Inner Mongolia.

During the 1980s the government offered subsidized loans to rare earth miners and similar industries. Production increased by 40 percent during the decade. The Chinese Society of Rare Earths was founded, the organization that, to this day, publishes the only two scientific journals dedicated to rare earth elements. As China gains a foothold in this field of research, interest in the U.S. has waned, according to Prof. Karl Gschneidner Jr. of Iowa State University.

In 1992 Deng Xiaoping, the late leader of China, said, “There is oil in the Middle East; there is rare earth in China.” His successor, Jiang Zemin, went even further, saying China must “improve the development and applications of rare earth, and change the resource advantage into economic superiority.”

In the 1990s, then, China quadrupled its rare earths production. Many mining firms ran at a loss, but with unlimited subsidized loans they kept running. In addition, a large number of illegal rare earth mines sprang up, cutting costs by ignoring worker safety. As a result, rare earth prices plummeted. On average, rare earth minerals cost only 5 percent of what they did before China got involved.

The low prices were a boon for the growing high-tech industry. But no other country could compete. Western rare earth companies shut down.

Now China’s control of 97 percent of the rare earth market gives it tremendous power. Over the past year, it has reduced its exports of rare earths, shrinking them from 50,000 tons per year to 30,000 tons. Then in July, the government announced it would export only 8,000 tons for the rest of the year. At the same time, it has raised export taxes for the minerals. Other countries are feeling the pinch.

Governments around the world are only just starting to address the problem. But solving it won’t be quick or easy. In July, the U.S. Congressional Research Service said that developing new rare earth mining projects could take 10 years.

Mining rare earth elements produces radioactive waste, which means that mining companies have to dig through a mountain of paperwork before they can even make a dent in the ground. In Western nations, they face stiff opposition from the environmental lobby. In both the U.S. and Australia—which have some of the biggest rare earth deposits—the governments are changing mining laws, though they haven’t yet released details. The uncertainty is making mining firms reluctant to start new projects in these areas.

Once a rare earth mineral is dug from the ground and separated from the rock and other minerals—a complicated process in itself—it is still only an oxide compound. It must be refined in order to get a pure metal. And China also happens to have a stranglehold on rare earth refining. Since no one else has been doing much refining for 25 to 30 years, China holds a clear technological edge in this area.

Even with determined effort, it would take several years to pry the rare earth industry out of China’s control.

Nations worldwide are waking up to the need for security in the supply of a whole host of resources. A recent EU report warned that land grabs could erupt as nations scramble for minerals globally. South Korea has revealed plans to use its pension and sovereign funds to secure access to rare metals; it says it will even direct its foreign aid monies to countries that can return the favor with access to the precious resource.

The need for security goes beyond even metals and minerals. The Oakland Institute, an American think tank, says that China is “seeking to acquire land as part of a long-term strategy for food security.” It says Japan and South Korea, as well as Saudi Arabia and other Gulf states, are doing the same.

Australia and New Zealand are especially worried about China’s appetite for farmland. In June, a Tasmanian real estate agent reported that China had a strong interest in dairy farms in the north of the island. Bright Food Group, a firm controlled by the Chinese government, bought New Zealand’s third-largest dairy processing company and owner of 15 farms, Synlait.

Prof. Zhangyue Zhou of James Cook University’s School of Business said that China is buying up land overseas in order to secure a food supply for the nation. He warned that the farms China is buying will start sending food back to the home country rather than selling it to locals.

“Chinese vultures circle Australian farms,” Australian state mp Robert Brokenshire has warned. In fact, Chinese investment interest in Australia’s farms grew tenfold in the six months before this past April, according to the Real Estate Institute of Australia.

Foreign investment in Australia’s agricultural land is causing many to demand that the government intervene to regulate the purchase. China is also buying up farmland in Africa.

But farmland isn’t the only aspect of agricultural production that China is interested in. A consortium of government-owned Chinese companies is vying to take over Potash Corporation, based in Saskatchewan, Canada. Potash Corp. produces 20 percent of the world’s fertilizer and sells 45 percent of its goods to North American farmers. Experts worry that should China buy it, the fertilizer would be redirected to China.

Potash, a key component in fertilizer manufacture, is becoming scarcer. Some warn that the modern era of cheap food is coming to an end. China is expected to spend $15 million a year looking for domestic potash supplies.

“We Are at Economic War”

China is buying up the production of raw materials the world over, from food to rubber to iron and steel. It may not own anywhere close to 97 percent of the world’s steel or rubber production capacity, but it appears to be aiming at self-sufficiency in all essential resources. Most other countries have nowhere near that capability.

At the same time, Beijing is working hard to increase its naval power. After all, if it owns natural resources around the world, it has to be able to keep shipping lanes open during a crisis.

This kind of self-sufficiency puts China in a strong position in the event of a trade war—or even a hot war. The U.S., by contrast, cannot even produce important armaments without China’s cooperation.

Of course, China isn’t the only nation seeking natural resources. Middle Eastern and other Asian nations are scouring the Earth for them, and Europe is joining in the fray.

Even staunchly free-market Japan is getting involved. Foreign Minister Katsuya Okada spent the last year visiting heads of state in mineral-producing countries to secure a supply of minerals for his country. “Until recently, the government took the attitude that this was something best left to market forces,” he said, “but the world has changed dramatically and the government cannot just sit back anymore.”

“We are at economic war,” said Jack Lifton, an expert on rare minerals. “The world where you could get everything for a price is history. And the West has been sound asleep on this. The level of ignorance about the upstream of mineral supply … is just out of this world.”

It seems the whole world—apart from the U.S., Britain and its daughter nations—has woken up to this reality.

China is prophesied to play a key role in end-time events. By securing so many strategic resources, it is ensuring that it can remain a great power even when the world falls apart.

For more about China’s future, request our free booklet Russia and China in Prophecy.