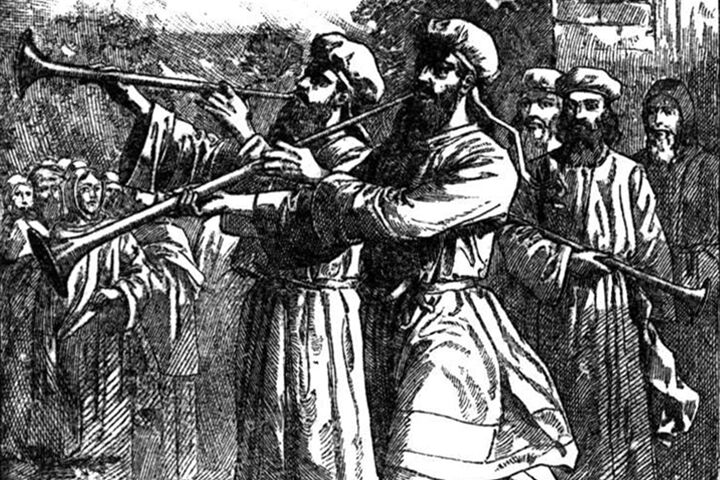 The festival of Trumpets pictures a trumpet blast that will change this world forever!

“A memorial of blowing of trumpets” is what God called the festival that occurs first day of Tishri (Leviticus 23:24)—or a “memorial of teruwah,” as the Hebrew reads.

Two types of trumpets were blown on this day in ancient Israel. The first was the chatsoserah—the straight, long silver trumpets blown only by priests and used for a variety of occasions (one to announce the new month). The second was the shofar, made from a ram’s horn. The Israelites were to mark this particular day as a memorial of the significance of the trumpets to them physically and symbolically.

What was that significance?

Both of these trumpets were used in war, and both had roles in celebratory events.

That relates quite well to teruwah, which has a root meaning of shout, cry, blast. Gesenius’ Hebrew-Chaldee Lexicon says it can mean joyful noise, rejoicing or a warlike cry for battle. These definitions seem to contradict themselves.

Of the 36 times teruwah is used, it is referenced about a dozen times in relation to alarm or war, though it is also translated as “joy” or “shout for joy” 16 times. So is it a memorial for blasting, crying out—as in war—or a joyful, jubilant sound? Some translations render it a “memorial of alarm,” some a “memorial of triumph.” Which is it?

When you understand what this day pictures, it makes perfect sense. This day points us to the blast of the seventh trumpet angel. It is a dreadful blast of fierce warfare and a grueling fate for rebellious man. Yet, it is also a wonderful blast ushering in the gathering of God’s people—spiritually and physically.

Psalm 89:15 proclaims: “Blessed is the people that know the joyful sound: they shall walk, O Lord, in the light of thy countenance.” The Hebrew word for the phrase “joyful sound” is teruwah. Let us examine the use of both types of trumpets, and understand how they represent a joyful sound for those who understand God’s plan. Let us see how this day should spur us to even greater joy and enthusiastic praises of our great God!

Numbers 10 explains in detail what role the silver trumpets played in ancient Israel. Not only were they a general gathering device and announcement of the new moon, they also had a function in Israel’s battles.

“And Moses sent them to the war, a thousand of every tribe, them and Phinehas the son of Eleazar the priest, to the war, with the holy instruments, and the [silver] trumpets to blow in his hand” (Numbers 31:6). These trumpets served a tremendous function for organizing troops in battle.

The War Scroll of Qumran, part of the Dead Sea Scrolls, contains a document called “The Rule of Battle,” which sheds more light on the use of these trumpets.

Alfred Sendrey comments on this “Rule of Battle” in his book Music in Ancient Israel: “This ‘Rule of Battle’ intimates that the priests and Levites have been assigned quite an important role in the battle, namely to direct the operations of the troops in the midst of the combatants. In giving appropriate signals with trumpet and shofar blasts, they marked the different phases of engagement. Priests and Levites as strategists—a peculiar role, though not entirely novel. Looking into the purely musical aspect of this detailed ‘order of battle,’ we realize that the priest-strategists had at their disposal seven different kinds of blasts for the assembly, the advance, the attack, the ambush, the pursuit, the reassembly and the recall. Such blasts must have had some conspicuous rhythmic or other characteristics, without which their specific purposes could not have been recognized by the fighting men.”

Though the above is not canonized truth, it certainly gels with what Numbers 31:6 states, that the priest would blow (Hebrew teruwah) with these trumpets. God organizes our spiritual warfare in a similar way today—with priests as the strategists in this war, under their pastor general. The idea that there were seven different trumpet calls is indeed interesting given the seven trumpet blasts that occur during the Day of the Lord (see Revelation 8-9, 11).

The shofar, though mostly connected with the sound of alarm, also had more functions than just striking fear into the nation.

Of its 72 uses in the Old Testament, four times it is used as a general gathering device, four times as a precursor to major announcements (as attention-getters), three times when referring to the voice of God, and six times to refer to praise, joy or celebrations to God (see Leviticus 25:9; 1 Chronicles 15:28; 2 Chronicles 15:14; Psalms 98:6; 150:3).

Psalm 81:1-3 say, “Sing aloud unto God our strength: make a joyful noise unto the God of Jacob. … Blow up the trumpet [shofar] in the new moon, in the time appointed, on our solemn feast day.” The new moon refers to the Feast of Trumpets. It’s a day to blow the shofar, not to sober the people, but for singing aloud with a joyful noise!

Psalm 98:6 says the sound of both the silver trumpets and the shofar was to “… make a joyful noise before the Lord, the King.”

The sound of the shofar could be joyful blasts heralding a king. In fact, five references of shofar in the Old Testament refer to coronations—namely those on the throne of David. The blast of the seventh trumpet angel heralds the coronation of Jesus Christ to return to the throne of David and assume rulership of all the kingdoms of the Earth! (Revelation 11:15; Isaiah 9:7). What joy that means for God’s people!

This angelic trumpet blast also indicates war. “And the nations were angry, and thy wrath is come, and the time of the [nations], that they should be judged, and that thou shouldest give reward unto thy servants the prophets, and to the saints, and them that fear thy name, small and great; and shouldest destroy them which destroy the earth” (Revelation 11:18).

The nations will not be happy to see Christ, as it is their time to be judged. Their rule will end. Christ Himself said that, at His Second Coming, “shall all the tribes of the earth mourn …. And he shall send his angels with a great sound of a trumpet” (Matthew 24:30-31). The trumpet blast will cause great “mourning” in deceived men.

The Herbert W. Armstrong College Bible Correspondence Course, Lesson 32, says, “These terrifying events make the Feast of Trumpets a solemn day. But to those who have begun to obey the government of God now, the Feast of Trumpets is also a time of rejoicing, because it pictures the time when today’s lawless societies will be abolished and the Kingdom of God will be established on Earth by Jesus Christ!”

Note the fate of those who vainly plan to fight Christ: God “shalt break them with a rod of iron; thou shalt dash them in pieces like a potter’s vessel” (Psalm 2:9). That is why, when Christ comes, they mourn.

But what about the righteous? The righteous sing praises to God because they understand the meaning of this day! (Psalm 68:3-4).

Then there are those whom God will bring out of captivity at the blast of the “great trumpet” (Isaiah 27:13). Those who survive this terrible time of war will be gathered by the sound of that great shofar.

Psalm 68:21-25 show the procession of these people out of captivity, the shame that has befallen their enemies, and the joy with which they will enter into the Promised Land. This exodus from captivity will be a time of great joy and singing (Jeremiah 31:7-8; Isaiah 35:10), all begun with that grand trumpet blast!

Also when the seventh trumpet sounds, pictured by the Feast of Trumpets, the dead in Christ will be resurrected! The sound of the trumpet will initiate the first resurrection. John 5:28 says “all that are in the graves shall hear his voice.” God’s voice is likened to a shofar blast in Exodus 19:16-19 (and in the New Testament: Revelation 1:10; 4:1). Even God’s prophets throughout history were symbolically to use their voices like trumpets (Isaiah 58:1). By lifting their voices like trumpets, God’s prophets were emulating God’s voice! Today, when we trumpet this warning, that is a type of God speaking.

Until that point in history, God’s voice will have been trumpeted through His work. But finally, on this day, God will speak—and, just as at Mt. Sinai, it will be an earthshaking event.

A Day of Great Joy and Praise

Blessed are they who know the joyful sound! We should sing aloud to God because of this understanding! Revelation 11:15 says, “And the seventh angel sounded; and there were great voices in heaven, saying, The kingdoms of this world are become the kingdoms of our Lord, and of his Christ; and he shall reign for ever and ever.”

The day of Trumpets is a day of joyous shouting! A day to praise god!

We read in verses 16-17 that the 24 elders “which sat before God on their seats, fell upon their faces, and worshipped God, Saying, We give thee thanks, O Lord God Almighty, which art, and wast, and art to come; because thou hast taken to thee thy great power, and hast reigned.”

We should strive to be as thankful as these 24 elders are! We should be worshiping God with more fervency because we understand that Christ is about to rule this Earth.

“God is gone up with a shout [teruwah], the Lord with the sound of a trumpet [shofar]. Sing praises to God, sing praises: sing praises unto our King, sing praises. For God is the King of all the earth: sing ye praises with understanding. God reigneth over the heathen: God sitteth upon the throne of his holiness” (Psalm 47:5-8).

Verse 7 would be better translated, “sing praises every one that hath understanding.” We should not only understand the blast, or teruwah, of both kinds of trumpets, but the meaning of their sounds should instill hope in us! It is a joyful sound to those with understanding.

This knowledge and understanding of the Feast of Trumpets should spur us to greater praise, worship and gratitude toward our great God and coming King, Jesus Christ!