Politicians embracing anti-immigration platforms are proving that the right wing is all the rage. 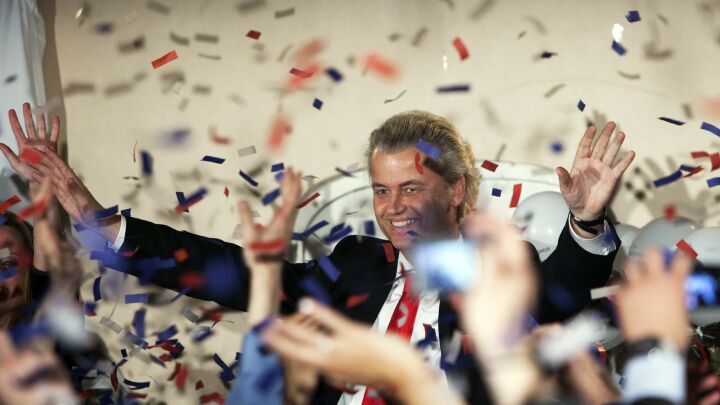 Politicians embracing anti-immigration platforms are proving that the right wing is all the rage.

If Muhammad were alive today and living in the Netherlands, Geert Wilders says he would have him “tarred and feathered as an extremist and deported.” Wilders calls the Koran “an inspiration for murder” and wants radical mosques shut down. In 2008, he produced a 15-minute film that links violence-promoting passages from Islam’s holy book with quotes from radical Islamic preachers and footage of Islamic terror attacks.

Unsurprisingly, since then, Wilders has had to be protected by an armed guard at all times due to death threats from Muslims. He was once banned from visiting Britain—though that ban was quickly overturned—and even his own government is prosecuting him for inciting hatred.

What makes this especially awkward is that he is a parliamentary leader, and his popularity and power are growing.

Wilders’s anti-immigration Party for Freedom (pvv) won a stunning 24 parliamentary seats out of 150 in the Netherlands’ national elections on June 9. This nearly tripled the nine seats the pvv had previously.

More importantly, it put Wilders in a remarkably strong political position. “We really want to be part of government, we want to participate,” Wilders said. “I don’t think the other parties can escape us.”

Apparently not. The pvv’s sturdy showing in the election was made even more potent by losses for other parties. The Christian Democratic Appeal, which had led in parliament, suffered a shocking defeat: It plunged from 41 to 21 seats, going from the largest party in parliament to the fourth largest. The conservative Liberal Party won 31 seats, closely followed by the Labor Party, with 30 seats.

The Netherlands’ election-day stunner is just one example of a continent-wide trend. Europe’s political landscape is in turmoil. Once-mighty political parties are being relegated to third or fourth place. Fringe parties are rising.

Of these, Wilders’s party is probably the most benign; his policies could be seen as a reasonable response to problems caused by Islam and immigration. Many of the other fringe groups, however, are neo-Nazis.

In April, the far-right, anti-Semitic party Jobbik won 17 percent of the vote, and 26 seats, in Hungary. Jobbik has strong links with the paramilitary Hungarian Guard; its leader, Gabor Vona, was one of the Guard’s co-founders. The Guard, whose uniforms copy those of Hungary’s fascist party during World War ii, has attacked Roma settlements and vilified Jews. This radical nationalist movement was banned in 2008.

In September 2008, two pro-Nazi parties won a third of the seats in Austria’s national election. Six months later, Austria’s main far-right party, the Future of Austria (bzö), won a landslide victory in regional elections in the state of Carinthia—taking 45 percent of the vote. As well as being anti-Semitic, both parties are anti-Islam.

The head of the bzö, Stefan Petzner, has said he will not deviate “one millimeter” from the path of his predecessor, Jörg Haider, who led the party until his death in 2008. Haider admired SS soldiers as men of honor and once praised Hitler’s economic policies as being superior to those of the current Austrian government. He called Nazi concentration camps “punishment camps.” Spiegel Online reported that his popularity derived from his “constant, often xenophobic, attacks on immigration and his vocal opposition to accelerating European Union integration” (March 2, 2009).

Elsewhere on the Continent, mainstream parties are enacting laws that would have once been seen as extreme. Switzerland banned the construction of new minarets after 57.5 percent of voters supported the measure in a national referendum. In Belgium, a ban on wearing the burka has just become law. France is considering a similar ban.

Is Europe All Right?

Despite their meteoric rise, these extreme parties are far from being able to form national governments. But they represent a trend—an atmosphere within Europe—much larger than the number of their voters might suggest.

For years, liberal European politicians have bent over backward to accommodate Muslims, who have migrated to the Continent in enormous numbers. Now, many Europeans are surveying the results of that policy and don’t like what they see. Frustration and anger over what they perceive as an assault on local and national traditions is bubbling to the surface.

A failing economy only aggravates the problem. While native Europeans fear for their jobs and the ranks of the unemployed swell, they are increasingly troubled by the growing number of immigrants in the workforce.

Politicians are pushing these buttons like virtuosos. “[I]f the 2008 economic crisis has revealed one thing,” wrote think tank Stratfor, “it is that nationalism is slowly becoming politically convenient, and a successful political strategy” (April 13).

“We are witnessing a process in which the elite—once happily co-opted by EU solidarity—turns toward nationalism,” Stratfor continued. “We can therefore expect to see not only a rise in far-right nationalism, but also a reorientation of center-right parties … toward a more traditional nationalist platform.”

This is not a problem that involves a few fringe parties. Even the “elite” and “center-right parties” are shifting toward the extreme. This would suggest that the surge of right-wing groups is just a foretaste of things to come.

Last year in Italy, for example, the mainstream center-right party, the People of Freedom bloc, merged with the pro-fascist National Alliance party, whose leaders have openly praised Benito Mussolini. Even Italy’s Prime Minister Silvio Berlusconi has defended Mussolini, saying “Mussolini never killed anyone,” and “Mussolini sent people on holiday to confine them.”

Nationalism: Hate for Others

Wilders has said that the Western world is in “an undeclared war”—a clash of civilizations. With mainstream parties supporting burka bans, European governments are starting to push back against Islam on the domestic front.

Nationalism is tied to war. French leader Charles de Gaulle once said, “Patriotism is when love of your own people comes first; nationalism, when hate for people other than your own comes first.”

When European voters see immigrants threatening their way of life, their traditions and their prosperity, they will start looking for a champion of their way of life. Currently they’re finding that in nationalistic parties. But another entity is positioning itself to become the standard-bearer for Europeans: the Roman Catholic Church.

The church is telling Europe that it must return to its Catholic roots or be overrun by Islam. “Europe has denied its Christian roots from which it has risen and which could give it the strength to fend off the danger that it will be conquered by Muslims—which is actually happening gradually,” said the outgoing archbishop of Prague, Cardinal Miloslav Vlk, in an interview published January 6. “If Europe doesn’t change its relation to its own roots, it will be Islamized.”

As anti-Islamism becomes more mainstream, expect the Catholic Church to set itself up as the bastion of European values. The surge in anti-Islamic popularity shows that support for such a move exists.

Daniel 11 prophesies of a “king of the north” attacking a southern king “like a whirlwind.” This king of the north is a European empire, and the king of the south, radical Islam—led by Iran (for more information and proof of this, write for our free booklet The King of the South).

Perhaps you can’t imagine Europe attacking Iran. But five years ago, could you imagine minarets being banned in Switzerland by popular vote?

It is already popular in Europe to stand up to Islam when provoked. All that is needed is a major international provocation. Europe is showing that it will react.

Imagine a Europe led by nationalistic parties, looking to an imperialistic, anti-Islamic Catholic Church. This would be a Europe completely different to that of the past 50 years. It would be more akin to the Europe of Hitler, Napoleon, the Habsburgs and Charlemagne.

This will be a Europe that is more than simply unfriendly to Muslims. History and prophecy show that this will be a Europe where a common identity—the Roman Catholic religion—is imposed by force. Sunday worship will be mandatory. Anyone who thinks differently will be persecuted.

Many of these parties that are attracting 15 or 20 percent of the vote are violently racist. Wilders’s party, which simply opposes Islam, is actually in the minority: The majority of right-wing fringe parties are anti-Semitic and would gladly bring back concentration camps.

Is that unthinkable? These parties are already coming close to being a part of national and regional governments! Their ideas are becoming mainstream. Their thoughts point to Europe’s future.

More nationalistic sentiment may lead to increased squabbling and division over the short term. But as the economy totters, Russia rises, and the world grows more dangerous, European nations will be driven together—with right-wing leaders at the helm. The Catholic Church is waiting to step in and create a common European identity for the new nationalism to revolve around.

The rise of the right is just beginning. Its political gains today are a harbinger of a new, nationalistic, anti-Islamic, expansionist Europe to come.