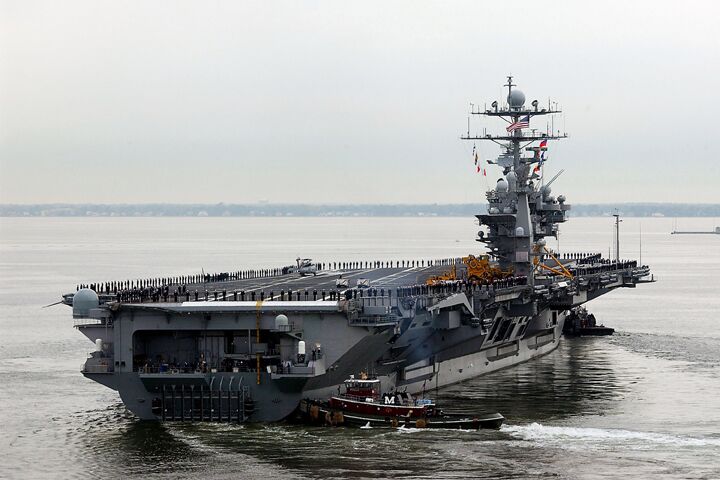 Germany gains “crucial knowledge” about a pillar of American defense.

A German ship has been deployed as part of an American carrier strike group for the first time. The Hessen has been training with the Americans at the Norfolk Marine Naval Station and will soon cross the Atlantic with the aircraft carrier uss Harry Truman, a guided missile cruiser and several destroyers.

The Hessen’s mission is to support the Americans’ air surveillance operations.

America’s navy is centered around carrier strike groups—a flotilla of ships designed to protect an aircraft carrier. They are the backbone of the Navy. Ultimately, the Navy is America’s first line of defense against an invasion.

Now, America is letting a foreign power become intimately acquainted with the workings of the mainstay of its defense.

William Natter, a deputy under-secretary of the U.S. Navy, acknowledged that there are many details that the Germans and Americans can only learn about each other in this kind of environment. For example, they encountered some difficulty trying to refuel an American helicopter aboard the German ship. “It wasn’t until the aircraft landed on the fantail that we realized that the refueling nozzle for the (U.S.) helicopter was on a different side than on the German helicopters,” said Natter. The Germans’ hose couldn’t reach.

Deutsche Welle states that “crucial knowledge such as [the] fact that German ships run on diesel while the Americans power their vessels with jet fuel often comes to light only during practice sessions.”

Of course, they’re right. The German Navy will now possess all kinds of crucial knowledge and intricate details about the strengths and weaknesses of one of America’s most important pillars of military power.

But can Germany be trusted? The Bible prophesies that America and Britain today will put their trust in their “lovers.” The outcome: “your lovers will despise you; they will seek your life” (Jeremiah 4:30; New King James Version).

Even common sense should tell America’s military that it shouldn’t trust any nation, no matter how friendly, with too much “crucial knowledge.”

Trumpet editor in chief Gerald Flurry wrote on this subject in May 1999:

Are we so vain that we have failed to learn from the history of our forefathers? Have our leaders become so proud that they fail to learn from the precious lessons of history? Have we forgotten that Germany plunged this planet into two world wars which killed between 60 and 70 million people?

At the time of writing, Mr. Flurry was addressing the decision to allow Germany to establish an air base in Alamogordo, New Mexico. This applies equally to Washington letting Germany know the inner workings of the American Navy. “And what if our gamble with Germany today is dead wrong?” Mr. Flurry wrote. “As Churchill said, it is a mistake you make only once! All Americans will pay the deadly price! It gives us the potential to be attacked from within.”

Germany had a history of striking down nations with little or no warning before World War i! Churchill knew their history. “The wars of Frederick and of Bismarck had shown with what extraordinary rapidity and suddenness the Prussian nation was accustomed to fall upon its enemy …. Obviously, therefore, the danger of a ‘bolt from the blue’ was by no means fantastic” [Winston Churchill, World Crisis].

The Germans had a history before World War i of attacking enemies with “rapidity and suddenness”—like a “bolt from the blue.” That is why what America is doing is so dangerous. History proves that Germany cannot be trusted in this vital area of national security. For Mr. Flurry’s full warning on this subject, see our article “Alamogordo: A Mistake You Only Make Once.”