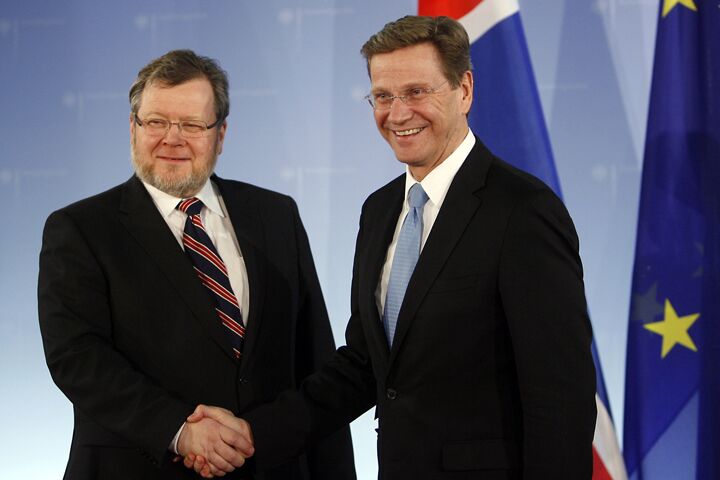 Less than a year after the German high court gave Berlin unprecedented powers to influence EU law, Germany is taking over the EU’s enlargement policy.

Less than one year after the watershed ruling from Germany’s Federal Constitutional Court that empowered Germany’s parliament to trump EU law, Germany is using the ruling to force the European Union to conform to its will.

The issue Germany has chosen to test this extraordinary power not given to any other EU member nation is Iceland’s bid to join the EU.

The EU’s decision to consider Iceland as an official candidate was expected to be made in a late March summit, following a favorable recommendation from the European Commission. It was delayed, however, to give the German parliament time to examine the Commission’s opinion. For Iceland to be considered as an official candidate for EU membership, several German parliamentary committees must consent to the move.

According to the German high court’s ruling last June, the German parliament must participate in the creation of any EU laws in areas deemed of major importance, such as enlargement.

Germany is the only EU member nation with the remarkable power to force EU law to conform to Germany’s law. It makes Germany the real boss of what was supposed to be a federated European power.

It is interesting that the first time Germany has forced the EU to consult the Bundestag in an expansion of EU power is in the matter of enlargement—but not even if a nation will become an actual member, but in whether it will be considered an official candidate. Just look at Turkey’s bid for membership to see how meaningful being an official candidate is.

This area of EU power typically doesn’t have a direct impact on any of the current EU members, and so Germany chose to try out its new power in an uncontroversial way. This is apparent by the lack of headlines devoted to Germany’s first use of its national “supremacy clause.” The other heavyweights of the EU, France and Britain, are not calling foul, and none of the other member nations seem concerned that the EU’s enlargement policy was just hijacked by Germany.

No sirens, no alarm bells; not one nation is standing up to Germany’s one-sided decision-making powers. When state governments tried to nullify the laws of the federal government of the United States, likewise over enlargement, it propelled the nation to civil war.

Imagine if 49 states allowed Texas to determine which national laws can be passed!

Instead, more attention is focused on Iceland’s refusal to pay Britain and the Netherlands over the collapse of the Icesave online bank in October 2008 that wiped out thousands of savings accounts.

The clever German government established a powerful precedent for Germany’s leadership of the EU at virtually no political cost. This precedent will go far in cementing the power it received from its court.

This will work to Germany’s advantage when a vital issue critical to Germany’s interest comes up. Berlin will be able to point back to its handling of Iceland’s bid in order to justify shaping important EU laws according to its own interests.

This enlargement ordeal also highlights just how important the composition of the EU is to Berlin. Germany is already one of the strongest opponents to Turkey’s accession to the EU; now it is even scrutinizing Iceland’s bid just to be an official candidate.

The other side of the enlargement coin is contraction. A precedent has already been set where 10 EU nations can push for new guidelines to allow for a two-tier EU. If such guidelines became law, there is no doubt they would first have to pass through Germany’s parliament. TheTrumpet.com has forecast that the EU will eventually contract to a 10-nation bloc, and there is no doubt Germany will lead it in this direction.

Germany’s control over EU enlargement policy is so dominant, German Socialist member of the European Parliament Jo Leinen received the news of Germany delaying Iceland’s bid with this comment: “Basically, it is all about a power game between the parliament and government in Germany.” It’s not even a matter of contention between the EU and Germany; it’s a debate within the German government alone.

The EU accession process starts with EU foreign ministers unanimously agreeing to forward the application to the EU Commission.

The German parliament’s move to force consultation was to demonstrate that it “wants to be involved at the start, not the end, of important EU-related issues, such as enlargement,” according to Leinen.

So a squabble between the German Foreign Ministry and the Bundestag is dictating the pace of EU enlargement! That is real German power!

TheTrumpet.com has warned for over a decade that Germany will take control of Europe through stealthy means. When most observers and pundits thought it was impossible for more than two dozen European nations to willingly give up their sovereignty to a federal power, the Trumpet said not only would it happen, but it would be done in a way where Germany would reign supreme.

Now not only have 27 member nations voluntarily given up their power to EU laws and regulations, they have done so knowing that one nation, Germany, doesn’t have to play by the same rules. Germany is the boss that will decide the EU’s future.