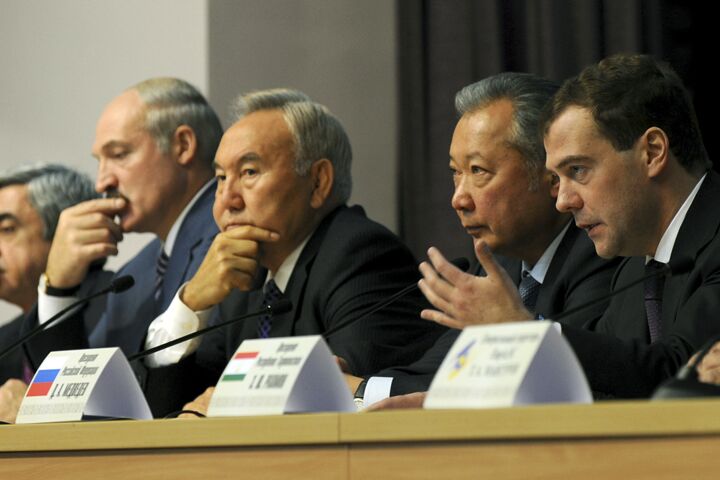 Jan. 1, 2010, marks the start of a customs union between Russia, Belarus and Kazakhstan. This supranational alliance is an important step toward the creation of an even bigger and stronger Eastern alliance.

Today marks the beginning of a new Russian empire. After a decade of discussion, Russia, Belarus and Kazakhstan entered a common customs union on the first day of 2010, cementing Russia’s control over two of its former Soviet satellites. Much like the creation of Europe’s customs union back in 1957, it is a beginning step to the creation of a supranational alliance, with Russia calling the shots.

In a Eurasian Economic Community (eurasec) summit on November 27 in Minsk, Belarus, the presidents of Russia, Belarus and Kazakhstan agreed to create a customs union with common tariffs. eurasec, made up of Russia, Belarus, Kazakhstan, Kyrgyzstan and Tajikistan, is an organization of former Soviet Republics intent on forming stronger ties.

The customs union was set to go into effect on January 1, though the details aren’t finalized and the new regulations are set to phase in over the next year. The union will eliminate customs duties on trade between the three countries and will implement a common external tariff system on exports from the rest of the world.

“We are committed to the further deepening of the integration process in the eurasec area as we thereby confirm as our subsequent goal the creation, no later than Jan. 1, 2012, of a unified economic space of the Republic of Belarus, the Republic of Kazakhstan and the Russian Federation,” the leaders of the three nations said in a joint statement at a meeting in Kazakhstan on December 19.

All three are former Soviet republics so their infrastructure, primarily in the manufacturing, energy and agriculture sectors, is already tightly integrated. While the three kept their de facto free-trade zone after the Soviet Union collapsed, they were free to establish their own tariff system and develop trade relationships with foreign nations without any regulations.

With the new customs union, that freedom is now a thing of the past for Belarus and Kazakhstan. Both nations, hit hard by the global recession, will likely have to raise tariffs on their exports to stay in line with Russia, the dominant power of the three and the nation whose system forms the basis for the new common tariffs. Think tank Stratfor estimates that 90 percent of the new customs regulations will be based on Russia’s customs duties.

Higher tariffs will make imports more expensive for Belarus and Kazakhstan and force them to buy cheaper imports from Russia. This amounts to Belarus and Kazakhstan willingly hurting their own trade and giving up their economic independence to Russia in the name of economic stability. Clearly there is something more than economics pushing this deal.

For all three—especially Russia—the union is a political move. These three nations were the most pro-Soviet at the time of the Soviet Union’s collapse. Beginning a customs union is a starting point for a revival of something similar, with Russia once again at the head.

“The upcoming debut of the customs union, therefore, is not just about Russia exerting its influence in Belarus and Kazakhstan but about Moscow’s attempt to formalize its authority in these countries and lay the groundwork for bolder moves throughout the rest of its periphery in 2010 and beyond,” Stratfor wrote (December 31).

So where will these bold moves occur? Most likely, the next members of this new union will be eurasec members. Kyrgyzstan and Tajikistan have already announced their intention to join the customs union. Armenia, a member of the Commonwealth of Independent States (cis)—a separate, more loosely tied organization of former Soviet Republics—has also expressed interest in joining.

These tiny former Soviet republics already depend on Russia economically, so it’s no surprise that they wish to join. What remains to be seen is what happens with Ukraine, an observer of eurasec and member of the cis. Ukraine is the current battleground in the struggle between Europe and Russia in expanding their empires.

Russian Prime Minister Vladimir Putin, the force behind the current imperialistic Russia, expressed “hope that [other] eurasec colleagues will actively participate in our work and have the opportunity to join the customs union,” in a December meeting of eurasec leaders. Putin didn’t say members, he said colleagues—implying he wants even observer nations like Ukraine to join as well.

Viktor Yanukovych, the front-runner in the upcoming Ukrainian presidential elections, said he would initiate Ukraine’s accession into the customs union if elected. If this happens, Ukraine would be forced to raise tariffs and would likely increase its imports from Russia, which would enhance Russia’s economic influence in Ukraine considerably.

The question is whether or not the European Union will let Ukraine—an important link in the transit of energy from Russia to Europe—fall completely into Russia’s hands. The Trumpet has previously noted that Germany likely cut a deal, possibly over influence in Ukraine, during Russia’s invasion of Georgia, and has also speculated that it could go as far as splitting Ukraine between the two powers.

Even without a deal, the pro-Russian faction in Ukraine must be eager to press its advantage after America showed its unreliability as an ally to Eastern European nations by reneging on its agreement to deploy a ballistic missile defense system in Poland and the Czech Republic. Any hope of the Orange Revolution permanently taking Ukraine completely out of Russia’s sphere of influence is just a fantasy. Now it looks like the pro-Russian political faction is set to take back the government.

While we are yet to see what exactly will happen in Ukraine, Bible prophecy reveals that an alliance of Eastern nations, led by Russia and China, will form. (For more information, request our free booklet Russia and China in Prophecy.)

The customs union Russia is creating in Eastern Europe and Central Asia is another step toward bringing Eastern nations into a stronger alliance that will confront the EU. Russia plainly seeks to lead a political integration of its former Soviet satellites.

It took Europe over 50 years to accomplish such a union. It will be interesting to see how far Russia can take its new customs union into the political sphere, but the direction Russia is taking eurasec and the cis is the same as the EU has taken.

While the Bible prophesies a military alliance among Eastern nations, this doesn’t necessarily mean a strong economic link between Russia and China will form. Nevertheless, the new customs union will give Russia new terms on which to deal with China, thanks to Kazakhstan. China just recently became Kazakhstan’s largest trading partner, and Kazakhstan has received $15 billion from China in financial aid. Kazakhstan has had to balance its export of oil resources between China and Russia; amid the global recession, China was able to tip the scales in its favor.

China lent Kazakhstan $10 billion in April to lock in future oil supplies and pay for a stake in mmg, Kazakhstan’s fifth-biggest oil producer. An oil pipeline from Kazakhstan to China built in 2006 was expanded to transport up to 400,000 barrels of oil a day to China—one fifth of Kazakhstan’s exports.

Chinese President Hu Jintao visited Kazakhstan in December to celebrate the opening of a gas pipeline that will send natural gas into Asia; there he offered an additional $5 billion for oil refining, nuclear power and other projects.

The growing relationship between Kazakhstan and China is being interpreted as a potential wedge in Kazakhstan’s relationship with Russia. However, Kazakhstan will likely prove to instead be an important bridge between Russia and China that will eventually help bring forth the prophesied Eastern alliance.

Jan. 1, 2010, ushers in a new decade of supranational alliances. It has started with Europe and the movement is destined to spread east to Asia.