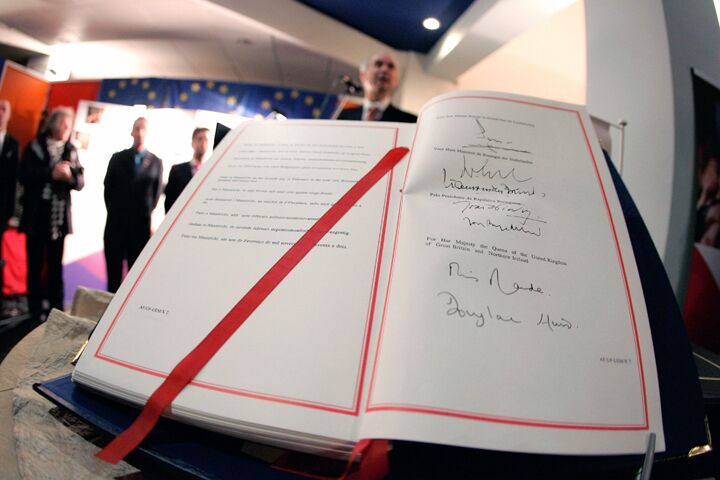 In the unification of Europe, nothing really appears on the surface as it actually is.

MAASTRICHT—Driving into the European border town of Maastricht, one is struck by how unimpressive is the approach to the place that gave its name to the treaty that finally revealed the true nature of the postwar European project.

A simple sign with just the name of the town, gracing the side of a two-lane road lined with small cottages behind which lies a rural countryside, is all the evidence that one has of entering the town that became headline news back in February 1992.

Yet, Maastricht symbolizes the event when the European combine finally showed to the world its true nature. It was at Maastricht that the treaty was signed which revealed that the entity long deceitfully touted as a simple trading community—a common market growing out of the European Coal and Steel Community, established by the Treaty of Paris in 1951—was in fact destined all along to become a political power in its own right.

Since the signing of the Maastricht Treaty, subsequent treaties have quickly built the European Union into its present status as a huge 27-nation federalizing, corporatist state that is now the richest trading entity in the world, and stands on the brink of becoming the largest single global political power. In the process, it has disenfranchised 26 nations from their unique national sovereignty. Only Germany has managed to extricate itself from any yielding of its national sovereignty to the EU monolith of, significantly, its own creation, due to a recent hasty legal change resulting from a ruling by its constitutional court.

Following the treaties of Amsterdam and Nice, the EU now awaits ratification of its constitution, under the guise of the latest “treaty,” the Lisbon Treaty. All that stands in the way of empowering this great state with its own president, minister of foreign relations and unique diplomatic corps is the Irish referendum on the Lisbon Treaty/EU constitution due to take place on October 1.

By October 2, it is entirely feasible that the vision Catholic-German elites have held since the 19th century of a revival of the “Holy” Roman Reich of the German Nation could be all but a fait accompli in political form.

However, to fully realize that vision, the political entity would require two more achievements: a military force worthy of its financial, economic and political clout, and a binding ideology to cement its 27 fractious nations together in some semblance of a unified imperial spirit.

Present appearances belie that either of these is in immediate prospect of being fulfilled. But, appearances can be deceiving. In 60 years of postwar uniting-Europe history, nothing has really appeared on surface evaluation as it actually has been. This has been the great deceit perpetrated by those who have pursued the “holy” Reich vision since their last grand failure to establish a 1,000-year global rule via World War ii.

In their preparation to continue the effort of global conquest following the World War i armistice, German military and industrial elites, together with Europe’s Roman Catholic central bankers, secretly connived to support the next war effort. That all culminated in the rise of Hitler and the Nazi Party as the political force activating the populace in supporting the Third Reich dream. Many archived documents have been released in recent times that offer unerring proof of this fact. The Trumpet has quoted and referred to a number as we have followed the course of the rise of the Fourth Reich.

Akin to 1939, the German-inspired European Union now has in place the industrial might, the continental infrastructure—and is currently in process of enacting the global financial regulation—that will underpin its imperialist foreign policy.

Militarily, in addition to the 2 million military personnel that the EU currently boasts, it has one additional string to its armed defenses bow—the resurrected German High Command in 21st-century clothes. In fact, Germany has at its disposal far more power under the EU umbrella than the Third Reich ever possessed, and it has all been achieved without firing a single shot in anger!

Given German organizational thoroughness and a blitzkrieg mentality responding to any future demagogue, a united Europe under German domination would be a far, far greater power than that which the world witnessed 70 years ago.

But what about a binding ideology—some driving force that would electrify the national spirit of a people that have lived the good life for so long, and grown soft, in the wake of the German postwar economic miracle? Could Nazism be revived?

In Germany, generally speaking, the extremists on the Nazi fringe are looked upon as just that. Often they are held up as a laughing stock. The Nazi ideology, it seems, is dead in Germany, except for a few diehards and groups of skinheads that struggle to keep its sputtering embers alive. Indeed, the generation that once worshipped at the Nazi altar has almost died out. Hitler has become the nation’s scapegoat to atone for the sins of the Third Reich. Germany now sports a smile of relief at the sins of the past having been atoned for and even apologized for by its current chancellor.

So, is there a particular ideology that would kindle anew the national spirit in Germany and stimulate the nation to rise to conquer once again?

Well, yes there is, and today it is vested in the hands of a very German, Bavarian pope, a pope who has been extremely busy creating a benign public image. This image belies the reports that occasionally emerge from within the walls of Vatican City indicating that much activity is going on behind the scenes to ensure that the most powerful positions of influence and authority within the great corporatist state of the European Union are taken by dedicated Roman Catholics.

Should the Irish referendum yield a yes vote for the Lisbon Treaty, the only two countries then holding out would be the Czech Republic and Poland. Given the nature of their dependence on the largesse of the major EU nations for continuing support of their separate economies, and, in particular, the high level of investment in each by Germany, these two countries could simply be politically and economically bludgeoned into submission. And, one must remember, they are both Catholic countries, whose electorates will yield to papal direction.

Militarily, given a change in the status of nato forced by an isolationist mentality in Washington, the EU could become a military power virtually overnight. The thing to watch for now is the trigger that will inspire the Catholic nations of the EU to unite under the ideological rule of Rome.

Continue to watch for a crisis that will drive Europe back to that which this present pope and his predecessor have called its “Christian roots.” The feeling in Germany in the wake of what is to many a disappointing turnout of the electorate for both the earlier EU parliamentary elections and the recent German election, is that Europe is ripe for a sweeping ideological change.

As has so often been the case in European history, watch for that change to rumble forth from Rome!