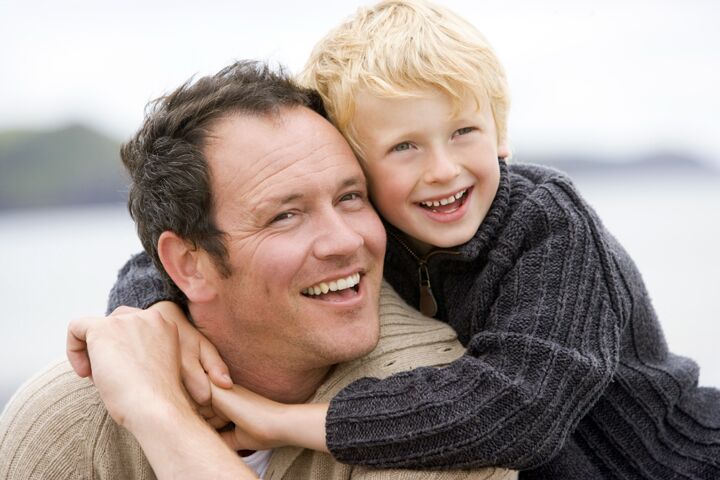 Family is the most beautiful thing in life!

Herbert W. Armstrong once wrote, “The very foundation of any stable civilization is a solid family structure. … Nothing in this material world is as important as a happy home life with father, mother and well-taught, happy children—a close-knit family” (Good News, February 1979).

So often, you see that great men and women come from strong families. They had the support of a dedicated father and mother in a happy marriage.

Theodore Roosevelt attributed a great part of his success and leadership to what he learned from his father. “My father was the best man I ever knew,” he said. Wayne Gretzky, perhaps the greatest hockey player ever, had a terrific relationship with his father. So did the famous runner Sebastian Coe. Football greats Dan Marino and Joe Montana said their fathers taught them how to be leaders. I find such examples inspiring.

David Hartman was a common-looking man, not your typical handsome television personality. But he became very successful in that field, hosting the top-rated program Good Morning America for over a decade. He too had a strong relationship with his father. “My father always told me, David, you’re unique!” he said. “And you have something unique to give!” He believed his father and achieved a lot in his life.

The best family example in history, however, is that of Jesus Christ.

The Apostle John, in writing his Gospel, showed how Jesus repeatedly and consistently honored His Father. John wrote, “No man hath seen God at any time; the only begotten Son, which is in the bosom of the Father, he hath declared him” (John 1:18). Notice what that verse says!

Jesus Christ was the only being ever begotten by God as a human being in the womb of a woman. This shows a special family relationship. There was the Father and the Son in the God Family!

The truth is, from the very beginning, God created physical family in order to teach people about Himself, and to draw people to Himself! God created marriage between husband and wife, and sex as a means of reproduction, so that children would grow up in a family. All of these physical realities point to spiritual truths! The physical family is an exact type of the God Family! You can read an inspiring and very complete scriptural explanation of these truths in Herbert W. Armstrong’s book The Missing Dimension in Sex. We would be happy to send you a copy for free.

John 1:18 also says Jesus was “in the bosom of the Father,” which means He had a wonderfully intimate, loving relationship with His Father. He loved, honored and respected His Father. He repeatedly gave His Father credit for His success.

Then, this verse tells us that Christ actually devoted His earthly ministry to declaring His Father! Jesus Christ revealed the existence of God the Father to this world. Before that time, people didn’t even know God in the terms of family.

Let me tell you an awe-inspiring, marvelous truth that you can prove from your Bible. It is very beautiful, and so plain that I wonder how so many people—even those who profess to believe the Bible—can fail so completely to understand it!

This is astonishing! Why did He keep repeating these statements? There is an inspiring reason!

Christ was the Son of God, who had shared in the majestic glory of God for a prior eternity. But He came to Earth to declare His Father. Over and over, He said, My Father sent me. Don’t make your religion revolve around me. I’m not the central figure! The Father sent me! He’s in charge! He’s the Head of the Family!

Never in the history of the universe has anybody honored his father more than Christ honored His. What wonderful humility and character He had in declaring His Father, and constantly directing our attention to the Father!

God the Father sets the ultimate example in fulfilling that role! And He inspired tremendous love and devotion in His Son, Jesus Christ.

This example shows how strong family is meant to work! God wants physical fathers to fulfill the same function that He Himself fulfills toward His children. Such a father can lead his whole family to be strong and stable. This gives those children tremendous advantages in life. They know love. They have a strong foundation for stable relationships. They have gained proper confidence, learned the value of self-discipline and hard work, and received countless other invaluable lessons. And most of all, they grow up much better prepared to have a strong relationship with God the Father.

But what do most Christians today believe? Why, they think that everything revolves around Jesus!

Read those scriptures again. Do you realize that Christ specifically and repeatedly told us not to do that? When we overlook the Father, we insult both Christ and the Father! That is rebelling against God!

We must learn to honor the father! That is true in our homes and families, and in our spiritual lives.

Christ continued, “If God were your Father, ye would love me: for I proceeded forth and came from God; neither came I of myself, but he sent me” (verse 42). Again, He continually honored and declared the Father. Then He said plainly, “Ye are of your father the devil, and the lusts of your father ye will do” (verse 44).

The religious people of Christ’s day didn’t honor God the Father. After all, they killed His Son! They obeyed their father, the devil. And Satan hates family. He is determined to fight it with everything he has!

The same is true of so many people today—including religious people. Satan has deceived the whole world (Revelation 12:9). He wants to blot out the Father and destroy the Family of God. Most people fail utterly to understand family.

Did you know that family is at the heart of the gospel that Jesus Christ preached? How many religious people understand that? (Request a free copy of The Incredible Human Potential to understand this truth.)

Satan is the god of this world (2 Corinthians 4:4). His society is filled with attacks against God’s plan for family. These attacks are succeeding in some frightening ways. The institution of the family is suffering the death of a thousand wounds.

God says that when you find a wife, you find a good thing and have God’s favor (Proverbs 18:22). That is inspiring! Don’t those politicians realize that—when they betray their wives and have shameful love affairs? Don’t they realize what a good thing they have, and that they are trashing it?

Forty years ago, Time magazine warned that the crisis in the family has implications that extend far beyond the walls of the home. In a Dec. 28, 1970, article, Time quoted the founder of the American Institute of Family Relations as saying, “No society has ever survived after its family life deteriorated” (emphasis mine).

Look around today! Wouldn’t you say that institute founder knew what he was talking about? Family breakdown is having disastrous effects—and they are going to get far worse.

Remember what Mr. Armstrong wrote: “The very foundation of any stable civilization is the solid family structure. …Nothing in this material world is as important as a happy home life with father, mother and well-taught happy children—a close-knit family.”

The fact that the physical family is an exact type of the God Family should inspire us all to forsake the filth of this world and strengthen our families!

Every father should study the example of God the Father to see how to lead his family. God says to His children, “I will never leave thee, nor forsake thee” (Hebrews 13:5). When He begets a child, He commits Himself to fulfilling His responsibility toward that child! If you study this scripture in the original Greek language, you will see it is written for maximum emphasis. There are five negatives. Though a good literal translation isn’t really possible, in essence God is saying, “I will never, never, never, never, never forsake you!” What a wonderful Father!

God honors His children. Think about when a physical father is watching his young child learn to walk. The baby is bound to stumble and fall. The father doesn’t focus on the stumbles. He looks at when the child takes a step! As soon as the child steps, that really excites him! The same is true of God the Father. He is moved and stirred when He sees His children take spiritual steps, and begin to walk and live and act like Him! That kindles within Him strong feelings of love.

In 1 Corinthians 10:13, He tells His people that He will never allow them to suffer a trial greater than they can bear. Yes, He does allow trials at times. He does chasten and correct His children (e.g. Deuteronomy 8:5; Hebrews 12:5-11). But He knows His children so intimately that He knows exactly where to draw the line in a trial that will develop their character! That is a promise that reveals His great depth of understanding about you and love for all His children.

The parable of the prodigal son, recorded in Luke 15, also shows that love. The son rebelled against his father and fled to the world. He soon realized that his life had become a wreck. He recognized just how good he had lived under his father. He decided to turn things around, and he returned to his father in a repentant state. How did the father in this parable respond? Exactly the way God the Father responds when one of His children repents: He hugged and kissed his son! He was full of joy! He truly celebrated his son’s return.

Yes, God is a loving Father. He’s not like a father—He is the ultimate Father! And He’s perfect. He said, If you, being evil, know how to give good gifts to your children, how much more do I, in whom there is no evil? (Matthew 7:11).

God gave His own Son to pay for our sins so that, when we repent and accept that sacrifice, God can open up His Family to us!

He gives us incredible honor. We all must learn to honor Him back, as Jesus Christ did. As Christ told us in Matthew 18:1-4, in order to enter God’s Kingdom we must humble ourselves as little children. That means seeing God, and honoring Him, as our Father!