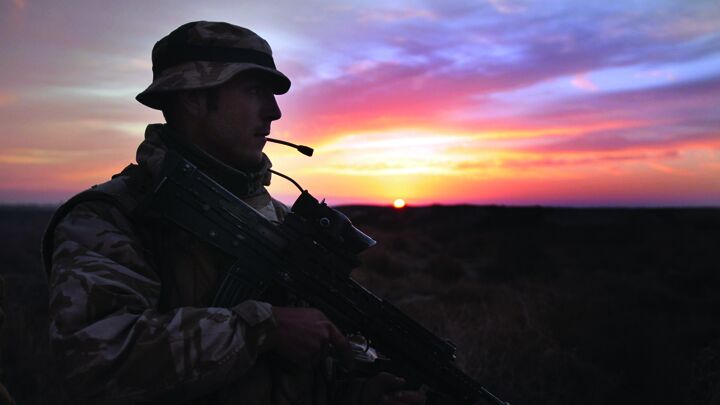 A recent decision by a British court will have Britain’s enemies all over the planet in stitches of laughter. In May, the court upheld a case brought against the Ministry of Defense by the parents of a British soldier who died of heatstroke on the battlefield.

Thus, the nation once renowned for the code of honor within its regimental tradition and the lion-like bravery of its fighting forces in battle is reduced to the image of a silly dove (Hosea 7:11).

One has to wonder if such a judicial attitude had prevailed during World War ii—in which British soldiery often entered battle grossly underequipped—whether the rule of the tyrant who could have overwhelmed Britain would have produced results any worse than the present tyranny of the feminist, homophile, politically correct thinking that dominates the British judiciary.

Would Winston Churchill—who promised “blood, toil, tears and sweat” to the British public in their battle for survival against overwhelming odds—have been brought to book for crimes against the human rights of every British subject, let alone the nation’s fighting men?

Had the parents of just one airman who fought in the Battle of Britain—who was deprived of adequate rest and the basic comforts of life, often in freezing conditions, fighting to save his nation from the Nazi aggressor while squeezed into the tiny cockpit of his Spitfire—even considered bringing such a charge against the Ministry of Defense back then, they would have been laughed to scorn and called traitors to boot!

And what of World War i, and the “human rights” of those who fought in the mud, slime and gore of the trenches in Europe and across the fazing heat of the desert sands in northern Africa? How many died from not only heatstroke, but just sheer exhaustion from the combined effects of dehydration, sleep deprivation, and inadequate food and shelter?

Then there was Gallipoli, where the Anzac troops were landed on the wrong beach, facing withering fire from the entrenched Turks pouring down on them from the craggy cliff battlements above. Ion Idriess wrote of the scene in the aftermath of that carnage: “The beach is strewn with discarded equipment, broken rifles, numerous mess tins and water bottles, all with shrapnel holes through them, lengths of barbed wire, jagged stakes, torn haversacks, and now and again the trampled-on felt hat with the little hole and black blood patch. These are the relics of the landing of the first battalions and each tragic bit of flotsam tells its own story” (The Desert Campaign).

Elsewhere, Idriess spoke of the infestations of body lice and maggots as big as caterpillars infesting the trenches filled with the mixed mire of mud, blood and the stench of rotting flesh. Yet not one parent brought a case against the home government for breach of any soldier son’s human rights during the Great War. They all regarded those sons as heroes for having fought, suffered and too often died in the service of king and country.

Oh! How far the British lion has descended down the slippery slope of moral equivalence to the point where a court of the land can charge its own nation with breach of human rights for the death of a soldier due to heatstroke! And what a can of worms this inane judicial finding is going to open up within Britain’s politically correct society! Now Britain faces the prospect of any soldier—or of his parents—claiming breach of human rights for that which historically has been the expected sacrifice of members of its fighting force in battle.

War historian John Keegan has observed, after a career studying war and fighting men, that “Soldiers are not as other men …. [T]he culture of the warrior can never be that of civilization itself. All civilizations owe their origins to the warrior; their cultures nurture the warriors who defend them” (A History of War). The warrior tradition has always involved self-sacrifice in the defense of bride, family, clan, tribe or nation. Thus the soldier operates in a culture outside of the norms of traditional society, often under conditions that the codes of law that govern the civilian are simply not designed to address.

When operating as a civilian, the soldier out of uniform is bound by the civil law of society. When operating as a soldier in defense of his country, different rules have historically applied on the battlefront. This latest decision by a British civil court crosses the traditional bounds that separate civilian and battlefront conditions. It breaks the tradition that “cultures nurture the warriors who defend them.” In fact, it denigrates the whole warrior culture by treating the soldier as but an ordinary civilian. Such a ludicrous legal decision can only further hurt morale in an already dispirited British fighting force.

Full well the prophecies of your Bible leap into stark, current-day perspective. Such decisions indicate the fulfillment of Isaiah’s prophecy for the Anglo-Saxons in the very times we are living through today: “For, behold, the Lord, the Lord of hosts, doth take away … The mighty man, and the man of war, the judge … The captain of fifty, and the honourable man …” (Isaiah 3:1-3).

In this civilization of man, when a nation ceases to “nurture the warriors who defend” it, there can be but one ultimate outcome. Even as Ezekiel declared, envisioning conditions extant in our day, the time is fast approaching when, as the call to battle is sounded, with the enemy pounding on the door, they will have “blown the trumpet, even to make all ready; but none goeth to the battle: for my wrath is upon all the multitude thereof” (Ezekiel 7:14).

For a deeper understanding of why Anglo-Saxon society is descending so speedily into weakness and increasing dominance by other world powers, request The United States and Britain in Prophecy and Hosea—Reaping the Whirlwind.