The tanking economy is exposing our lack of strong character. 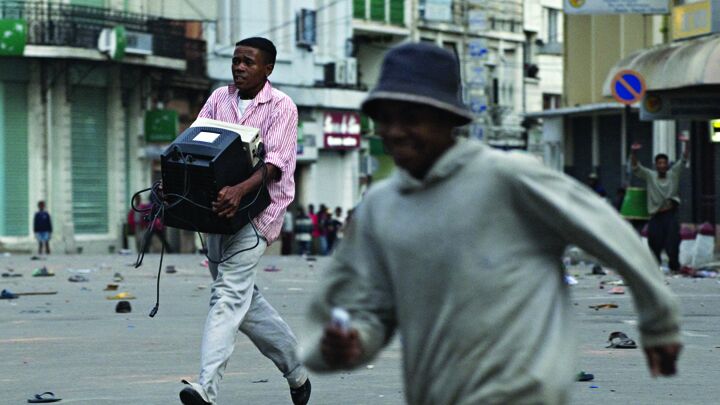 The tanking economy is exposing our lack of strong character.

Being the window-smasher takes guts. Few people have the nerve to break into an empty shop. But far more will burglarize a store that has already been breached.

Don’t believe me? Remember New Orleans. After Hurricane Katrina broke the levees, thousands remained stranded without electricity or communication, enclosed by rising toxic waters. With police preoccupied with search and rescue, the first window broke. Soon the city was crawling with deputy criminals. They ransacked evacuated shops and brazenly roamed the streets lugging boxes, trash bags and shopping carts packed with stolen goods; they armed themselves with knives and guns from weapons dealers and pawn shops.

Many of these people under normal circumstances wouldn’t think to do such things, but desperation drew them toward depravity. They watched others do it—they felt abandoned by the government—they became intoxicated with bitterness and a sense of entitlement—and they convinced themselves there was nothing wrong with their criminality. Thus, the city plunged into lawlessness. Within two short days, thugs and gangs held siege. Arsonists arbitrarily set buildings ablaze; snipers fired at military helicopters; crooks assaulted trucks trying to reach survivors with provisions. The chaos was so violent that beleaguered national guardsmen were given shoot-to-kill orders—against ungovernable American citizens.

Here’s the take-home lesson. Trials reveal people’s hearts. They show us what we are made of.

This fact is eminently worth contemplating as we witness this global economic hurricane. Fiscal irresponsibility is causing business failures, which is hammering jobs, which is decimating consumer spending, which is motivating bureaucratic recklessness, which is ravaging currency values. All of this is stirring social unrest and, in some cases, actually toppling governments (witness Iceland and Latvia).

What will this sequence of trials reveal about us? Early indicators are worrying.

Britain’s crime rates are surging, and the government blames the economy. There, police are bracing for a “summer of rage” as those losing jobs, homes and savings take to the streets in potentially violent protests. Known activists are preparing—all they need are malcontent “foot soldiers” to stir havoc.

Again, the concern is not about individuals just waiting for a chance to commit crimes. It is that it only takes a few who are willing to break the glass. Just look at Latvia, where, in January, 10,000 peaceful demonstrators turned into a violent mob, throwing cobblestones from the streets through the windows of shops, offices, even the Finance Ministry, and then looting. Such demonstrations are flaring up all over Europe.

Expect similar fireworks in cities across America. Gerald Celente, who tracks global trends for corporate clients as head of the Trends Research Institute, says the next three years in America will see job marches, food riots, widespread tax rebellion and massive social disruption. As much as we might want to ignore him, Mr. Celente successfully forecasted the 1987 stock market crash, the 1991 fall of the Soviet Union, 1997’s Asian currency collapse, the subprime mortgage debacle, and last year’s failure of several Wall Street giants. And he predicts that because people today have so much to lose, conditions will get worse than those of the Great Depression. “You’re going to see crime levels in America that are going to rival the Third World. Welcome Mexico City,” he told Russia Today. “You’re going to start seeing people being kidnapped in this country like they do in other underdeveloped nations. So it’s going to be very violent in America” (February 11).

Since Jesus Christ Himself told us that trouble in the end time would escalate into horrors worse than any in human history (read Matthew 24:21-22), it is difficult to ignore such a warning.

When severe trials hit, such as those now developing, only two things can prevent civilization from giving way to the law of the jungle. One is strong individual character. The other is strong, authoritative government.

Talking to those who personally endured the Depression makes clear that society survived then because of the first of these. People sacrificed. Families tightened. Neighbors helped one another.

This time around, Americans are tending toward the second option, hoping that reckless federal spending of non-existent money will prevent Great Depression ii. The public disillusionment and social disruption when these plans fail will be a tragic spectacle.

Certainly there are many whose character will hold up in the face of depressed conditions today, at least initially. But there are also plenty of others whose character deficit will prevent them from enduring. They are really just a broken window away from joining the criminal set.