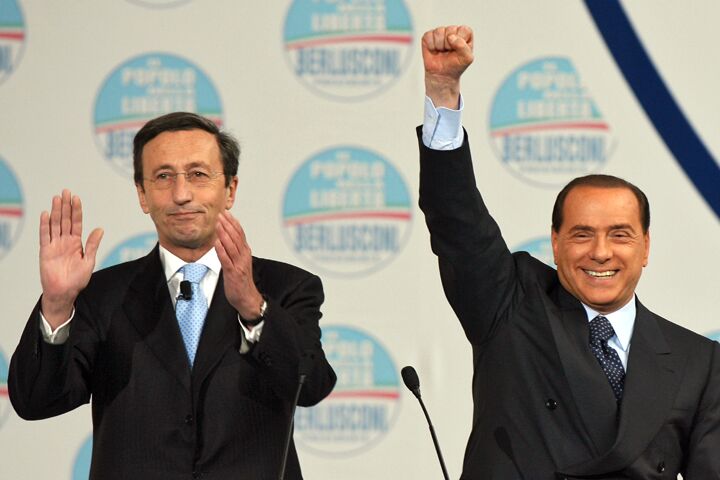 Seventy years after fascist Italy formally allied with Nazi Germany, the government in Rome is again being filled by those who sympathize with Benito Mussolini.

The lights are beginning to go out all over Europe. In Austria, nearly one third of voters supported pro-Nazi parties during federal elections last year. In Italy, a party founded by the political heirs of Benito Mussolini merged with the conservative party of Prime Minister Silvio Berlusconi earlier this week. These shocking developments are causing many to fear a fascist resurgence across Europe.

Last September, Italian defense minister and National Alliance member Ignazio la Russa paid homage to Italian troops who fought alongside the Germans against the Allies during the Second World War.

Another National Alliance member, Gianni Alemanno, was greeted with fascist salutes when he was elected last April as Rome’s first right-wing mayor in over 60 years.

Even Berlusconi himself said in an interview published in the Spectator on Sept. 13, 2003, that “Mussolini never killed anyone. Mussolini sent people on holiday to confine them [to small islands].” He failed to mention that Mussolini also sent Italian Jews to Hitler’s concentration camps.

These are not a few leaders from a right-wing fringe party. These are leaders who are shaping national policy from key positions in Italy’s current governing coalition. The government in Rome is again being filled by those who sympathize with Benito Mussolini.

The consequences of this are already being seen.

Prime Minister Berlusconi controls 90 percent of Italian free-to-air television and has used the media to his advantage by dominating air time during elections and silencing the voices of his harshest critics. Berlusconi has passed legislation that bans criminal investigations on the president, the prime minister and the speakers of the Senate and lower house. More than 3,000 troops now patrol the streets in Italy’s biggest cities—including Rome, Naples, Milan, Bari, Palermo and Venice—as part of a massive government clampdown on crime.

Not since the end of World War ii have pro-fascist elements had more impact on the Italian political scene. In the words of Christopher Duggan, the British author of Force of Destiny, an acclaimed history of modern Italy, “The fusion of the parties signifies the absorption of the ideas of the post-fascists into Berlusconi’s party ….”

Failure to Break With the Past

Especially key to understanding Italy’s current shift toward pro-fascist policies is the astounding fact that the Allies did not even attempt to implement a process similar to denazification in Italy after World War ii. Duggan describes this lack in his above-cited work:

There was never a clear public watershed between the experience of fascism and what happened afterwards. It’s partly the fault of the Allies, who after the war were much more concerned with preventing the Communists from coming to power.As a result very senior figures in the army, the police and the judiciary remained unpurged. Take the figure of Gaetano Azzariti, one of the first presidents, post-war, of Italy’s Constitutional Court, yet under Mussolini he had been the president of the court which had the job of enforcing the race laws. The failure of the Allies to put pressure on Italy also reflects a perception that still exists: that the fascist revival is not to be taken seriously because Italy is “lightweight.” Whereas if the same thing happened in Germany or Austria, you’d get really worried.

Even though the National Fascist Party was outlawed in Italy’s post-war constitution, the supporters of Mussolini quickly re-banded after his death and founded the Italian Social Movement. This movement became the post-fascist National Alliance political party in 1994. Now this movement has been accepted as a part of Italy’s current governing party. What does such a development forebode for the future of Italy—and Europe?

The Future of Europe

Problems such as economic hardship, illegal immigration and Islamic terrorism are driving more and more Italians to extreme-right-wing politics. Yet this trend does not stop in Italy.

It has already been mentioned that nearly 30 percent of Austrian voters backed pro-Nazi parties in the last federal election. Additionally, “In Norway, the anti-immigrant Progress Party is now the largest in the land,” wrote the Independent. “Like other right-wing parties in Scandinavia, it has enjoyed surging support since the Islamic cartoon affair two years ago. In Switzerland, Christoph Blocher’s Swiss People’s Party won the general election last year after a campaign condemned as racist by UN monitors. In Poland, the League of Polish Families, a member of the coalition government until a year ago, campaigns for the elimination of Jewish influence in business and the professions. The Vlaams Belang in Belgium is strongly anti-immigrant. Even in ultra-liberal Denmark, the nationalist and anti-immigrant Danish People’s Party is now the third-largest party” (Sept. 26, 2008).

In Germany, neo-Nazi parties like the National Democratic Party are moving closer to the political mainstream. Even major centrist political parties like the Christian Democratic Union and the Social Democratic Party are taking on more right-wing views in the face of surging illegal immigration and the global economic crisis. This shift to right-wing conservatism is acting as a unifying force in the European Union as nations across the Continent begin to take a common view on how to solve their problems. This also sets the scene for a single European nation to rise up as the absolute leader of a united continent.

The greatest danger to Europe is not the neo-Nazi thug who shouts and jeers at a soccer tournament. It is the well-dressed, right-wing extremist politician who sits in a position of power. The racist political activists of yesterday have become the respectable technocrats and politicians of today.

Biblical passages such as Revelation 17:12-13 show that in the end time, 10 dictatorships are to rise up and give all their military power to an overarching emperor who will resurrect the Holy Roman Empire. The late Plain Truth editor in chief Herbert W. Armstrong proclaimed for over 50 years that these 10 dictatorships would rise up in Europe and merge into a fascist empire dominated by Germany.

In both Austria and Italy, pro-fascist parties already control a substantial number of parliamentary seats in their respective national legislatures. The world needs to take heed of these disturbing developments. They foreshadow both the worst and the best news anyone could ever hear. For more, request our free booklet Germany and the Holy Roman Empire.