Will Israel realize it? 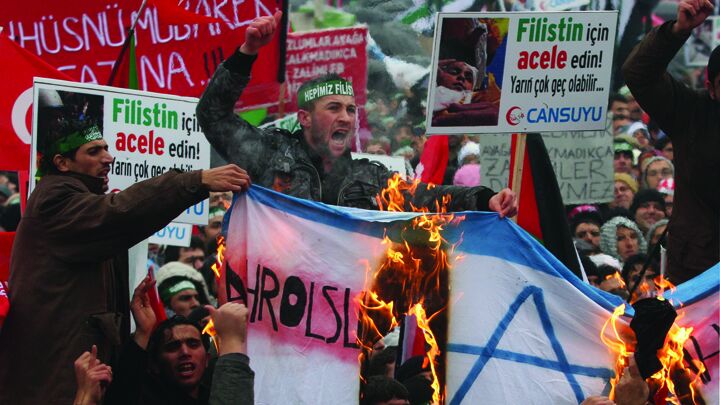 Will Israel realize it?

Among the many truths the war in Gaza exposed, here is one: Israel’s alliance with Turkey is a trap.

Israel inked a mutual defense agreement with Turkey in 1996. Among its benefits, the deal linked the two countries’ militaries in joint training, provided Israeli arms to Turkey ($2 billion worth as of 2007) and granted Israel’s air force overflight privileges.

Far more, the deal gave Israel a much-needed, highly respected ally in a neighborhood full of enemies. Those itching to pick a fight with Israel simply haven’t been eager to contend with Turkey’s million-man army, the second-largest force in nato after the United States. The Islamic Affairs Analyst went so far as to say that Israel’s foes—most notably Iran—respected Turkey enough that the Jewish state’s survival was all but assured as long as the pact held up.

But there’s the rub. Just a glance at events in the past couple of years shows that this deterrent effect has weakened. Israel’s enemies have started to turn loose.

Not coincidentally, over that same period, Turkey has shifted from being a hedge against those enemies to actually supporting them. Nothing made this clearer than did the Gaza conflict.

This is a grave loss for Israel. It is also a clarion warning about what to expect from Turkey in the future, if only the Jews would heed it.

“We Will Kill You”

Thus read a notice scrawled on one of the largest synagogues in the Turkish city of Izmir. Public graffiti screamed messages like “Kill Jews” and “Israel should no longer exist in the Middle East.” Large, angry protests filled the streets of cities across the country, including a rally of 200,000 in Istanbul square.

As Israeli forces pounded Gaza, this is how the people of Turkey responded.

“There haven’t been such widespread and spontaneous anti-Israel sentiments before,” wrote columnist Sami Kohen of the Turkish daily Milliyet. “It’s not just the Islamic circles. It’s also the secularists and the nationalists. The protests have been representative of the whole of Turkish society. I don’t remember seeing such a public reaction on any other issue before.”

After years of walking the line in allying with the West, Turkey is increasingly embracing its Muslim identity. An early sign of just how much came in 2006, when Hamas won the Palestinian elections. Where most of the world turned its back on the terrorist group, Turkey not only recognized it as a legitimate government, it also accepted a Hamas delegation in Ankara led by the group’s leader in exile, Khaled Mashaal. Since then, Turkey has elected a former Islamist as its president, become one of the few Mideast governments to recognize Hamas’s administration in the Gaza Strip, been an almost lone voice protesting Israel’s attack on a Syrian nuclear facility, and established political and economic ties with Tehran.

Remarkably, none of this alarming behavior raised much concern within the Israeli government. When Prime Minister Ehud Olmert decided he wanted to secretly pursue a peace deal with Syria last year, he used Turkey as the mediator, as if Turkey’s respect for Israel’s interests had remained just as it was in 1996.

Olmert’s blind pursuit of a peace pact with an avowed enemy of Israel—Syria—drawing on the help of a country that is supporting and cooperating with more avowed enemies—Hamas and Iran—is deeply revealing, and prophetically relevant. This tendency to invest faith in sources that warrant no faith is a grievous wound in Israel’s national character. As devastating as it has been for Israel to this point, it will yet prove to be far more so.

Despite Turkey supposedly being the Jews’ strongest ally in the region, its reaction to Israel’s counterattack on Hamas—not just in the street but also by the government—was on par with Iran’s.

“What Israel has done is nothing but atrocity,” President Abdullah Gül said. “Allah will sooner or later punish those who transgress the rights of innocents,” said Prime Minister Recep Tayyip Erdoğan. Of Olmert, with whom he had been working on the Syria peace deal, Erdoğan said, “He betrayed me and harmed the honor of Turkey.” And to Olmert and Foreign Minister Tzipi Livni, he said, “History will judge you with what you have done as having painted a black stain on the history of humanity.”

In Ankara’s view, Israel bore all the blame for the Gaza war. “Hamas abided by the truce. But Israel failed to lift embargoes,” Erdoğan said—a ridiculous lie. He refused to take calls from Olmert until Israel stopped the war.

Meanwhile, Turkey was more than happy to accommodate Hamas and its terrorist sponsors. The president and prime minister met with Iranian envoy Saeed Jalili amid the hostilities. Turkish and Hamas officials, including Khaled Mashaal, directly met in Damascus at least twice during the war. Having just joined the UN Security Council as a non-permanent member, Turkey pledged to be Hamas’s mouthpiece in the United Nations. It also called on the UN to impose sanctions on Israel.

This is no friend of Israel! That is the patent truth. Nevertheless, Prime Minister Olmert’s office dismissed questions about whether the Turkish-Israeli alliance is fracturing. “Our relations won’t be hurt,” his staff said, “they will remain strategic.” They explained that the leaders were simply posturing for the people in order to position themselves for coming elections.

Even if that laughable assumption were true, shouldn’t the fact that the Turks hate Israel so deeply that their leaders must denounce the Jews in order to retain popular legitimacy be of supreme concern to Israel regarding the value of this alliance?

This tendency within Israel to brush aside such ugly reality contains the seeds of the death of the state!

Israel’s ambassador to Turkey, Gaby Levy, requested an urgent meeting with Prime Minister Erdoğan during the conflict. He was rebuffed—told that a meeting was impossible as long as attacks on Gaza continued. So what did Israel do? Ehud Olmert asked German Chancellor Angela Merkel and Middle East envoy Tony Blair to mediate between Israel and Turkey!

That’s right: Israel asked Germany for help to try to preserve an alliance with a country actively working with Israel’s enemies against Israel’s interests.

The problem with Turkey is not simply a matter of Turkish leaders needing to appear to snub Israel in order to appease their people. The problem is far deeper and is ignored at Israel’s peril.

It would also realize it about Germany.

Biblical prophecy reveals the inevitable outcomes of these relationships.

It shows that a Muslim-Jewish war is about to erupt—initiated by Islamic forces clearly unrestrained by Turkey or anything else. That conflagration will trigger a series of events leading to the Second Coming of Jesus Christ.

When the Muslims move to sack Jerusalem, it will provoke a united European bloc of nations to intervene. This bloc will set up armies around Jerusalem—appearing like a “peacekeeping force”—but quickly transforming into a deadly war machine (Luke 21:20). It won’t be just Arabs or Muslims that suffer at their hands; this European power will turn its full force on the nations of Israel—including America and Britain. This horrifying double-cross is discussed in Ezekiel 23 (and also in our free booklet Jerusalem in Prophecy). Many in the Jerusalem area will be trapped!

The Prophet Obadiah recorded an extraordinary prophecy about “Edom,” whose modern descendants are the Turks. (Request a free copy of the Trumpet’s December 1997 article “Turkey: An Act of Revenge!” for a detailed explanation of this prophecy.) It shows how Turkey, possessing the escape route via land—the Cilician Gates mountain pass—will actually sell out those Israelis, as well as Americans and British, who are trying to escape, delivering them into the hands of their conquerors.

This prophecy, foretelling the betrayal of Israel first by a German-led European force and then by Turkey, is not at all difficult to foresee considering the problematic nature of these relationships today. But Israel—credulous, vulnerable, trusting and blind to the very end—will be absolutely shocked by these monstrous betrayals, simply because it refuses to heed the warning God has supplied within these unbreakable prophecies!

For those attuned to the prophetic truth, however, the unfolding of these events will come as no shock. It will only strengthen their faith in the God of the Bible. And it will increase their anticipation for what is prophesied to occur soon after those nightmares: the dawn of a just and peaceful civilization, the wonderful World Tomorrow.