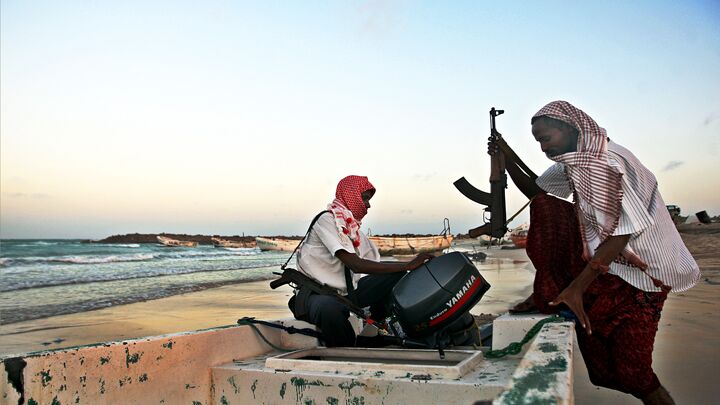 In 1785, Dey Muhammad of Algiers declared war on America’s fledgling confederation of colonies by abducting several American merchant ships in the Mediterranean and holding their crews for ransom or selling them into Moroccan slave markets.

Before the Revolution, America’s oceangoing vessels had relied solely on Great Britain’s naval and diplomatic power for protection against pirate brigades. After winning independence from Britain during the Revolution, however, American ships were left to themselves in facing the perilous dangers of traversing the sea along the Barbary Coast.

Alarmed by the hijackings and fearing it would be perceived as weak by its enemies, America’s earliest reformers argued for a more powerful central government. In “The Federalist No. 41,” for example, James Madison wrote that a stronger federal government was needed to “maintain a navy” that would “be a principal source of her security against danger from abroad.” America’s international trade and commerce, Madison wrote, “the great reservoir of its wealth, lies every moment at the mercy of events, and may almost be regarded as a hostage for ignominious compliances with the dictates of a foreign enemy, or even with the rapacious demands of pirates and barbarians” (emphasis mine throughout).

In replacing the Articles of Confederation with the United States Constitution in 1789, the founders gave the federal government the power it needed to levy taxes on its citizenry, to raise and support a national army, to provide and maintain a navy and to declare war on enemy combatants.

Even after it adopted the Constitution, many of America’s founders remained wary of a powerful centralized government—particularly one with an established naval force. But the scourge of piracy in the waters of the Mediterranean helped tip the balance in favor of naval shipbuilding. “The majority of the members of Congress, irrespective of their feelings toward federalism, could no longer bear the disgrace of kowtowing to Barbary,” Michael Oren wrote in Power, Faith and Fantasy.

So Congress authorized the construction of six frigates, and the U.S. Navy was born. Soon after, the United States of America waged its first overseas war—against pirates of the Mediterranean.

Today, more than 200 years later, the United States has the largest, most powerful navy in the world—by far. Yet last November, Somali pirates aboard speed boats embarrassed the American superpower when they hijacked a massive oil tanker bound for the U.S. through a waterway patrolled by the U.S. Fifth Fleet.

Adm. Mike Mullen, chairman of the Joint Chiefs of Staff, admitted to being “stunned” by the “extraordinary rise” in hijacking attempts. In a 12-day period in November, Somali pirates seized nine vessels passing through the Gulf of Aden. All totaled, as of mid-December 19 ships and at least 383 crew members were being held hostage by Somalia. Yet Vice Adm. William E. Gortney, who commands the Fifth Fleet, told the New York Times that there were no plans to rescue any of them.

The most powerful naval force in the world simply will not act!

Admiral Mullen complained about “legal and military obstacles” to fighting piracy. “One of the challenges that you have in piracy, clearly, is, if you are intervening and you capture pirates, is there a path to prosecute them?” Mullen said (New York Times, Nov. 19, 2008).

This is what most concerns America’s military brass—whether or not pirates can be prosecuted?

After some criticism had been leveled at the United States for not taking a lead role in defeating the pirates, Defense Department Press Secretary Geoff Morrell strenuously defended the Navy. “This notion that there’s inaction out there is just utterly false,” Morrell said at a press conference. Morrell admitted that the Navy was at least partly responsible for protecting international shipping lanes. “But the companies … also have an obligation to secure their ships to prevent incidents such that we’ve been seeing at alarming rates over the past several months,” he added, suggesting companies take additional precautions like adding armed guards.

What a comfort that must be to international shipping merchants: You’re on your own fellas! And think of the clear message America’s inaction sends to hostile powers.

In the days of Washington, Adams and Jefferson, America was concerned about being perceived as weak. Not anymore!

Regarding the oil tanker en route to America, the U.S. Navy knows where the captured ship is located. It even has permission from the United Nations to enter Somali waters in pursuit of the pirates.

But it lacks the will to act.

“We know where these guys live and where their ships and boats operate from—it’d be a simple mission to take them out,” a retired Marine general told Time. “There was talk of the U.S. military doing some kind of mission—the Navy would love to do it—but there’s no stomach for it right now” (Nov. 19, 2008).

Awesome military might—and pitifully weak willpower to go with it.

The pirates are hearing this message loud and clear. After capturing the oil tanker, they audaciously attacked an American cruise ship, one of 30 vessels they went after in a period of just two months. They know good and well America has “no stomach” to stop them. America’s top military brass no longer view aggressive action against murderous thugs as a commonsense approach to combating terrorism.

That approach, however, is now being employed by other, much less powerful nations. Take India, for example. On November 18, a pirate ship launched grenades on the Indian ship Tabar and then attempted to ram the vessel. But instead of running away from the would-be hijackers, the Indians fired back—sinking one of the pirates’ mother ships! It was the second ship the Indians sank in two weeks.

The Investor’s Business Daily noted that India’s approach “contrasts sharply with the handwringing helplessness of other navies patrolling the area under a United Nations mandate. Their mission is proving ineffective, and the enemy is growing bolder. …

“India showed that the only message with authority in this perversely incentivized void is force. The West may have bigger, more technologically advanced navies than India’s 118-ship naval flotilla, but only India has demonstrated the way to raise the cost of piracy” (Nov. 19, 2008).

The article predicted that from then on, ships flying the Indian flag would most likely pass through the Gulf of Aden without incident!

America used to have that kind of pride in its power, back when leaders were more inclined to act courageously against the forces of terror. When North African pirates, for example, demanded tribute from the U.S. government to ensure safe passage for American ships through the Mediterranean, Thomas Jefferson’s reply was unambiguous: “The style of the demand admitted but one answer. I sent a small squadron of frigates into the Mediterranean.”

And that was when the United States had a tiny fraction of the power that it has today. Like present-day India, there was much less power, but a lot more pride.

Biblical prophecy says this is exactly what would happen. There may still be plenty of power in America today, but the will to use it—as God prophesied in Leviticus 26:19—has been crushed.