How This Magazine Is About to Change 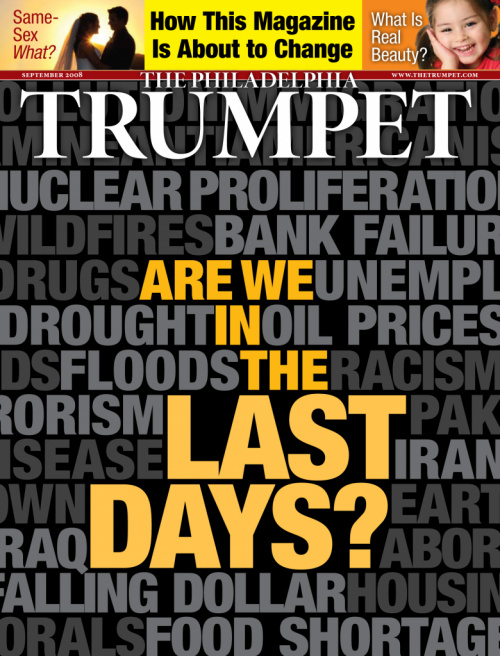 Have you noticed the dramatic increase in catastrophic events lately? This should deeply concern each one of us. Far too many are asleep—but conditions are getting bad enough that many are waking up.

The United States economy is suffering a series of distressing shocks. As I write, the papers are full of news about the failure of Fannie Mae and Freddie Mac, two corporations that cover about half of America’s $12 trillion in mortgages! The government is bailing them out—but is already so deeply indebted that it needs to be bailed out! The dollar is quickly losing value. Job losses are reaching into the hundreds of thousands. Herbert W. Armstrong often said that a global crisis could be sparked by an economic collapse in the U.S.! As these headlines keep getting worse, those words have been ringing in my ears.

Meanwhile, within the U.S. and around the world we see an acceleration in weather disasters. Right now, America’s Midwest is drowning while the West Coast is burning. Several countries are suffering record droughts and record flooding. This all puts tremendous pressure on food production and food prices, which are already very high. Pocketbooks are also being hit hard by record-high oil prices, which raise the price of everything. Millions worldwide are slipping below the poverty line.

These are only a few of the many, many significant events affecting our lives. And they aren’t going to get better as some people seem to believe. They will radically change life as we know it!

You need to understand why that is a true statement—and why these things are happening. It’s not enough to just know what is happening as it happens.

That’s why this magazine exists. The Trumpet is unlike any other newsmagazine. The world is drowning in magazines and news sources. They all fail to tell you why our world is changing! They don’t even begin to tell you where these events are leading.

That is because they categorically reject the understanding that our loving Creator God gives us through biblical prophecy. So they can only guess and feel around in darkness.

Did you know that one third of your Bible is prophecy? Why would God have taken such pains to record all that? It is because He wants you to know what is going to happen—before it happens. “I am God, and there is none like me,“ He says, “Declaring the end from the beginning, and from ancient times the things that arenot yet done, saying, My counsel shall stand …” (Isaiah 46:9-10). Almost all of that prophecy is being fulfilled now or is about to come to pass!

Prophecy is God’s warning to mankind to consider the horrifying end results of the choices we are making. It shows where our disobedience to God is leading us! (e.g. Jude 15). It is God’s effort to convince us individually to turn our lives to Him while there is yet time (e.g. Ezekiel 33:11; Zephaniah 2:1-3). So it serves a beautiful and a loving purpose.

The underlying thrust of all Bible prophecy is positive. It’s about the return of Jesus Christ. However, some very dark prophecies precede Christ’s return. Even those prophecies contain God’s hope and love, but men refuse to understand. It is only because of mankind’s rebellion that we face so many horrific prophecies. We bring these curses on ourselves—and then often blame God! This is the problem of all mankind, and that attitude is why we face those dark prophecies.

If you have been reading the magazine for a while, you have probably noticed how we say that if our nations would repent and turn to God, they could avoid those prophesied curses.

However, I believe God is directing us to change that focus.

If you study the biblical prophets, there came a point when their warnings no longer spoke about repentance. They were simply bold statements of fact—spoken as a witness against those peoples who had rejected God. I strongly believe our nations today—particularly the United States and Britain, modern descendants of the biblical nation of Israel—have passed the point of no return.The hope of their turning to God during this age has been eclipsed by the magnitude of their rebellion!

This indicates that time is indeed very short before the Second Coming of Jesus Christ. The increase in catastrophic events shows God strengtheningHis correction. Thus, I believe God simultaneously wants to strengthenand intensify the prophetic warning—in the hopes of reaching those individuals who exhibit a teachable attitude and a willingness to accept His guidance.

It is my fervent hope that you, dear reader, are one of those individuals.

I have directed our writers to begin thinking more deeply about how to reach out and supply you with the understanding you need to recognize the unparalleled urgency of these times. We want to make sure we are concentrating intensively on the most significant prophecies that are unfolding in today’s world. We want to prove to you how God told us these things would happen and just how they would end.

At the same time, we want to show you the hope—the wonderful, surehope that exists beyond this evil age! God gives us that prophetic hope to motivate us and to keep us stirred and uplifted, even amid accumulating tragedies. “And when these things begin to come to pass, then look up, and lift up your heads;for your redemption draweth nigh” (Luke 21:28).

God offers us an unparalleled future if we will only submit our lives to Him. Though the world is descending into a global holocaust, God promises to spare those individuals who repent and turn to Him. But the hope is more than just one of physical protection in the short term. Beyond that, God has a magnificent plan that involves opening up eternal salvation to every human being who has ever lived!