Pope John Paul II famously encouraged Europeans to ‘find your roots!’ They have accepted the challenge. 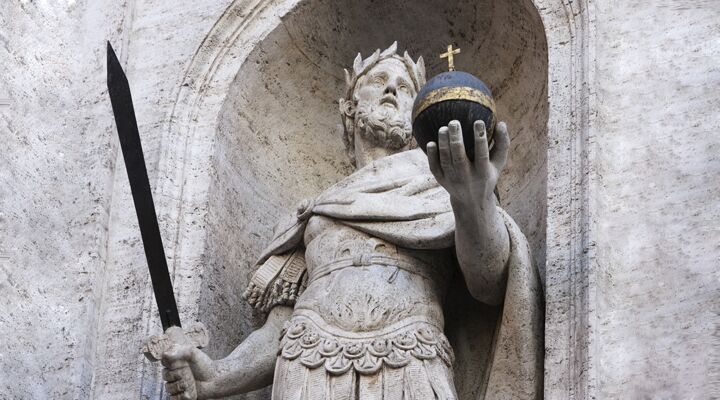 Pope John Paul II famously encouraged Europeans to ‘find your roots!’ They have accepted the challenge.

The Habsburgs were the sword of the Holy Roman Empire throughout the Middle Ages. They did their killing while supporting artists like Bach, Mozart and Schubert. They were very sophisticated as they slaughtered people.

Adolf Hitler used to love to attend the opera. He idolized the composer Richard Wagner. He even said that one couldn’t understand the Third Reich without understanding Wagner. That German composer was a sex pervert and an anti-Semite, yet Hitler was intoxicated by him.

In 1983, Pope John Paul ii was in Vienna—300 years after that city was attacked by the “barbarian Turks” and the Polish king rallied the European kings and drove them out. John Paul said at that time that Europe needed to return to its “Christian roots.” The present pope delivers the same message. But does this world know what those Christian roots really are?

The Vatican leaders understand their history. That is not true of most of the world, which is why many millions of people are so easily deceived about what the pope believes.

You can travel around Europe and see the Habsburg castles even today. Many of them have dungeons below them. Tour guides will tell you that the Habsburgs would have great feasts upstairs, listening to the finest classical music, while people were being tortured to death below. Similarly, Hitler could listen to beautiful opera while his minions were committing unspeakable atrocities.

In 1926, Hitler stated, “Christ was the greatest early fighter in the battle against the world enemy, the Jews …. The work that Christ started but could not finish, I—Adolf Hitler—will conclude.” He did not consider Jesus a Jew, but only a half-Jew because He was begotten by God.

However, the biggest problem Hitler posed to the world was not his fanatical anti-Semitism. That is only part of the story.

This is where many people are deceived. Hitler was the political head of the Holy Roman Empire.

Much of the world looks upon the Jews as God’s chosen people. In Vienna, Hitler came to believe that God had replaced the Jews with the Germans and the Holy Roman Empire. He embraced that idea in that cultured city, looking at the crown jewels and the opulence of the Habsburgs.

Hitler believed the Germans were God’s chosen people. This is why the crown jewels of that empire meant so much to him.

In 1938, Hitler had brought the insignia of the First Reich—the imperial crown, the orb of empire, the scepter, and the imperial sword—from Vienna to Nuremberg. At a rally, he vowed that they would remain there forever.

Among those imperial objects is also a spear called the spear of destiny. Many believe it is the spear that killed Christ—which is pure nonsense. The spear is supposed to have mystical powers. The legend states that if you look at this spear long enough, it will endow you with magical power. Hitler went there often and undoubtedly was mesmerized by it.

Lange’s Commentary says this about the fall of Jerusalem to the Roman armies in a.d. 70: “[T]he stamp of divine retribution was impressed upon the fate of Jerusalem and the temple, even for heathen eyes. We may call to mind the expression even of … Titus: ‘That God was so angry with this people that even he feared His wrath if he should suffer grace to be shown to the Jews’ ….”

Caesar Titus believed that God had commissioned him to punish the Jews. The “Holy” Roman Empire grew out of that mighty empire.

Lange’s continues: “[H]e refused every mark of honor on account of the victory obtained, with the attestation that he had been only an instrument in God’s hands to punish this stiff-necked nation. Compare the well-known expressions of Josephus, as to the height which the wickedness of his contemporaries had reached.”

Has evil reached this height in America, Britain and the Jewish nation today? Is God concerned about our wickedness?

Josephus said that Titus killed 1.1 million Jews and took 97,000 slaves. There are over a hundred prophecies that tell us biblical Israel is going to be punished by that same empire in the end time. Request our free booklet Germany and the Holy Roman Empire for a full explanation.

The seventh Holy Roman Empire has almost been completely resurrected in Europe today. Pope Benedict xvi is the spiritual head of that empire.

What happened with Rome and Jerusalem in the first century is only a type of what is going to happen on a much greater scale in this end time, according to Bible prophecy. Our free book The United States and Britain in Prophecy explains this thoroughly.

Few people, even in Europe, understand their own Christian roots. But they should understand. If they did, and knew where a return to those roots is leading the Continent, they would never want to find them again! The Holy Roman Empire is about to radically change the course of world history!

Biblical prophecy also shows that the resurrection of that empire is directly tied to the best news you could ever hear.