The Roman Catholic Church shows just how much power it really has. 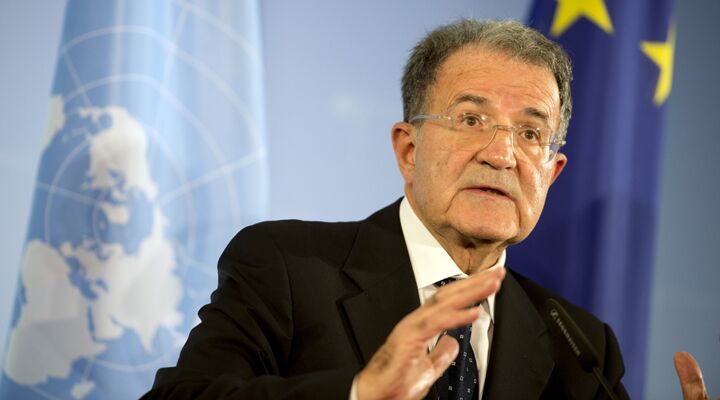 The Roman Catholic Church shows just how much power it really has.

The Vatican has brought down the government of Italy.

In medieval Europe, it was well-known that the head of state was under the pope. Under the feudal system that reigned throughout the continent, all the lords were responsible to the king, and the king to God. Of course, the king had to go to God through the one called the “vicar of Christ”: the pope.

But this system of papal control ended hundreds of years ago. Or did it?

How Prodi Got Pushed Out

On January 24, Italian Prime Minister Romano Prodi was forced to resign after he lost a vote of confidence in the Senate. The government fell, and legislative elections were scheduled for mid-April.

The fiasco started when Clemente Mastella, the Catholic leader of Italy’s Udeur Christian Democrat Party, resigned as justice minister January 17 after being implicated in a cash-for-favors scandal. The Udeur Christian Democrat Party was a member of Prodi’s coalition. It is a small party, having only three seats in the Senate—but when the ruling coalition has a majority of just two, the small parties make all the difference.

Initially Mastella said his party would continue to support the coalition government. Over the next weekend, he changed his mind. Prodi lost his majority in the Senate and was forced out of office. Why?

According to the Italian newspaper La Stampa, the Vatican changed Mastella’s mind for him. “Prodi’s government dared to challenge the ecclesiastical hierarchy for the second time and this time it has had its hands burned,” it wrote. The paper was referring to the incident last year where the Vatican almost caused the collapse of the Italian government over Prodi’s support of a same-sex unions bill (see our May 2007 issue). After some Catholics in the ruling coalition opposed the legislation, it was dropped, Prodi won a confidence motion, and the crisis dissipated.

Mastella is merely a “loudspeaker” for the Vatican, according to Franco Giordano, a Communist member of parliament. The Guardian reported that he is “one of the Vatican’s most prominent political ‘trusties.’” He was in contact with the Catholic Church in the days leading up to his withdrawal of support for the Italian government. Several newspapers reported that Catholic Cardinal Angelo Bagnasco was among the first people Mastella informed about his decision to rebel against Prodi.

In short, before talking to the Vatican, Mastella supported Prodi. Afterward, he didn’t.

Though the Vatican officially denies involvement in Prodi’s downfall, Catholic leaders do not shy away from taking credit for it. “What has happened is a result of a lack of dialogue with Catholics, which has penalized Catholic values in particular. Without this dialogue, the country cannot go forward,” said Cardinal Jose Saraiva Martins.

Cardinal Angelo Bagnasco, archbishop of Genoa and president of the Italian Bishops’ Conference, made several anti-Prodi comments the same day Mastella announced his decision. “The country is in pieces,” he said. “There is lazy administration and a shirking of responsibility.”

The next day, an interview with Bagnasco was published in the papal newspaper, L’Osservatore Romano. “Catholics must bring the contribution of spiritual and ethical values into the public square,” said Bagnasco. “The presence (in the public square) must be assumed by Catholics with greater persuasiveness and a greater capacity to respectfully explain our convictions, knowing that they come both from the gospel and from a common understanding of the value of life. …

“There is no real politics without high moral and spiritual values. Politics, in fact, has justice as its goal, and justice is a moral virtue. It therefore requires from all those involved in politics a high sense of the human person, the right to life and the family.”

In essence, what the cardinal was saying is that Catholics need to get more involved in politics, especially when it comes to protecting the family. In February last year, the Vatican forced Prodi to toe its line on same-sex unions. Now, it seems, it’s had enough of him entirely.

That just leaves the question of motive. What triggered the Vatican to remove Prodi now?

Prodi has always been unpopular with the Catholic Church with his anti-family stance on many issues. This may have simply been an opportune time to oust the prime minister and bring in a government more agreeable to the Vatican, nothing more.

However, the church may have had more on its mind than merely intervening to stop something it didn’t want. It may have intervened to push forward its own anti-abortion agenda.

Most members of Prodi’s cabinet would oppose a new campaign, supported by the Vatican, to increase Italy’s restrictions on abortion. Polls, however, have indicated that former Prime Minister Silvio Berlusconi would defeat Prodi in an election. Berlusconi leads Forza Italia, a Christian Democratic party. Historically, especially in the early post-war period, several of Italy’s Christian Democratic parties have been the unofficial parties of the Vatican.

According to his spokesperson on family issues, Sen. Maria Burani Procaccini, if Berlusconi’s center-right coalition wins the election, he will present a new bill on abortion. “The new law will allow abortion only in really justified cases and within the time-frame already envisaged,” said Procaccini.

It is possible that Berlusconi agreed to toughen the laws on abortion if the Vatican would clear his path to power. If Berlusconi does win the election, and follows through with these promises, the Vatican will have successfully changed Italian law in its favor.

Truly, abortion is a travesty. The fact that Italy’s law would forbid it is good. But what makes this sequence of events so remarkable, particularly when viewed in light of history, is how successful the Vatican is becoming in forcing its will upon the political landscape.

All over the world, particularly in Europe, the Catholic Church is becoming increasingly active in politics. In the tight run-up to Spain’s March general elections, for example, the Vatican sought to undermine the Socialist Prime Minister José Luis Zapatero. In December, Catholic bishops organized a rally that brought nearly 2 million pro-family demonstrators to Madrid. Catholic leaders’ criticism of Zapatero’s policies soon turned the rally into an anti-government demonstration. In January, the Spanish Bishops Conference released a paper effectively directing Spaniards to vote against the government and in favor of the conservative People’s Party. Zapatero has clashed with the church on abortion, same-sex unions, and religious instruction in schools. The Catholic Church badly wanted to oust him. This time, it failed. Spain is 94 percent Catholic. The fact that the Vatican failed to sway a large percentage of Catholic voters is certain to spur its efforts to take more firm control of the hearts and minds of believers.

Watch for the Vatican to become far more aggressive in its political agenda. As the Trumpet wrote the last time the Vatican attacked Prodi, “Ever since becoming pope, Benedict has used politics as one of his tools to instill Christianity back into the heart of Europe. Just a couple of months into his reign, for example, the Vatican called for a boycott of a referendum to change Italy’s strict fertility laws. The boycott was successful in voiding the referendum. Most recently, Benedict xvi told politicians in a papal document released March 13 [2007] they must not vote for laws that go against the Catholic Church’s position. Catholic legislators must strenuously defend the church’s ‘non-negotiable values,’ the pope stated. He said Catholic politicians must not vote for bills endorsing such issues as abortion and homosexual marriage, and also ‘called for Sunday to remain a day of rest’ (ansa, March 13). It is lawmakers’ social responsibility to give ‘public testimony to their faith,’ the pope stated” (May 2007).

This is about more than just blocking laws that promote immorality. The Catholic Church is seeking to unite Europe under the power of religion—the Catholic religion, and Catholic laws. It may appear to some that the Catholic Church’s activities are a good thing for all Italian and even all European Christians. Do not be fooled.

No longer does the Vatican have the overt power to make and unmake kings, to alter laws and dictate policy. The church lost almost all of its old feudal powers during the Reformation. It has wanted them back ever since. Soon the Vatican’s efforts will not be limited to a pro-family agenda. Watch for it to apply political pressure in other areas. Soon it will attempt to impose its beliefs in areas such as Sunday worship on the whole European continent.

The pope has demonstrated his political clout in Italy. Watch for it to extend across Europe.