What can we learn from killer weather disasters? 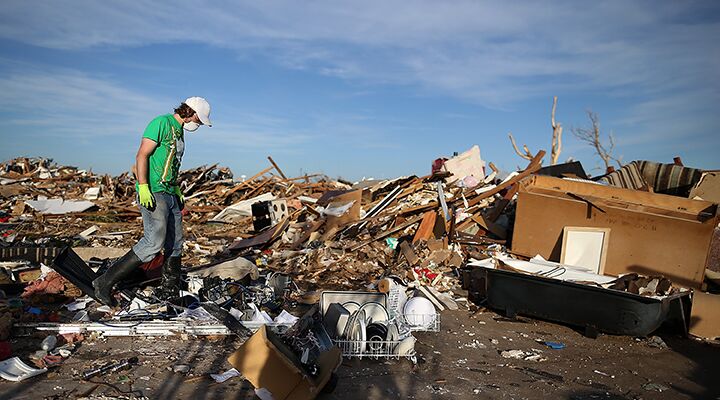 What can we learn from killer weather disasters?

Natural disasters bring back the stark realization of just how puny man is. The power of nature is well beyond that of mankind. Remember the impact of last year’s El Niño phenomena: Some of the worst disasters of the century—floods, firestorms, tornadoes, droughts —all made headlines and upset lives around the world.

But how long does the realization last? After a few months of relative calm, we are lulled back into complacency.

Throughout May 3 in Oklahoma City, I watched news weathermen sound tornado warnings on television. “Take these storms seriously,” they pleaded. Still, though the warnings came early and often, nothing could have prepared us for the devastation about to occur.

As the storms moved to the north and east, clearing skies illuminated the results of a deadly F5 tornado (the most destructive on the Fujita scale, with winds between 261 to 318 miles per hour) which ripped through 19 miles of metropolitan Oklahoma City. With a path of destruction a mile wide, nothing was left standing in the 60-mile long path of this deadly twister. The devastation was unimaginable. Though the intensity of the storms was not unheard of, what made these storms different was their course through densely populated areas.

“It’s all gone,” residents declared, referring to their personal property. Undoubtedly thankful to be alive, yet disheartened at their personal loss, dazed victims roamed the streets after the storm, taking in the devastation. Thousands of homes and businesses lay in rubble across the state.

All told, that fateful Monday-night storm generated an outbreak of 76 tornadoes across the fertile plains of central Oklahoma and Kansas: one of the top-ten worst ever in the U.S. It was the sixth-most-deadly tornado attack in Oklahoma history.

The storm system was said to have amazed veteran meteorologists. Dr. Baker of the Storm Prediction Center in Norman, Okla., admitted, “It is sobering to realize that even with all of our research and technology, we are…essentially powerless in the face of such violent tornadoes.”

Though not a popular message, the Trumpet tells its subscribers why “natural disasters” happen. In Isaiah 29:6 we are warned, “Thou shalt be visited of the Lord of hosts with thunder, and with earthquake, and great noise, with storm and tempest, and the flame of devouring fire.” The word “visited” would be better translated “punished.” God is sending these curses upon mankind in general, but more specifically against the nations of Israel, to turn them back to Him.

Turning to God in a time of disaster is natural. But God wants us to rely on Him through the good times as well. We have enjoyed peace and abundance for centuries, but in the coarse of all these blessings, we have forgotten where they came from.

Abraham Lincoln noted that fact almost a century and a half ago when he proclaimed a national day for prayer and fasting. “We have been the recipients of the choicest blessings of heaven,” he said. “We have been preserved, these many years, in peace and prosperity. We have grown in numbers, wealth and power as no other nation ever has grown; but we have forgotten God! We have forgotten the gracious Hand which preserved us in peace, and multiplied and enriched and strengthened us; and we have vainly imagined, in the deceitfulness of our hearts, that all these blessings were produced by some superior wisdom and virtue of our own.”

This great American president knew the source of our blessings. When the nation was under such inspired leadership, the people prospered. That is not to say disasters never occurred, but certainly not with as much regularity and intensity.

Today, thanks to press coverage of the Oklahoma City tragedy, we are all familiar with the scenes of devastation. Perhaps now, many more will take warnings issued by the National Weather Service seriously. Hundreds of lives were undoubtedly saved by early warning broadcasts from the NWS and news media.

But just think about how many more lives would be spared if all men would heed the early warning broadcast of Jesus Christ.