While politicians draw up plans to divide Israel’s capital city, archaeologists are busily digging up Jerusalem’s celebrated past. 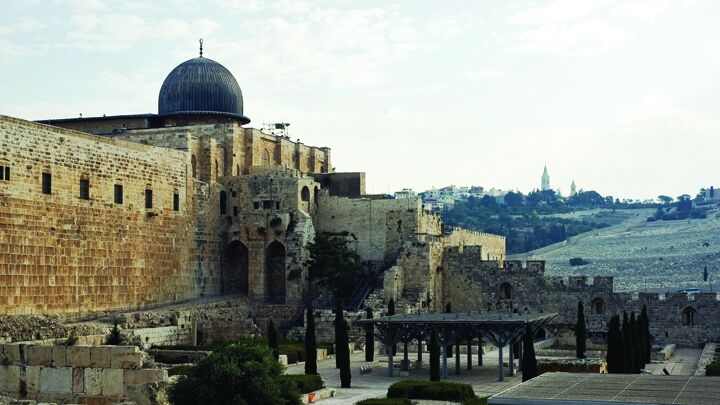 While politicians draw up plans to divide Israel’s capital city, archaeologists are busily digging up Jerusalem’s celebrated past.

Given the media exposure Jerusalem archaeology is beginning to receive, it is possible that this city’s past could spark more than just archaeological fervor.

In the Arab village of Silwan, archaeologists are hard at work excavating the original Jerusalem—the City of David. An Associated Press story on February 10 outlined how Silwan is “hard-wired into the politics of modern-day Arab-Israeli strife” and that new digs are cutting to the heart of who owns the Holy City today. “Palestinians and Israelis are trying again to negotiate a peace deal, one which must include an agreement to share Jerusalem,” the report said. “The collision in this neighborhood—between Silwan and the City of David—encapsulates the complexities ahead.”

AP explained that in recent years, the Elad Foundation, an organization associated with the religious settlement movement, has funded archaeological digs in the City of David, which is just outside the walled Old City. The area has expanded to become one of Jerusalem’s most popular tourist attractions, drawing 350,000 visitors a year, most of them Israelis. The archaeological park hosts numerous ongoing excavations both above ground and below.

Hezekiah’s tunnel, for example, was cut into the rock beneath the City of David about 2,700 years ago. In 1880, a Jewish boy discovered an inscription carved inside the tunnel that reads, “While the excavators were still lifting up their picks, each toward his fellow, and while there were yet 3 cubits to excavate, there was heard the voice of one calling to another, for there was a crevice in the rock, on the right hand. And on the day they completed the boring, the stonecutters struck pick against pick, one against the other, and the water flowed from the spring to the pool ….”

According to 2 Chronicles 32, anticipating a siege from King Sennacherib’s Assyrian forces, Judah’s King Hezekiah redirected water from the Gihon Springs by carving the 1,700-foot tunnel. The “conduit” is also mentioned in 2 Kings 20:20 and is corroborated by Sennacherib’s own written account of his campaign to conquer Jerusalem.

Besides the famous tunnel, many other recent discoveries have been made: palaces, pottery, city walls and bullae. In 1982, for example, the late Yigal Shiloh discovered a collection of 53 bullae (clay discs used to seal scrolls) within a building that would later be called the House of the Bullae. Shiloh assumed the structure must have been some kind of archive building, located close to the palace complex where the kings of Judah reigned.

That palace has now been located, thanks to Eilat Mazar’s recent work, and indeed, it’s situated on a hilltop platform just above the House of the Bullae. One bulla from Shiloh’s collection was inscribed with the Hebrew name “Gemariah, son of Shaphan.” Mentioned in Jeremiah 36:10, he was one of the princes of Judah during Jehoiakim’s reign. His father, Shaphan, worked for King Josiah (2 Kings 22:3).

Within King David’s palace, in 2005, Eilat Mazar found a bulla bearing this inscription: “Jehucal, son of Shelemiah.” He was a royal officer who worked in the administration of King Zedekiah, Judah’s last king before going into Babylonian captivity during the sixth century b.c. Jehucal is referred to twice in the book of Jeremiah (37:3; 38:1).

“The City of David shows us the history and archaeology of Jerusalem since the day it was founded. Jerusalem’s foundations are here,” archaeologist Eli Shukrun told the Associated Press. “It’s hard to list another city similar to this one,” says Roni Reich of Haifa University. “And this hill is where it all started.” AP notes, “Archaeologists not connected to the City of David digs don’t dispute their importance” (op. cit.).

The location of the archaeological park, though, is what makes it so controversial. It’s imbedded in the low-income Arab neighborhood of Silwan—in the annexed half of Jerusalem that Israel captured in 1967 and which the Palestinians want for the capital of a Palestinian state. Silwan has about 40,000 Arab residents.

While Israel wants to reconnect with its past, Palestinians accuse the Jews of using archaeology as a political weapon. AP says the Elad Foundation has a yearly budget of about $10 million, most of it from donations, “and is buying up Palestinian homes in Silwan to accommodate Jewish families. Around 50 have moved in so far, living in houses flying Israeli flags and guarded by armed security men paid for by the Israeli government.”

January 3, the South China Morning Post also reported on the growing divide between Arab residents of Silwan and the activities Elad sponsors in the City of David: “Abed Shalodi, a Silwan resident who helps the alternative archaeologists conduct their tours, views Elad as a threat. ‘They want to take over all the land here. We can’t live with them because they don’t want us here. They want the land without the people.’”

The article then quoted Elad spokesman Doron Spielman as saying that while “Our goal is that it should be as strongly Jewish or Jewish-identified as possible,” it is unrealistic to expect the area to become completely Jewish. Spielman says dozens of Arabs in Silwan are in fact employed by Elad, and that the foundation’s activities include projects to beautify the area for Palestinian residents. But, he said, “We do not deny we have a Zionist dream—to reveal the ancient city beneath the ground and create a thriving Jewish neighborhood above the ground.”

Archaeologists working at the site deny any connection to politics, but some of their colleagues charge them with being complicit with Elad’s desire to move Jews into the Arab neighborhood. The City of David dig “is connected by its umbilical cord to politics,” said Rafi Greenberg, an Israeli archaeologist from Tel Aviv University. “No amount of dealing with ceramics and rocks can obscure the fact that the work is being done to establish facts in the present,” he said.

In attempting to delegitimize Israel’s right to exist, Palestinian leadership has been actively fighting on two fronts in order to destroy that link between the Jews and the land of Israel. While they adamantly maintain “that the temple of Solomon was fictitious,” Dore Gold wrote in The Fight for Jerusalem, “they simultaneously [attempt] to destroy any archaeological evidence proving otherwise”—and with little or no resistance from the Israel Antiquities Authority.

On the other side of the struggle, in an increasingly irreligious and secular Western world, about the only things left to re-establish that link are the ancient ruins buried beneath the surface of Israel’s homeland. “In almost every place where archaeological digging is taking place throughout Israel,” cnsNews.com reported, “archaeologists are uncovering Jewish artifacts and history” (Nov. 14, 2007). This past, of course, is grounded in the Hebrew Bible, where Jerusalem is referred to more than 650 times. Founded by King David, Jerusalem became Israel’s capital city one thousand years before the establishment of Christianity—1,700 years before Islam.

These new discoveries are sure to find a more prominent place in Israel’s future political discourse, especially after peace talks with the Palestinians break down.