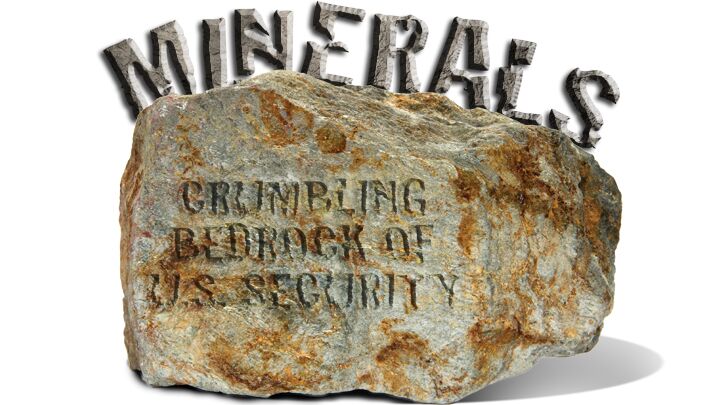 During the War of Independence, America learned the painful lesson of reliance on foreign nations. The newborn United States had to rely on France and the Netherlands to supply everything from iron and gunpowder to blankets and clothing, and Britain routinely cut America’s supply lines. Seeing this weakness, America’s founders implemented a national strategy promoting industrial and military self-sufficiency in order to establish the nation’s security.

It seems America has forgotten that lesson. One specific example is in mineral production. America’s leaders have allowed the nation’s once formidable mining industry to erode. Many minerals—including some that are strategically important for the military—are no longer produced in the United States at all. Due to lack of investment, radical environmental activism, and low-cost foreign competition, many of America’s former mining giants have turned off the drills, closed the refineries and sent the workers home, or have chosen to develop new production outside the U.S.

It’s not that America wasn’t warned.

Back in 1985, the secretary of the United States Army testified before Congress that America was more than 50 percent dependent on foreign sources for 23 of 40 critical materials essential to U.S. national security.

The year before, in a U.S. Marine Corps study, Maj. R.A. Hagerman wrote, “Since World War ii, the United States has become increasingly dependent on foreign sources for almost all non-fuel minerals. … The availability of these minerals have an extremely important impact on American industry and, in turn, on U.S. defense capabilities. Without just a few critical minerals, such as cobalt, manganese, chromium and platinum, it would be virtually impossible to produce many defense products such as jet engines, missile components, electronic components, iron, steel, etc.

“This places the U.S. in a vulnerable position with a direct threat to our defense production capability if the supply of strategic minerals is disrupted by foreign powers” (“U.S. Reliance on Africa for Strategic Minerals,” April 6, 1984; emphasis mine).

A look at America’s mining production since the mid-to-late 1980s is not just shocking, it is chilling.

Cobalt, for example, is one of the most critical minerals used in America and is considered a strategic metal by the U.S. government, meaning that its availability during a national emergency would seriously affect the economic, industrial and defensive capability of the country. It has many diverse commercial, industrial and military applications including superalloys (used to make parts for jet aircraft engines), magnets, high-speed steels, catalysts for petroleum and chemical industries as well as for paints, varnishes and inks.

Just before America entered World War ii, it made a scramble to begin cobalt mining. Production began in 1940 and continued until 1971, when the mines were closed and cobalt mining ceased to exist in America. The most recent data available from the U.S. Geological Survey (usgs) shows that, as of 2004, the over 8,700 tons the nation consumes is 100 percent imported. Cobalt sells for more than $45,000 a ton.

Manganese is another essential mineral America no longer produces. It is essential to iron and steel production by virtue of its sulfur-fixing, deoxidizing and alloying properties. Manganese is also a key component of certain widely used aluminum alloys and of dry cell batteries and plant fertilizers.

America no longer produces any chromium either, a mineral the usgs calls “one of the nation’s most important strategic and critical materials.” Chromium is used to harden iron, steel and other nonferrous alloys.

Then there is a whole host of other minerals, like iron, zinc and titanium, that America produces at greatly reduced volumes.

Allowing such a wide swath of the nation’s mineral production base to dry up and disappear is a critical miscalculation.

You can’t just turn mines on and off at the flick of a switch. “The average person doesn’t stop to think that a process of several years is involved from the point of minerals exploration to on-site development to extraction, smelting and manufacture of the primary products,” former American Mining Congress President J. Allen Overton once noted. “Once lost, it will take years—if ever—to recover it.”

Look Who’s Taking Over the Business

As America has been divesting itself of mineral-producing capacity, other nations have been quick to embrace it. Unfortunately for the U.S., the ability to control global production of strategic minerals is an incredibly powerful political weapon.

China, for example, now completely dominates rare earth minerals—minerals that the U.S. supplied over 20 percent of not long ago.

“The whole family of ‘-ums’ like gallium, rhenium, neodymium and indium, is fascinating. And frightening!” reports the Miner Diaries investment bulletin. “They are an essential ingredient in many technology-related sectors and demand is growing at 10-to-15 percent a year.

“Yet it is completely dominated by just one country—around 95 percent of supply comes from China” (Jan. 30, 2008).

Over the past two years, China has begun restricting exports of these materials. The end result is, U.S. manufacturers who wish to stay in business are being forced to move their research and development and manufacturing facilities to China to gain access to rare earth minerals. An example of this was the sale and relocation of Magnequench, a company formerly based in Indiana that produced 85 percent of the rare earth magnets used in the guidance systems of U.S. military smart bombs. Without rare earths, you don’t have protective coatings, blast protection, guided missiles, lasers, modern transportation, laptop computers, tvs, or even iPods.

In 1992, China basically admitted to the world what it was planning to do. Chinese ruler Deng Xiaoping coined the statement, “There is oil in the Middle East, there is rare earth in China.” Then in 1999, Chinese President Jiang Zemin said, “Improve the development and applications of rare earth, and change [China’s] resource advantage into economic superiority.”

Meanwhile, America has closed its only rare earth mine (one owned by Unocal, which the Chinese state-owned company cnooc tried to purchase in 2005), has boarded up the Rare Earth Information Center, and has not only ceased stockpiling rare earth minerals but has also largely sold off national stockpiles.

If any doubt exists as to China’s intentions, on February 4 Chinese state-owned companies announced four deals in the resources sector. The deals came only two days after Chinalco, China’s aluminum company, grabbed a 12 percent stake in Rio Tinto to prevent the Australian mining giant bhp Billiton from gaining control over the $132 billion diversified mining giant.

The Times called China’s action “the first shots in a new economic war.”

And much of the rest of the world, including the European Union, is scrambling to tie up control of strategic minerals in Africa and South America. America is being shut out, and at a time when much of its domestic resources production is hitting rock bottom.

If Americans truly understood the implications of being resource-dependent on unfriendly foreign nations, especially at a time of intensifying anti-Americanism, global instability and resource competition, they would be acting quickly. Sadly, this is not the case.

The Bible speaks of a time when America will be besieged by its enemies. America’s over-reliance on foreigners for essential needs is a sign that time is drawing near.

But it didn’t have to be this way. There is a reason America as a nation is blessed with a range of unexploited minerals and other natural resources envied around the world. Why? Our book The United States and Britain in Prophecy explains. Request a free copy.

Abraham Lincoln may have stated it best when he said: “We find ourselves in the peaceful possession of the fairest portion of the Earth, as regards fertility of soil, extent of territory, and salubrity of climate. … We, when mounting the stage of existence, find ourselves the legal inheritors of these fundamental blessings. We toiled not in the acquirement or the establishment of them.”

Later Lincoln said: “It is the duty of nations, as well as of men, to own their dependence upon the overruling power of God … and to recognize the sublime truth, announced in the Holy Scriptures and proven by all history, that those nations only are blessed whose God is the Lord. … We have been the recipients of the choicest blessings of heaven. We have been preserved, these many years, in peace and prosperity. We have grown in numbers, wealth and power as no other nation ever has grown; but we have forgotten God. We have forgotten the gracious Hand which preserved us in peace, and multiplied and enriched and strengthened us; and we have vainly imagined, in the deceitfulness of our hearts, that these blessings were produced by some superior wisdom and virtue of our own.”

America is rapidly losing those blessings. The mineral bedrock of our industry, economy and military is crumbling before our eyes. For many years, the Trumpet has alerted its readers that, based on Bible prophecy, the U.S. and other English-speaking nations are headed for a time of national calamity. America must turn to the one true and most important bedrock of any society, the Rock that determines our morals and should govern our lives. Only then will America truly stand on a firm, rock-solid foundation.

Some of the minerals the U.S. no longer produces: