Israel is facing its greatest crisis since being founded in 1948. Its survival as a nation is at stake. It can survive only if Israelis return to their roots. 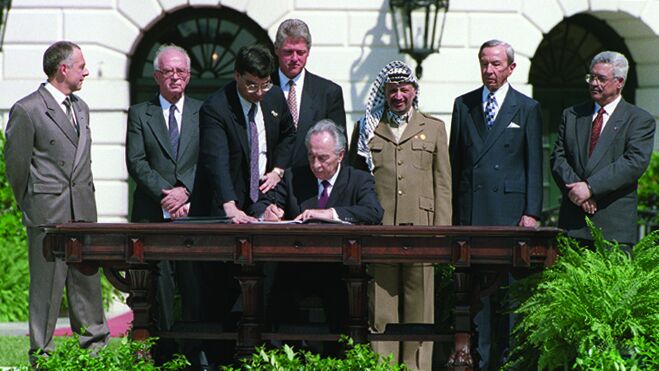 Israel is facing its greatest crisis since being founded in 1948. Its survival as a nation is at stake. It can survive only if Israelis return to their roots.

Israelis were inflicted with a terminal wound in 1977, when Israel hosted Egyptian President Anwar Sadat in Jerusalem to begin discussing the possibility of a land-for-peace deal between their two states. These talks led to the formal treaty of 1979 in which Israel handed Egypt a lovely little gift called the Sinai Peninsula in exchange for a promise of peace. This deal set the stage for concessions to the Palestinian Liberation Organization that began in Oslo in 1993.

“Ever since, Arafat has sought his pound of flesh in terms of the fulfillment of the promises which Peres made to him,” we wrote in our March/April 2001 issue. “It is no secret that Shimon Peres … pulled the strings of the assassinated Rabin’s government’s negotiations with the Palestinians. His initiatives led to the exchange of letters between Rabin and Arafat in September 1993, which in turn led to the signing of the ‘Declaration of Principles of Interim Self-Government Arrangements’—termed the Oslo Accord—signed by Rabin and Arafat in Washington that same year. The Oslo Accord became the foundation upon which the past seven years’ efforts to find a peaceful settlement in Palestine have been built.”

The Oslo Accord specified that the Israeli military withdraw from most of the Gaza Strip and from the town of Jericho in the West Bank.

On Sept. 24, 1995, Yitzhak Rabin signed Oslo ii, agreeing to divide the West Bank into three zones, an act that ended up costing him his life. He was assassinated shortly thereafter, and replaced by Shimon Peres, one of the architects of the failing peace process.

Today, Shimon Peres is the president of Israel, serving under Prime Minister Ehud Olmert. Mr. Peres is once again a key player in the “peace” negotiations. He was there at the beginning of the Oslo Accord, and it appears he will be there at the disastrous end.

From the beginning, the Oslo Accord has had a catastrophic pattern of failures. Still, several of Israel’s leaders have refused to learn the obvious lessons.

One of the cities that Israel surrendered was Jericho. The great Joshua of the Jews’ Bible had no problem conquering Jericho anciently and ruling over that city. Are there lessons in that example that the Jews must learn?

Most Jews today would find that subject too embarrassing to even discuss. In this modern time, they are deeply involved in the Oslo Accord and in losing battles.

The Cause of Our War Against Terrorism

Now let’s highlight the pinpoint accuracy of a Trumpet forecast from 1993. A few weeks after the Oslo Accords were agreed upon at the White House, I wrote this: “Yitzhak Rabin has stated publicly that Israel must come to terms with the Palestinians sooner rather than later. Why? Because Islamic fundamentalism is on the rise! Surely we must see a certain desperation in this treaty” (November 1993). Rabin and Arafat came together, I went on to write, “because of the same radical Islamic movement.” Commenting further on the impact this radicalization was having in the Middle East, I wrote, “Today the radical Islamic movement is causing other nations to fear—even motivating peace treaties. But these treaties are destined to fail.”

Why must these peace treaties fail? Because they are dealing with the effect rather than the cause of the terrorist problem. You can’t remove the problem if you don’t remove the cause.

The Jews entered into the Oslo Accord because of a broken will, which is what causes their shameful fear.

Who is behind the radical Islamic movement? Iran. We have been saying so for 14 years. The Iranians began state-sponsored terrorism. They continue to fuel the terrorist war in the Middle East.

Iran is the head of the terrorist snake!

The only way to win the war on terror is to either subdue or conquer Iran. America and Israel have ample power to do so, but they cower in fear because they lack the will to strike the head of the snake.

Wouldn’t it be far better to act now, before Iran gets nuclear weapons? You can be sure Iran will cause a much more dangerous war in the Middle East when that happens. (Our free booklet The King of the South describes Iran’s dangerous role in the Middle East’s future.)

According to Yehuda Avner, who served on the staffs of five Israeli prime ministers during his political career, the secret negotiations in Oslo in the months leading up to the White House handshake were Rabin’s way of establishing common ground between Israel and its “inner circle” of neighbors—nations he believed were equally threatened by that outer circle. Rabin was trying, Avner said, to “find some kind of dialogue with the secular, nationalist movement, as opposed to those who are doing their level best to theologize the conflict.”

That might sound reasonable, but Mr. Avner completely misses the point! The real story from 1993 is not that Rabin identified the outer circle as Israel’s greatest security threat. It’s that he turned to the inner circle for help—to Yasser Arafat and the Palestinian Authority in particular.

“Why would Israelis trust the greatest terrorist in the Middle East, Yasser Arafat, to protect them from terrorism?” I asked in April 1996. “They have more than enough power to protect themselves. But they lack the will to use it!”

Look at what negotiating with Yasser Arafat has brought upon Israel. Giving the Palestinian Authority self-governing powers in the West Bank led to the second intifada, forcing Israel to begin constructing a 465-mile security barrier. The Lebanon withdrawal triggered the Second Lebanon War and Israel’s embarrassing retreat in the summer of 2006. And pulling out of Gaza cleared the way for the violent emergence of “Hamastan,” which rules the Gaza Strip today.

The Israeli government says it must negotiate now because of the meteoric rise of radical Islam. It wants to make more peace pacts with less-violent terrorists like Fatah. But how important are those peace agreements? The Palestinians have broken virtually every one of them!

How pathetically weak is Israel to trust its enemies by giving them land for empty promises.

There Is a Wondrous Hope

The Jews have given Hebron to the Palestinians. King David ruled there during his first seven years as king. He ruled his remaining 33 years in Jerusalem.

Jewish leaders have discussed giving up East Jerusalem to the Arabs. That would even include the City of David, just south of the Temple Mount. It certainly seems that some Jewish leaders would even be willing to surrender that area from where David ruled Israel.

David’s throne was in his massive palace. In the last two years, the walls of that palace have been uncovered by Dr. Eilat Mazar. In some places the walls are 16 feet thick!

There is proof galore that the great King David really lived and won his many wars!

He didn’t enter into one peace pact with his vile enemies. By faith, he conquered his warring adversaries!

And here is the real shocker. The Old Testament teaches us that David is about to be resurrected in these latter days and rule over Israel again! (Jeremiah 30:9).

Does Israel—or America—believe that astounding history and prophecy? Most people are intensely embarrassed by such teachings.

Therein lies the problem! The suffering won’t stop until we have more of the faith that David had.

It is not that difficult to prove that the Bible is God’s inspired Word. But who believes it?

The history of David reveals how to solve the terrorist problem. It contains a message of splendid hope. In 1948 many Jews believed in their Bibles. Few do today. They often scoff at the words in their own Bibles. Their faith is degenerating before our eyes. The Oslo Accord is a classic example of their lack of faith. Before long, their faith will be restored. But they will have to suffer until they learn that lesson. It is what their trials today are all about.

Are we too sophisticated today to choose King David and his way of life? Presently, America and Israel are choosing the Oslo Accord and the way of death.