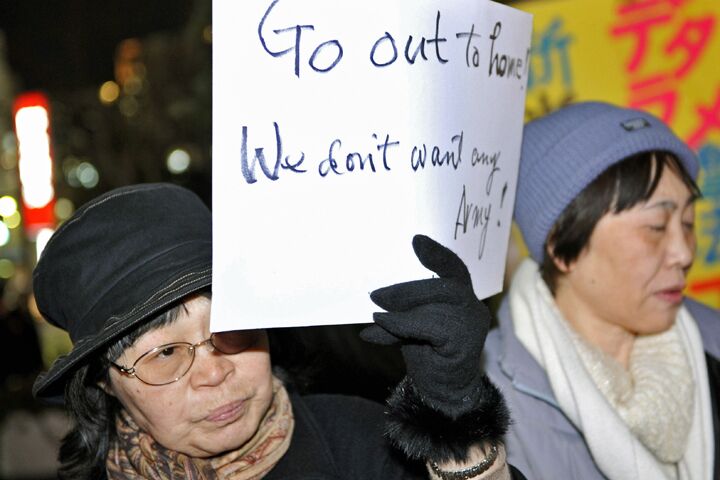 Could the actions of a few irresponsible U.S. soldiers further crack the Japan-American military alliance?

Outrage has been unleashed across Japan over the suspected rape of a 14-year-old girl by a U.S. marine stationed on the Japanese island of Okinawa.

On February 11, the marine was arrested on suspicion of committing the offense. Although he denied the charge, local Okinawans and Japanese officials are outraged at the alleged incident.

“It is unforgivable,” said Japanese Prime Minister Yasuo Fukuda. “It has happened over and over again in the past and I take it as a grave case.”

When Fukuda said that instances like this have occurred “over and over again” he was most likely referring to a 1995 case where a 12-year-old Japanese schoolgirl was gang raped by three U.S. servicemen. This incident prompted huge Japanese protests calling for the U.S. military to leave Okinawa, and set in motion a process of U.S. troop reduction on the island.

U.S. Ambassador Thomas Schieffer flew to Okinawa last week to offer personal apologies for the alleged rape and promises of tighter military discipline in the future. After Schieffer’s apology, a U.S. marine was arrested for drunk driving and another marine broke into an Okinawan household and was found drunk on the sofa at 4:25 a.m. Following these incidents, Japanese government spokesman Nobutaka Machimura said the Japanese would take the issue up with U.S. Secretary of State Condoleezza Rice when she visits Japan next week.

Instances of misconduct by a few irresponsible U.S. marines are casting a bad image on the more than 40,000 U.S. troops stationed in Japan.

“This will have a big impact on future U.S-Japan relations,” said Japanese Defense Minister Shigeru Ishiba.

Already Okinawan lawmakers have passed a resolution demanding compensation for the suspected rape victim and urging the United States to reduce the number of troops stationed on Okinawa.

For some time now, Washington has been interested in having Tokyo take on more responsibility for the defense of Japan. A drawdown of U.S. troops from Okinawa could be a step in this direction.

Consider the following quote from the Economist (February 13):

The rape raised questions about how to orient the [America-Japan] alliance in a post-Cold-War world. Under the planned realignment, Japan will take more responsibility for its own security, while American forces will retain their ability to respond quickly to regional emergencies—everything from terrorist threats to an invasion of Taiwan by China.As a result, many American servicemen are on their way out of Japan. Eight thousand marines are due to leave Okinawa for Guam, an American dependency, by 2014, leaving the heliport a lightly-manned forward base for emergency response.

Japan’s post-World War ii constitution theoretically bars Japan from maintaining “land, sea and air forces, as well as other war potential,” although this has not prevented Japan from building a sizeable defense force, and deploying personnel in non-combat peace-keeping roles internationally. From the American defeat of Japan in 1945 to the fall of the Soviet Union in 1991, America took full responsibility for the defense and security of Japan. After the fall of the Soviet Union, however, the military relationship between Japan and America began a realignment process. Stratfor reported on April 23, 2003:

But as the international system started to equalize a few years after the collapse of the Soviet Union, Washington and Japan both saw the same strategic long-term threat: the rise of China. Washington since has tacitly and actively encouraged Japan to alter its defense policy and do away with the constitutional limitations on its armed forces.

But things have not worked out as America initially hoped.

In Japanese political circles, Fukuda has been hailed as the most pro-China leader since his father, Takeo Fukuda, was prime minister in the late 1970s. The elder Fukuda established what is called the Fukuda doctrine: the policy that Japan should forever renounce aggression against its Asian neighbors and instead focus on building mutually beneficial ties with them. The younger Fukuda is continuing his father’s legacy and working to make Japan more Asia-focused.

With Japan having built up its own military defense force and forging strong ties with the Asian nations against which America was previously committed to defending it, the Japanese have less and less of a need for American defense forces to be stationed on Japanese territory. As a matter of fact, as Sino-American relations deteriorate, Japan will increasingly find that it cannot work closely with both China and the U.S. at the same time.

Eventually, Japan will have to choose its friends.

Incidents like the alleged Okinawa rape case only serve to hasten the day when Japan will ditch its alliance with the U.S. in favor of alignment with Asia.