The data and the real-life proof is in: Fathers make a huge difference. 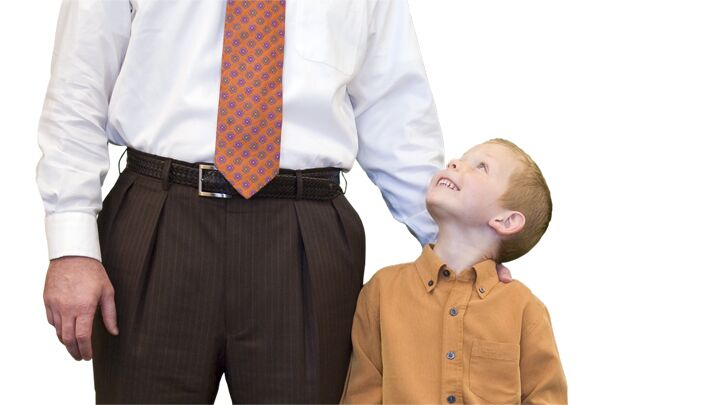 The data and the real-life proof is in: Fathers make a huge difference.

On New York’s East Twentieth Street, a man walks up and down a candlelit room. The shadows cast by his large, powerful physique move softly, almost gingerly. He moves this way because in his powerful arms he holds “a very small person.”

An almost appalling contrast to the broad, brawny father, the limp and weak form of the child gasps desperately to choke down a breath. Another violent respiratory attack wracks his weak body so violently that his worried parents fear he will die before the morning.

Although the child survives the night, his long list of ailments apparently will doom him to a life of disability: chronic colds and coughs, nausea, fevers, diarrhea, sleeplessness, lack of appetite, malnutrition, and, of course, relentless asthma.

“I feel badly,” the toddler tells his mother. “I have toothache in my stomach.”

When the man is at work, his son’s condition is exacerbated. His mother is afraid he will never turn 4. But the mere sight of his father’s robust frame striding back home again through the doorway is virtually a miracle cure for the little boy, who all but worships his father.

This father’s gifts of fruit, treats, trinkets and, most of all, attention and love, filled his children’s hearts with an adoration that was ardent and complete.

But Theodore Roosevelt Sr. would do much more for his sickly child than feed him peaches as he lay spread-eagled on the porch or hold him close when the inevitable asthma attacks returned. Besides demanding strict discipline and charitable morality from his children, Theodore Roosevelt challenged his all-but-invalid son: “You must make your body. It is hard drudgery to make one’s body, but I know you will do it.”

With the help of his father, “Teedie” Roosevelt Jr. would do it. The “very small person” would build for himself a powerful frame and a personality to match, graduate from Harvard, travel the world, lead men in combat, enforce the law, ranch, develop his mind, and become the most dynamic, bombastic, and youngest man to literally bound up the steps of the White House as the president of the United States of America.

Thirty-seven years later, Theodore Roosevelt would remember his father as “the best man I ever knew.”

“Handsome dandy that he was, the thought of him now and always has been a sense of comfort. I could breathe, I could sleep, when he had me in his arms. My father—he got me breath, he got me lungs, strength—life.”

Fifteen miles and over a century away, children in Newark, New Jersey, might consider such an environment and such a father as Theodore Roosevelt Sr. a fantastic fairy tale.

The city is suffering from an intensifying horror story of violent crime, explosively punctuated by the execution-style murders of three young people in a schoolyard in early August. The college students were forced to kneel against a wall and then shot in the head at close range in a gruesome slaying that brought Newark’s bloody crime problem back into the spotlight.

New Jersey’s largest city watched its homicide rate jump from 68 killings in 2002 to 106 in 2006. Its violent crime rate is twice the national average.

“Newark doesn’t really have crime hot-spots,” one prominent crime expert said. “It has a couple of cool spots.”

Four of the six suspects arrested were teenagers: an 18-year-old, a 16-year-old and two 15-year-olds. It’s hard to imagine—perhaps impossible—that any of these children had a father or knew a father or had ever heard of a father like Theodore Roosevelt Sr.

More of the Same

The usual hue and cry followed the slayings. Officials vowed to uncover the root causes and the real solutions to Newark’s endemic violence. Some say more stringent measures against repeat offenders will prevent such horrific headlines. Others feel more effective prosecution is the answer; in the county containing Newark, fewer than half of the murders result in convictions. Still others think more security cameras will do the trick and are increasing Newark’s surveillance cameras from 24 to 74.

“I think it will be a good idea, surveillance cameras, because Newark is scary,” one resident said (cbs, August 14).

The Economist reported that the “real problem” is an ineffective policing strategy, and that the real solution is developing a new crime-fighting theory to fit mid-sized cities (August 17). And from all quarters, leaders are calling for additional funding, hoping that a congressman signing another check will end the misery.

But reading these clichéd “solutions” to the “real problems” behind our sick society is almost as unbearable as the endless accounts of the crimes themselves.

When it comes to violent crime and the rest of our societal ills, we are only managing the chaos. We are not solving the real problem.

The real problem in 21st-century Newark and in cities across the United States and around the world is this: They lack enough strong fathers.

Newark neighborhoods are especially afflicted. Only 32 percent of boys and girls in the city grow up living with two parents of any kind—whether they are Rooseveltesquely involved in their lives or not. A shocking 60 percent grow up with no fathers at all.

Steven Malanga cut through the noise of “new initiatives,” “promises of reform,” and “additional funding” in his article “City Without Fathers” (City Journal, August 9). “Behind Newark’s epidemic violence are its thousands of fatherless children,” Malanga wrote.

“[M]uch of the reaction, though well intentioned, misses the point. Behind Newark’s persistent violence and deep social dysfunction is a profound cultural shift that has left many of the city’s children growing up outside the two-parent family—and, in particular, growing up without fathers.”

“It isn’t that traditional families are breaking up,” he continued, “they aren’t even getting started. The city has one of the highest out-of-wedlock birthrates in the country, with about 65 percent of its children born to unmarried women.”

Malanga goes on to report that 70 percent of fatherless children in Newark are born into poverty, and 83 percent of poor families there are led by single parents.

Children born out of wedlock are three times likelier to drop out of school than the average student, and much more likely to become a welfare-dependent adult. Around 70 percent of prisoners convicted of violent crimes grew up fatherless.

By these statistics, just having a father in the house, even if he is less than ideal, makes a difference in many cases.

As destructive as the effects of fatherlessness are, the problem is only getting worse. Nationwide, a third of children are born to mothers who are unmarried. Four out of 10 children—more than 25 million—live without their biological fathers.

The truth is, there is an active and successful conspiracy in Western culture aimed at reducing and ultimately destroying fatherhood. Fatherlessness continues to destroy young people because leaders and experts tell you—despite all evidence to the contrary—that it isn’t even a problem.

Anti-father thinking found eloquent expression in “Deconstructing the Essential Father,” a June 1999 American Psychologist article in which researchers Louise B. Silverstein and Carl F. Auerbach asserted that fathers are obsolete. They claimed that “a wide variety of family structures can support positive child outcomes.” If you wonder what that means, Silverstein and Auerbach made it clear: “Neither the sex of the adult(s), nor the biological relationship to the child has emerged as a significant variable in predicting positive development. One, none, or both of those adults could be a father (or mother).” This is a simple case of allowing politics to trump truth. Such thinking ignores an enormous amount of research.

Elsewhere, the authors explicitly stated: “We acknowledge that our reading of the scientific literature supports our political agenda” (emphasis mine). What agenda is that? “We are … interested in encouraging public policy that supports the legitimacy of diverse family structures, rather than policy that privileges the two-parent, heterosexual, married family.”

Such thinking has found its way firmly into public education, into mainstream entertainment, into the political views of “centrist” candidates. But as much as these authors would disagree, public policy that supports same-sex parenting and other non-family cohabitation situations is intended to destroy the traditional family, which is built around fatherhood.

Western society has divorced itself from fatherhood. Reasoning from more than two generations of evolutionary hypothesizing, educators and the leaders they produce have declared the traditional father not only non-essential, but also an archaic, oftentimes negative influence. Politicians are increasingly taking up the cause on behalf of scholars like Silverstein and Auerbach. For instance, Democratic presidential candidates have committed to overturning the Defense of Marriage Act, which, for federal purposes, defines marriage as a heterosexual union. In October, California Governor Arnold Schwarzenegger signed four bills, written by California’s first openly lesbian senator, that promote homosexual, bisexual, transsexual and other deviant lifestyles. Two of them affect the classroom, as early as the kindergarten level; one suggests that these lifestyles must be portrayed in textbooks and instruction, and in a positive light. “Dad” and “Mom” or “husband” and “wife,” for instance, will likely have to be eliminated from textbooks, instruction and activities, or portrayed alongside homosexual, bisexual and transsexual ideas. Another of the bills prohibits state funding for programs that do not support deviant sexual practices, which affects churches, day cares, preschools, senior services and other organizations.

Saying that “a wide variety of family structures” that delete the father can be successful constitutes blatant disregard for the definitive literature on the subject, the Holy Bible. Herein lies another major problem: Even religious leaders act shy about what God actually says in His Word about family and the father role, which represents Him.

Newark households give us a reality check, if we’re willing to accept it.

The Rise of the Father

Millions of children worldwide grow up with fathers who do not know and do not fulfill their God-ordained roles. Some simply disappear as soon as they hear “I’m pregnant.” Some are too absorbed in their careers to pay any attention to their children when they arrive home. Some are worse for their families when they are home than when they are absent.

The Rise of Theodore Roosevelt, by Edmund Morris, describes a giving, attentive, masculine—though imperfect—father. Millions of children desperately crave the attention, constructive discipline and even the restrictions with which Theodore Roosevelt Sr. governed his family.

Yet even the father of the dynamic, active, iconic 26th president of the United States did not fully understand the deep truth and awesome meaning behind fatherhood. Although he employed some of the same principles that can be found in the Bible, he did not know about the incredible human potential revealed in the divine institution of family. However, you can know the inspiring purpose and vision behind family by reading The Missing Dimension in Sex, available free of charge upon request.

Don’t be discouraged. The epidemic of fatherlessness and the ugly world it is producing is simply the last labored gasp of a world that must soon admit it hasn’t figured out how to live. Although fatherhood seems doomed in our so-called advanced Western society, those who are attempting to deconstruct it altogether are actually on the losing end.

Soon, the ultimate Father will intervene in human affairs, leaving the voluble “experts” speechless. Through His Son, God the Father will re-establish family and fatherhood—which have been under attack since the very first family in Eden—as the core of humanity. He will enforce His laws of love governing family.

As a result, the full, incredible human potential of each child will be unlocked. Children everywhere will have a loving, giving, masculine, authoritative father to guide them, not into the way he thinks is best, but into the right way of living clearly commanded in God’s Word, the Holy Bible.