Last November, six leading proponents of a type of governance commonly called Third Way met in Florence to publicly proclaim their brand of politics as the answer to the world’s problems. In June the group met again, this time in Berlin, the new diplomatic capital of the EU, their numbers having more than doubled. 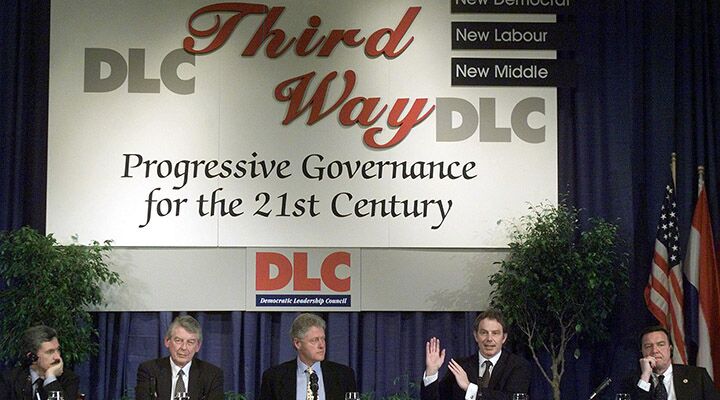 Last November, six leading proponents of a type of governance commonly called Third Way met in Florence to publicly proclaim their brand of politics as the answer to the world’s problems. In June the group met again, this time in Berlin, the new diplomatic capital of the EU, their numbers having more than doubled.

Perhaps the most telling comment from the 14 national leaders who met in Berlin on June 3 to discuss developments in “Third Way” politics came from Karsten Voigt, the U.S. specialist at the German foreign ministry. Voigt observed that the meeting was “one of the rare times to discuss the issues that drive them most—social issues, the problems of their constituencies, how society should change” (AP Worldstream, June 3).

Leading lights at the conference were U.S. President Clinton, Chancellor Schröder of Germany, and French Prime Minister Jospin. They were joined by the prime ministers of Italy, Holland, Portugal, Sweden, Greece, New Zealand and Canada. The presidents of Argentina, Brazil and Chile, even South African President Thabo Mbeki, also attended.

Billed under the title “Progressive Governance in the 21st Century,” this conference may be the swan song of some of these center-left advocates of Third Way politics. Why? Not because the Third Way will become less fashionable. We have shown in previous articles that this Third Way between communism and capitalism is but old fascism in new clothes, revived.

But what is worthy of note is that the leaders of three major nations in Europe were not represented at this Third Way conference: Austria, Italy and Spain—the reason being that they are presently at the forefront of a center-right swing in Continental politics, whereas the conferees all hailed from center-left governments.

The term “Third Way” is not new. When British Prime Minister Tony Blair rode into power in Britain decrying all that is conservative and espousing what he called a Third Way alternative to traditional socialism and capitalism, all he’d done was resurrect campus politics from the period between the two world wars.

The 20 years between the first and second world wars was a hotbed of intriguing, innovative political activity. The works of Karl Marx, Engels, Vogt and Nietzche were highly fashionable with both academia and the intelligentsia throughout Europe. Russia’s experiment with pure communism, introduced in 1917, had collapsed disastrously by 1921. The tenth party congress in March 1921 proclaimed the abandonment of pure communism and the adoption of the New Economic Policy, restoring a mix of state socialism, state capitalism and private capitalism. This boosted agriculture and industry by 1926 back to pre-war standards. By 1928, the private owners of land and business were harried out of existence, and the state took full control of the economy.

The Union of Soviet Socialist Republics was well established by 1935. It was in the 1930s that Russia aggressively penetrated the academic institutions of the West, recruiting young graduates and undergraduates from Western universities to train as spies for the USSR. Oxford and Cambridge universities became prime grounds for this recruitment drive. This was later to make headlines in the 1950s with the defection of Guy Burgess and Donald MacLean from Britain to Russia, followed by the famous Kim Philby defection in 1963.

Parallel with the popularizing of socialism through communist ideology in the 1920s and ’30s, a different form of socialism arose—national socialism, or fascism. Touted as a Third Position, or Third Way, between conventional capitalism and communism, it was akin to a scavenger: It appealed to both left and right and clouded the distinction between the two. The late G.L. Mosse, formerly a history professor at the University of Wisconsin, described fascism as scooping up “scraps of romanticism, liberalism, the new technology and even socialism…. The tree became the favorite symbol” (Masses and Man). Thus we see Third Wayers embracing anything from technological change to the greening of the environment.

But between the wars, fundamental to the fascist movement and supporters of this Third Way was the revolutionary tendency to create a new world order which offered broad appeal to all classes of people, from the plebeian to the aristocrat. Professor Mosse, a foremost distinguished expert on Nazism and fascism, observing the 21st century appeal the Third Way has in Western politics, declares, “Those ideals of mass politics upon which fascism built its political style are very much alive, ready to absorb and exploit the appropriate myths. The danger of some kind of authoritarianism is always present” (ibid.).

The paradox is that though they are essentially anti-conservative, fascist or Third Way groups are willing to undertake temporary alliances with those of the right who may be used to serve their cause. Hitler’s use of the industrial cartels in his mad Nazi drive toward a thousand-year Reich is a clear example of this phenomenon.

Tony Blair is Britain’s prime proponent of Third Way politics. His aggressively anti-conservative speech to the party faithful at the labor convention in Brighton last year is a clear testimony to the anti-conservative stance of Third Way activists. His wooing of British business is typical of the Third Wayers’ tendency to draw in the right where they perceive that it will add to their mutual profits.

Fascism clouds the distinction between party lines, hence the confusion in Tory Party circles on continuing or increasing Britain’s involvement in the European Union, which is founded upon fascist principles.

Stanley A. Payne, also a professor of history at the University of Wisconsin, has established that part of the ideology and goals of fascism involves “the attempt to realize a new form of modern, self-determined, secular culture” (Fascism: Comparison and Definition). This brings to mind Mr. Voigt’s comment at the recent Berlin Third Way conference, that the discussion centered on “how society should change.”

What most of the world is clearly failing to see is glaringly obvious to real students of history. The federating power of that international entity which will soon steamroll the United States into second place on the economic and geopolitical scene, the European Union, is founded upon Third Way, fascist principles!

One of the most rabid proponents of the “European idea,” of the need for “European law” (as opposed to ancient British common law), and the vision that a new version of the state and of empire would emerge from the symbiotic relationship between Rome and Berlin, was Julius Evola. The darling of postwar neo-fascists, Evola was campaigning for European union through his published essays in the midst of World War ii, in 1940 and 1941. Following the war he continued to aggressively “campaign for a Europe united not on Western (that is, American) premises, but on those of the ‘eternal’ spiritual values of ‘the Tradition’”! (Roger Griffin, Fascism, p. 343).

Mr. Griffin points out that Evola’s essays have become classics for the current wave of Third Way followers. In an essay titled “United Europe:The Spiritual Prerequisite,” published in the foremost periodical of the new right in Britain, Scorpion, Evola declares that the concept of nationhood (and therefore sovereignty) is not appropriate when talking of a uniting Europe. He goes on to endorse this apocalyptic vision: “The notion of European unity is spiritual and supranational…. The European Imperium [Empire] will belong to a higher order than the parts which compose it…. Europe must not be a stage towards the westernization of the world but a move against it, in fact a revolt against the modern world in favor of what is nobler, higher, more truly human.”

Why do we say this is an apocalyptic vision? Read on!

We quote here from a pamphlet of Group Union Defense, a fascist student movement in France. Linked with Troisíeme Voice (Third Way), another ultra-right group, this movement espouses the destruction of all that is Anglo-Saxon and “the establishment of a specifically European military defense system [since last year, a declared goal of the EU]. This involves the destruction ofnato and the definitive withdrawal of American bases in Europe” (Letter 52, “Pour un Syndicalisme Autogestionnaire,” Paris, 1988).

But the real clincher, that which most clearly espouses the apocalyptic dream of a new Holy Roman Empire, comes from the British-based English Nationalist Movement: “The rekindling of that Spirit which made Europe breathtaking can only come through the rekindling of sacrifice and struggle. It will not come from votes and elections, nor will it come from debates about the standard of living. It will only come when the New Man, who will build the New Ethos, is forged and tempered in the fire of love generated by our fanatical devotion to our Holy Cause” (Fascism, p. 360).

Perhaps the Communist penetration of Britain’s security and secret intelligence services in the 1930s and throughout the cold war period proved often disastrous to Britain’s and, to a certain extent, America’s conduct of the cold war. But the penetration of Europe, and Britain in particular, by the post-cold-war Third Way militants, with their ideology recently endorsed by 14 world leaders including the U.S. president, is a harbinger of disaster on a more massive scale! A disaster that will consummate in hot war! Your Bible says so!

Read it in the words of the Apostle John who, inspired of God’s Holy Spirit, looked on down through the ages to see the consummation of the Third Way, in graphic detail, occurring in the “latter days.” What John saw was the realization of the dreams of Third-Way visionaries such as Julius Evola. He saw the spiritual, supranational nature of that which the Third Way is leading us toward.

In Revelation 17, John depicts a great spiritual entity as a fallen woman (vv. 1-6) riding upon (i.e. dominating by her spiritual influence) a great beast (vv. 3, 6-8), symbolic of a great imperial power (vv. 9-13). Yes! The overriding influence on that great, short-lived, globally dominant government which your Bible says will rule on this Earth just before Jesus Christ returns is spiritual—the spiritual dominating the supranational!

But when John’s great vision is matched with the parallel vision of the Prophet Daniel in Daniel 2:32-44, we see the hybrid mix of Third Way, fascist power depicted as a weakened blending of iron and miry clay.

Then comes the good news as the greatest of all spiritual powers intervenes and smashes that fascist empire (Dan. 2:41-44) and establishes a government which overrides the supranational—the universal government of Jesus Christ (Rev. 17:14).

You need to capture this vision in your mind. It offers you the hope beyond the Third Way. Request our free booklet Daniel—Revelation and War, and prepare now for the rule of that ultimate way, the way of the law and the government of the supreme Creator, which alone can guarantee a time of global peace in a new world order without end!