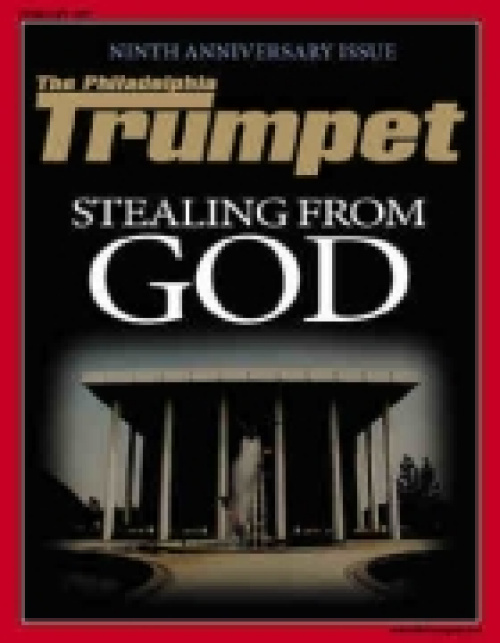 The year began with a smooth start for the long-anticipated European common currency as the world began playing with its new toy. In what traders called a relatively quiet day for the world’s $1.5 trillion-a-day foreign-exchange markets, the euro began its first official transactions in Asia on January 5 in the trading range of $1.179 to $1.182 per euro. It is interesting that the ratio is stated as so many dollars per euro instead of vice versa, thus making the euro appear as the standard by which currencies are evaluated. From its outset, it appears the euro is destined to dominate the dollar.

The Wall Street Journal (WSJ) of January 5 quotes Rebecca Patterson, a London-based currency strategist, as saying, “While the global economy is expected to slow further in 1999, we expect one of the larger downward revisions in growth to occur in the U.S.” The article continues, “Two other factors weighing on the dollar will be a contraction in Latin American economies, especially Brazil, which Ms. Patterson said should ‘negatively affect U.S. economic strength,’ and the U.S.’s huge current-account [trade] deficit, which stands at more than $200 billion.

“Mr. Kit Juckes at NatWest Global Financial Markets also sees the euro climbing to $1.25 to $1.30 in six months. But he said the dollar had ‘a reasonable chance of getting to as low as 105 yen [down from 143 yen to the dollar as recently as August 28,1998],’ but that such a strong yen was unsustainable.

“Noting the dollar’s fall against many currencies, [a California-based broker] said, ‘I think [the dollar] could fall another 20 percent.’”

As mentioned above, a major threat to the U.S. is an economic contraction in Brazil, the world’s ninth-largest economy, which just experienced a devastating currency devaluation on January 13. This re-emergence and continuation of the global financial crisis which started 18 months ago in Thailand will hammer Brazil and other Latin American countries from Argentina to Mexico with scarcer capital from foreign investors, higher interest rates and lower or even negative growth.

How much devastation the Brazilian currency devaluation will wreak remains to be seen. Economists now expect the whole region to tip into recession in 1999, sending shock waves into other global economies, especially America. Brazil is the biggest economy in Latin America and America’s 11th-largest export market. Also, U.S. banks have a loan exposure of $18.6 billion. With U.S. manufacturers already struggling due to a severe drop-off in exports to Asia, the loss of Latin American markets, which with Mexcio comprise 20 percent of U.S. exports, makes America especially vulnerable to a rising competitor which is little understood by the world.

When coupled with world news, Bible prophecy makes it clear that America will be driven into the dust by a German-led politico-religious conglomerate of nations which dominates world markets to briefly become the economic and trade center of the earth (see Rev. 13:15-17; 18:3, 11-19). To understand the identities of nations in the Bible, please request your free copy of The United States and Britain in Prophecy by the late Herbert W. Armstrong.

Because of America’s declining morality, graphically illustrated by the sins of its leaders, an unrepentant America is being punished by the great God as the world turns its back on its formerly great but now arrogantly wicked lover (Jer. 30:12-15; Ezek. 7:1-10; 16:35-39).

It is vitally important that we see behind the record-setting U.S. bubble stock market with all the hype and hoopla created to keep American consumer confidence up so that mindlessly materialistic and frenzied spending continues to prop up the failing world economy. Or, as it is written in the Financial Times of last December 23, “Blessed then are the spendthrifts for they will save the earth.”

If we sharpen our focus to peer beneath the shiny surface (Matt. 23:27), we see a world being squeezed by deflation, with global collapse in demand for goods and services compounded by sales prices falling below the cost of producing them. Widespread financial collapse and corporate and personal bankruptcies are rising as nations, companies and individuals grasp at financial straws trying to stave off the pall of poverty which has already spread over half of the world. Deflation is here. The question now is, can global depression be far behind?

A major key to understanding the direction of the global economy is seen in Japan. Some analysts expect the Japanese Nikkei stock index to plunge below its 1998 low of 12,880 to the crushing level of 10,000 or less during 1999. Japan appears unable to stop its decade-long economic fall. Major economies in irreversible decline are exactly what caused the Great Depression of the 1930s. If Japan falls, America and the world will fall with it.

The WSJ of September 10, 1998, explains Japan’s dilemma by saying, “When a country suffers from recession, a common treatment involves cutting official interest rates in hopes of spurring greater borrowing, investment and consumption. That’s what the Bank of Japan tried yesterday.

“But sometimes, a nation’s economy and financial system are so sick that conventional links between monetary policy and economic activity are damaged. Many economists think Japan is in just such a shape now…[and] think Japan has now fallen into a ‘liquidity trap,’ a bind no major economy has seen since the 1930s. In that state, interest rates hover near zero, but demand remains stagnant. There is no room to cut rates more.”

The January/February issue of Foreign Affairs put it this way: “After its ‘bubble economy’ burst in 1991, Japanese authorities were at first reluctant to cut interest rates for fear of reinflating the bubble. Since 1996, however, short-term rates have been well under one percent and have now slipped to a quarter of one percent. Yet these extremely low rates were unable to prevent a slide into recession, let alone reverse the stagnation that has plagued the Japanese economy since 1992. Since few economists believe that shaving the last few decimal points off interest rates would make any significant difference, Japan really is caught in a classic liquidity trap, where zero is not low enough….

“But ten or even five years ago, few economists would have taken seriously the possibility that Japan could be in its present predicament, and thus the emergence of liquidity traps elsewhere is no longer inconceivable.

“Indeed, in the early 1990s some economists worried that the United States might be approaching liquidity-trap territory. The recession of 1990-91, brought on by a slump in consumer spending together with financial difficulties in the banking sector, was relatively mild but hard to turn around. In order to engineer a recovery, the Federal Reserve had to cut the benchmark federal funds rate to 3 percent—more than 6 percentage points below its 1989 peak. Right now…the Fed’s base rate in the United States is only 4.75 percent, while the corresponding rate in Europe is only 3 percent. In other words, an interest rate reduction on the same scale is literally impossible. Nor are economic shocks that would require large interest rate cuts hard to envisage…last autumn the United States experienced a completely unexpected panic that briefly caused much of the nation’s financial mechanism to seize up and had many normally optimistic observers suddenly talking about unavoidable recession…. Fed officials have the sense that they narrowly dodged a bullet, and that the sniper may still be out there…. Whereas two years ago it seemed inconceivable that other advanced nations could find themselves in such a liquidity trap, that kind of crisis now seems entirely conceivable—and Japan’s experience shows how hard it can be, once in such a trap, to get out again.”

According to Bible prophecy, America and Europe will be on an economic seesaw, with America going down and Europe going up. With the full view provided by combining news and prophecy, it is America which is in grave danger of an unstoppable fall over the precipice of financial ruin. Therefore, the question stands: Is 1999 the turning point for America’s, and ultimately the world’s, economy?