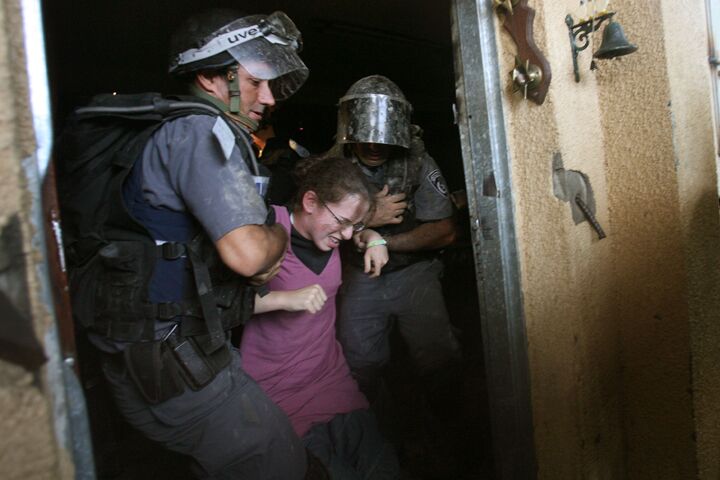 An ominous sign for Prime Minister Olmert’s planned handover of the West Bank.

A conflict in Hebron has revealed deep-seated ideological differences between the Israeli government and some of its religious-minded military personnel. The Israeli-on-Israeli violence gives an ominous forecast of things to come in future desettlements.

Israeli security personnel dragged more than 200 Jewish settlers out of houses in the central marketplace in Hebron on Tuesday. In the incident, 12 soldiers, including two squad commanders, refused to participate and were consequently removed from their combat units and jailed for 28 days.

Hebron contains a site where some believe the patriarchs Abraham, Isaac, Jacob and three of their wives are buried. Both Jews and Muslims consider the site holy. Israel controls the holy site, and the Palestinians control the rest of the city.

Israel evacuated 80 percent of Hebron in 1997 in a failed attempt at land for peace. That move left the Old City as the only remaining area with Jews; there about 500 Jewish settlers living under heavy guard in the middle of 170,000 Palestinians.

The families living in the marketplace claimed, “This land was given to us by the owners, the owners of this land, belonging to the ancient Jewish community of Hebron. They gave us permission, they gave us the deeds and the documents, and they asked us to come here to renew the Jewish community, and this is what we’ll do in the future.”

But the Israeli Supreme Court ruled against them, and on Tuesday about 3,000 security personnel arrived to remove the settlers, who threw rocks, eggs, concrete powder, water and paint. Some had barricaded themselves inside buildings. In the ensuing clash, 14 officers and 12 settlers were injured.

The Israeli government’s stance on illegal settlements and structures has been heavily biased in favor of Arab residents. The Arab populace regularly erects illegal structures on land they do not own. One senior Palestinian official said that, of more than 6,000 homes built without permits in recent years, Israel demolished fewer than 200 of them. Most of the illegal structures demolished in past years have been in the Jewish sector.

The government has shown little interest in the problem with illegal Palestinian structures. The enforcement of law in Israel clearly favors Palestinians over Jews, and many of its citizens are fed up.

The father of one of the soldiers said he forbade his son to carry out the order: “My son was trained to fight enemies, to wait in ambushes, to sharpshoot. He was not trained to expel his brothers from their homes.”

Originally, about 40 soldiers threatened to refuse the order to remove the settlers. Just two weeks ago, the chief rabbi of Hebron-Kiryat Arba, Dov Lior, unequivocally ordered the soldiers not to help evacuate Jewish settlers from another community: “Military activities aimed at preventing Jewish settlement go against the teaching of our holy Torah. … Every human being who cares about the Jewish people and the land of Israel is commanded not to take part in these activities.”

A spokesman for the Council of Yesha Rabbis said that instruction applied here as well. The Jerusalem Post called the soldiers’ refusal to participate “the largest act of military insubordination since 2005’s disengagement from the Gaza Strip” (August 6).

On Monday, Prime Minister Ehud Olmert met with Palestinian President Mahmoud Abbas to work out his plan to hand the West Bank over to the Palestinians. Because the Israelis can’t evacuate a few hundred settlers from Hebron without an eruption of violence, Major General Shamni is concerned about the stability of those future plans. “If such a large number refuse orders over the Hebron marketplace, then we can only imagine what it will be like during a larger-scale evacuation,” one senior official said.

The head of a religious pre-military academy told the Jerusalem Post that “if the government were to try disengagement today [as in Gaza], there would be mass insubordination that would totally paralyze the idf.” Prime Minister Olmert may find out how true that statement is as he proceeds with his plans for the West Bank.

Trumpet editor in chief Gerald Flurry has called the so-called peace process a “wound” for Israel. Land for peace has been a deadly delusion for the Israelis, causing the Jewish government to give up land and resources even while terrorism continues to escalate. The government’s desperation for peace is so great that it would rather oppose its own people in its own ancient cities than those squatting illegally on its land.

For more information about where this wound will lead, read Jerusalem in Prophecy.