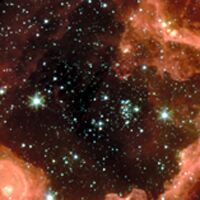 After decades of finding that space is devoid of life, science believes it may have found the answer: redefine “life.”

Scientists often mock the religious for believing an all-powerful God created the physical universe. As its alternative, science gives us the evolutionary theory. Much like the religious, scientists claim the evidence of their belief is all around us. But one of the major questions science has never answered is this: Why hasn’t man found life in space?

A team from the California Institute of Technology using the Keck telescope in Hawaii claims to have found the most distant, aged galaxies ever seen by man. Astronomer Richard Ellis says these are “the early generation of stars switched on when the universe was in its infancy.” Surely if life springs forth as a result of evolution, we would see it developing somewhere else in the universe in addition to our rather tiny planet. Yet, despite the billions spent on deep space telescopes, manned missions to space, probes to Mars—and despite seeing galaxies farther away than anyone thought possible—no one has found even a blade of grass, much less sentient life.

The National Academies of Science have come up with an answer: redefine the word life. In a new report, the organization gives the following criteria for life as an alternative to nasa’s current expectations:

If these criteria are all scientists require, they have already found proper conditions for life in space. For instance, according to the report’s authors, most places in the universe have some sort of thermodynamic disequilibrium, and many have liquids—just not water. Water is, of course, the only substance known to support living organisms.

The report then divides life into two categories: “earth-like life” and “weird life.” After all, scientists know that if they are going to claim living organisms could develop in conditions completely foreign to Earth, the result might be somewhat different too. The report asserts that “nothing would be more tragic in the American exploration of space than to encounter alien life without recognizing it.”

The lead scientist for nasa’s Mars exploration program responded to the report, saying, “It’s going to help us a lot to make sure we go exploring with our eyes wide open.”

Now that nasa has new criteria available for its use, here’s a new headline they might release: “New Definition For Alien Life Set—Still No Life Found.”

Allan Bloom’s 1987 comment in The Closing of the American Mind comes to mind: “The only common project engaging the youthful imagination is the exploration of space, which everyone knows to be empty.” So why make such a profound push to find life in space? Because the evolutionary theory depends on it. If life really evolves, the evolution of life in space would be scientifically equivalent to the coming of the Messiah. Scientists hold their beliefs about the origins of life on faith—and the emptiness of space proves it.

Instead of redefining life in a pathetic attempt to plug holes in the evolutionary dogma, we should ask instead why space is devoid of life. Like scientists, most religious teachers offer no reasonable answers as to why God created an entire universe filled with stars, planets, black holes, comets and nebulae—and then left it vacant except for a single planet in the Milky Way. But there is a definitive answer.