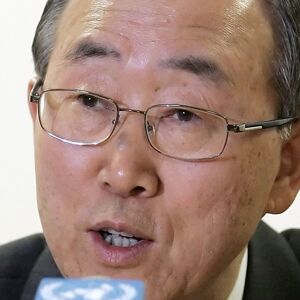 At the most dangerous moment in history, the G-8 confronts global warming—and the UN secretary general identifies greenhouse gasses as a cause for war.

One fifth of the world lives on less than $1 a day; 1.2 billion do not have access to safe, drinkable water; and every year, 2.2 million die from disease brought on by contaminated water. A clash of civilizations is developing between Islam and the West. On a less life-threatening but still troubling note, 876 million people are illiterate.

So when the eight most powerful nations on the face of the planet got together earlier this month to combat our most pressing problems, what was the primary issue on the agenda? Carbon emissions. Maybe Al Gore won the U.S. presidential election after all. The fruit of the Group of Eight meeting: an agreement to reduce greenhouse gases by 50 percent by 2050, the methods by which to be negotiated via the United Nations.

The global warming issue has taken hold of the world’s leaders, who seem to believe there is no room for debate on the cause of climate change.

After the G-8 summit, UN Secretary General Ban Ki-moon offered his commentary with an article titled “A Climate Culprit In Darfur” in the Washington Post. Ki-moon insists the slaughter in Darfur isn’t just an ethnic conflict: It was also brought on by climate change. Presumably, if we turn down the heat, peace will break out all over. It appears the secretary general is defending the G-8’s decision for the UN to act as prosecutor against greenhouse gases by implying that reduced emissions will stop the “scourge of war,” the mandate on which the UN was originally founded.

There is a weather crisis in Darfur: Rainfall has diminished 40 percent over the last 20 years. There is less arable land as a result. But despite the secretary general’s assertion, there is no proven link between this dramatic decline in rainfall and human-caused global warming; no one has conclusively shown that carbon emissions are responsible for worsening weather conditions—not the United Nations, not Al Gore, and certainly not the G-8.

According to Christopher Monckton, respected scientist and one-time adviser to Margaret Thatcher, even if every Western country complied with the Kyoto protocol, in one century, the global temperature would drop just 1/25 of one degree. Even the average temperature statistics used by the UN’s Intergovernmental Panel on Climate Change show no increase in ground-based temperature since 1998, despite an increase in carbon emissions. The war on global warming is far more political than scientific. For more proof of that, read “The Politics of Global Warming.”

Europe (you remember, the countries that actually signed Kyoto) has not complied with the tenets of Kyoto in any case. Here’s a little-reported fact: From 2000 to 2004, U.S. carbon emissions dropped 8 percent while Europe’s went up 2.3 percent. So much for Kyoto.

Instead of swinging President Bush around to the tenets of Kyoto, the latest document on climate change from the G-8 looks far more like President Bush’s original plan, as Wall Street Journal columnist Kimberley Strassel observed. Rather than setting mandatory targets like Kyoto did, it sets a global goal of cutting emissions by 2050. It says that “technology is a key to mastering climate change.” But though the world’s approach may have improved from the White House’s perspective, the fact remains that far more important issues have taken a backseat to unproven pseudo-science politics.

Both the G-8 and the UN are promoting ideology over fact. Secretary General Ki-moon has taken it a step further, blaming greenhouse gases for ethnic cleansing. The argument is transparently disingenuous.

The weather crisis, though, is real—and it has a cause. Though humans may be able to effect a miniscule change in the climate, we don’t control the weather and we never have. Almighty God does. There are undoubtedly those who find the assertion that sin could cause weather crises ridiculous—perhaps the same people who find man-made global warming as a cause for Darfur to be a reasonable proposition.

But the Bible prophesies of weather disasters in the end time, not because of greenhouse gas emissions but because God uses catastrophe to punish for sin (e.g. Revelation 6:5-8; 8:4-12). In that sense, man is responsible for catastrophic weather (e.g. 2 Chronicles 6:26). If we take God at His word, that is the cause of our weather crisis—and repentance for those sins is the cure.