A stealth battlefront in the “war on terror” 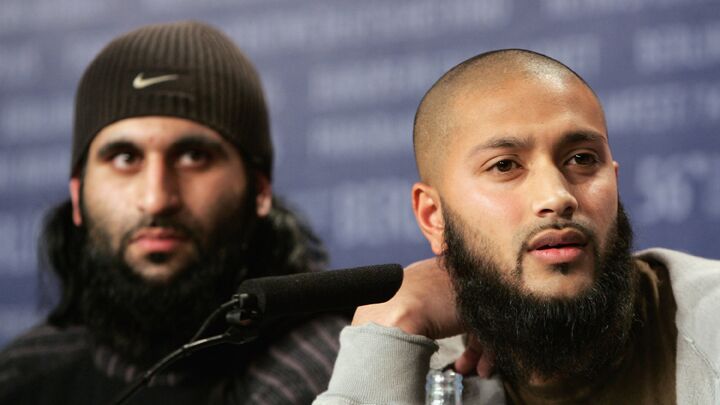 A stealth battlefront in the “war on terror”

America’s “war on terror” is actually a war against some very inventive, if ruthless, individuals. Though outmatched by American might in every sense, clever Islamists are leveling the battlefield by turning our strengths into liabilities. Commercial jetliners, for example, make for devastatingly effective guided missiles.

One weapon Islamists are using against us is American lawyers.

The Rise of “Lawfare”

“Lawfare” is a recently coined term denoting efforts to achieve military objectives through legal maneuvers. It is proving to be a helpful tool for Islamists, who have used it to intimidate the American military into softening its battle tactics, to shut down terrorist surveillance programs, to access secret information on counterterrorist measures, to secure extra rights and even gain freedom for captured terrorists, and to swing American and global public opinion against the United States. These successes jeopardize American lives and handicap the nation’s war-making capabilities.

Lawfare practitioners do not act alone. They hire whole colonies of Lilliputian lawyers to tie Gulliver—the U.S. Armed Forces—to the ground. They rely on the active help of self-righteous civil rights groups such as the American Civil Liberties Union (aclu), the Center for Constitutional Rights (ccr), and the Council on American-Islamic Relations (cair). And giving their litigious efforts greater traction with the public is the artificial amplification provided courtesy of the newsmedia, which are eager to publicize any allegations of government or military wrongdoing while ignoring the big picture.

A peek at just how calculated the effort is came when British authorities seized an al Qaeda training manual instructing operatives, if captured, to falsely claim torture and other abuses. This tactic has worked especially well at Guantanamo Bay; detainees’ accusations have turned the prison into a lightning rod for public criticism over human-rights violations and generated countless demands for its closure.

U.S. federal courts are choked with lawsuits from Taliban and al Qaeda prisoners. The Wall Street Journal reports, “The suits range from habeas corpus petitions to free captured enemy combatants [such suits were dismissed by the Court of Appeals in Washington, d.c., on February 20 in its ruling on Boumediene v. Bush—though the case is being appealed to the Supreme Court], to tort suits seeking monies from U.S. government officials, to challenges regarding the detainees’ conditions of confinement. … Several suits [also] seek to hold the U.S. liable for the alleged misconduct of other governments”—such as torturing individuals whom the U.S. has deported (February 23).

Via several separate cases, lawyers have aggressively worked to secure the right of captured foreign combatants to petition federal courts for freedom. Misguided activists behave as though the rights given to U.S. citizens under the Constitution extend by natural-born right even to foreigners engaged in terrorism against the U.S. After spending considerable time on trial at all levels, up to the Supreme Court, the issue has met with some measure of success. (Most notably, in the 2004 Rasul v. Bush case, the Supreme Court found that appeals by prisoners at Guantanamo over wrongful imprisonment fell under the jurisdiction not of the U.S. military but of U.S. criminal courts.) That such efforts could put dangerous people back into business is evidenced by the fact that 1 in 20 terrorism suspects the U.S. government has released has later been found engaging in terrorist activity, according to military analyst James Dunnigan. It appears that some American lawyers are prioritizing invented “rights” of dangerous enemies over the lives of American citizens.

Trying terrorists and foreign combatants in U.S. criminal courts comes with genuine security risks. For one, there is a potential that, in the discovery process of a legal proceeding, in which each side must turn over information to the other, the enemy will learn how the U.S. gains its intelligence to prevent attacks. This occurred in 1995, during the trial of an Egyptian jihadist, when the U.S. handed over a list of names to the defendant’s lawyers that eventually fell into the hands of al Qaeda’s leaders, tipping them off to what Washington knew about them.

But the implications of extending the jurisdiction of civilian courts over military matters—in effect blurring the line between military law and criminal law—are even more far-reaching and ridiculous. Jeff Breinholt, deputy chief of the U.S. Department of Justice Counterterrorism Section, gives one example: “[T]he U.S. military could, under established rules in the Law of Armed Conflict, legally bomb a building, but then legally be prohibited, based on the Fourth Amendment, from searching the same building without a warrant” (FindLaw.com, March 9).

While this would never happen, it illustrates the flaw in allowing enemies to call on the judicial branch of the U.S. government for help in a war being waged by the executive and legislative branches.

In trying to handicap U.S. anti-terrorism efforts, these groups have also attacked technological intelligence gathering. In the most well-known example, the aclu, ccr and cair filed suit against the National Security Agency for listening in on phone conversations of al Qaeda suspects on American soil. With the help of the New York Times, the lawsuit attracted public outrage over the program; meanwhile, terrorists, having learned of their vulnerability, switched to using disposable cell phones that were beyond the listening ear of the U.S. government.

In the end, lawfare is meant to spook military leaders and soldiers into hypersensitivity over the legalities of each word and step; as they modify their actions to avoid being slapped with war-crimes charges, they lose effectiveness as a fighting force.

Bruce Anderson explained in the Spectator that soldiers “have to make instant life-and-death decisions. In the nature of human decision-making, not all of them will be the right ones. But if this means that lawyers thousands of miles away can spend many hours reviewing a decision which a soldier had to take in a fraction of a second, two consequences will ensue. Fine young men will be subjected to injustice. Worse still, the entire process of military decision-making will be degraded. At a moment when the soldier’s mind should be focused exclusively on operational requirements and the safety of his comrades, he cannot be expected to ask himself how the lawyers might second-guess him. If he does, he will cease to be a good soldier” (July 23, 2005). Just as the enemy wants.

It is not difficult to imagine how vulnerability to prosecution would undermine the confidence and readiness, not to mention morale, of a fighting force. Today’s military is already saturated with examples of political correctness trumping security concerns. As the Wall Street Journal said, the goal of lawfare seems to be nothing less than the “criminalization of traditional warfare” (op. cit.).

Of course the military must operate under the rule of law. But it is of necessity a different law than that which applies to the rest of the us. As one British general put it, “Soldiers are not merely civilians in uniform. They form a distinctive group within our society, which is required either to kill other human beings or … to sacrifice themselves for the nation.” Thus soldiers, operating under military law, face punishment and/or protection from military officers who are trained to review and judge actions within the appropriate context. Civilian courts, by accepting certain cases and ruling in ways that blur these lines, risk being used and exploited by enemies of the nation for nefarious purposes.

The fact that these Islamist abuses of the American judiciary are as successful as they are exposes some tremendous flaws in our system. The American judiciary has become a paperwork factory, a protocol mill that entangles us in a web of processes that provide only a caricature of real justice. Our pursuit of impartiality has effectively outlawed common sense.

“No One Goes to Law Honestly”

The logic in Proverbs 18:5 is basic, but it is largely ignored: “It is wrong for a judge to favor the wicked and condemn the innocent” (The Living Bible). A truly functional system could not be hijacked by enemies of the state; real justice would never take a backseat to criminal rights, real or imagined. For example, in the system of Mosaic law, in which much of American law finds its roots, is the simple but wise dictum, “Keep thee far from a false matter …” (Exodus 23:7)—a law that, if kept in a spirit of fair and sound judgment, would instantly unclog the judicial logjam that results from having to treat every trumped-up lawsuit with equal seriousness.

Even now, wise, authoritative judges can still shut down foolish lawyers and activists who seek to misuse the system. But as the Prophet Isaiah foretold of our modern world, such judges are disappearing (Isaiah 3:1-2). As a result, base individuals behave themselves proudly against the honorable (verse 5). Another of Isaiah’s end-time prophecies reads, “No one enters suit justly, no one goes to law honestly; they rely on empty pleas, they speak lies, they conceive mischief and bring forth iniquity” (Isaiah 59:4, Revised Standard Version).

Though a blizzard of accusations has been leveled against the U.S. over all aspects of the execution of its “war on terror,” all but a few have been proven false. By several measures, no military in history has worked harder in a time of war to protect civilians and mete out violence with such precision. Still, in the virulently anti-American environment of today, even false accusations, pumped through the megaphone of the media, serve to prejudice the American public and tip the scales against the U.S. in the court of world opinion.

Lawfare provides a microcosmic look at the nature of our time: The strong, under curses from God, are becoming weak; and the weak, strong.