Is this huckster hurting you and your family? 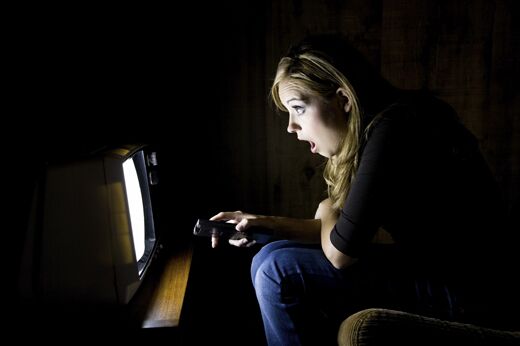 Is this huckster hurting you and your family?

“If you came home and you found a strange man … teaching your kids to punch each other, or trying to sell them all kinds of products, you’d kick him right out of the house,” said Dr. Jerome Singer of Yale University.

“But here you are; you come in and the television is on; and you don’t think twice about it.” A wise observation.

Do you control the television in your home? Or does it control you?

The average American adult spends over 1,700 hours a year gazing at it (compared to only 110 hours spent reading books). According to Dale and Karen Mason, authors of How to Get the Best Out oftv, millions of Americans are so addicted to tv that they meet the criteria for “substance abuse” in the official psychiatric manual.

Statistically, a young person turning 18 will have whiled away more hours with this “stranger” than doing anything else except sleeping. Six of 10 children watch it without supervision; 4 of 10 keep one of these influential aliens in their bedroom.

It is a fair question—in fact, we would be criminally negligent if we failed to ask it: What is all thistvdoing to us?

Firstly, the hours devoted to television can never be reclaimed for something productive—working, exercising, studying, reading, communicating with actual people. And it’s not the most refreshing diversion: After an hour or two of television, people tend to be cranky, irritable and tired. Research shows that people “don’t respect themselves for watching television, don’t enjoy it much, and by and large wish they would quit” (ibid.). Does that describe you?

Children who watch a lot of tv show a reduced capacity for creative imagination, concentration and delayed gratification. Thanks to the images on the tube changing on average every four seconds, their attention spans shrivel and their reading becomes lazy; they exhibit deficiencies characteristic of learning-disabled children. Similar patterns emerge in adults.

And all that doesn’t even take into account the content of the shows on tv. As Jim Henson said, “Television is … teaching—whether you want it to or not.” But what is it teaching us? What is it teaching our children? We can’t afford not to think seriously about these questions.

None of us can watch without picking up ideas, values and patterns of behavior from the small screen. It shapes our sense of what’s normal, what’s funny, what’s beautiful, what’s cool—what’s right, what’s wrong.

Even children’s programming is loaded with depressing and wrong messages (not to mention the fact that 10 ½ minutes of every hour are devoted to advertisements for things they don’t need or that could be bad for them). But then again, only 14 percent of the networks’ schedules are devoted to kid’s shows—so young people often end up watching adult programs that can feature violence, drunkenness, sexual promiscuity and other evils. In effect, our children are “eavesdropping” on the adult world, picking up lies and faulty behavior as they go.

Take one example: tv’s horribly distorted and decidedly unhealthy picture of sexuality. In addition to its prevalence—with over 65,000 references to sexual behavior on American television each year—broadcast sex is unrealistic: It happens five times more often between unmarried couples than between married; the second-most commonly depicted sexual experience is with prostitutes; homosexuality is pervasive; and consequences of sex such as pregnancy, disease, and disrupted relationships are almost never shown.

In short, immorality is made to look normal, with few or no kickbacks.

Another of this stranger’s primary messages is materialism. Among heavy tv users, the feeling is strong that certain material goods are necessities, whereas light tv users usually consider the same goods luxuries. Thus, television can breed into us a dissatisfaction with what we have—no matter how lavish. Is it any wonder we’re so saddled with personal debt?

One of the most commonly televised messages is that authority is evil. Anti-government messages simply saturate television: from the sitcom families with boyish, bumbling husbands incapable of leading to the “watchdog” news media that operate on the foundational premise that we’ve got to keep a wary eye on these no-good rich and powerful politicians and businessmen. And we wonder why “kids these days” have no respect?

Other common messages on television, pinpointed by media researcher Dr. Robert Kubey, include: For everything there is a quick fix; young is better; open and unfilled time is not desirable—in fact it cannot be tolerated; violence is acceptable; and religion is unacceptable. Michael and Diane Medved’s book Saving Childhood shows how tv additionally “bombards [us] with messages encouraging impatience, self-pity, insecurity and pessimism.” Then there is the persistent foul language and gross humor, the course communication and shameless disrespect, the shallowness and lies mandated by political correctness. Add to these the ways that television trains us to root for the bad guy, to smile at lawbreaking—to cuddle comfortably with compromise as a way of life.

What would we do if we caught a schoolteacher trying to feed these concepts to our children?

I know—it’s terrible isn’t it? many silently respond. I can’t believe they show that stuff. Yet so many of us keep watching, convinced we can “handle it” while it gradually, incessantly, inescapably sculpts and shapes the way we think, the way our children think, how we behave.

Ephesians 2:2 calls Satan “the prince of the power of the air.” Herbert Armstrong explained that this verse is referring to the devil’s broadcasting in attitudes of “self-centeredness, lust, greed, vanity, jealousy, envy, resentment, competition, strife, bitterness and hate.” Considering the pervasiveness of tv and much of its content, we can also see how much power that prince possesses over what is broadcast through the airwaves, which also finds its way into our minds—hour by hour, by week, by month, by year, by generation. What we see on television isn’t called “programming” for nothing.

That’s not to say there are no positives to television. There are educational programs. It can be relaxing—even bonding—if used judiciously, with genuine moderation.

But the danger is that we grow comfortable with televised sin, after a lifetime of programming. This is an area of family life we cannot be careless about. Don’t let this stranger into your home unchecked. Keep a close eye on him; limit his influence; don’t let your kids spend time with him alone; scrutinize how he affects you and your family.

And if you need to, kick him out!