This event demonstrated that in times of extreme violence and crisis, strong leadership, strong families, and a strong moral fiber are necessary. 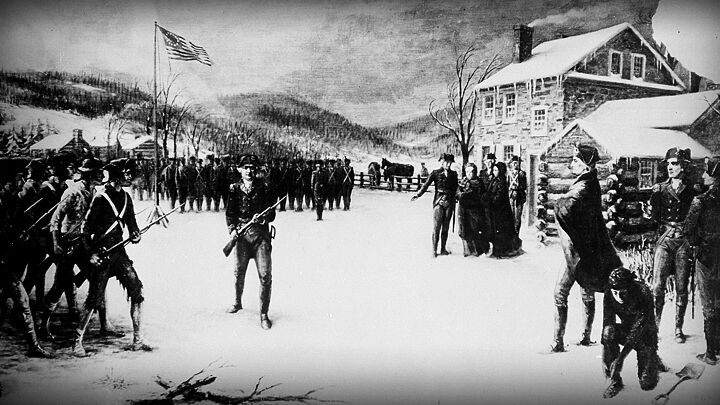 This event demonstrated that in times of extreme violence and crisis, strong leadership, strong families, and a strong moral fiber are necessary.

The year 1759 was heralded as a banner year for Britain. “In no one year since she was a nation has she been favored with so many successes, both by sea and by land, and in every quarter of the globe” (Annual Register—1759). Trade was flourishing, production soaring: As the idolized Englishman William Pitt had forecast, war had brought enormous wealth.

But it was not to last. In the final battle of the French and Indian War, the army of British General James Wolfe defeated the French forces under the Marquis de Montcalm at the battle of Quebec. Both generals died of wounds received there. The Treaty of Paris was drafted proclaiming that all Canada, including Quebec, belonged to Britain. After that, things began to go terribly wrong.

The eventual clash of arms between Britain and America was inevitable. The Colonies and the mother country had been at odds over the right to rule for decades. The fact that King George III was young and unprepared to be king was certainly a factor, but in fact, much of what followed has been incorrectly placed at his door. The real culprits were his dishonest and self-serving ministers, and wars which would soon escalate with France and Spain.

British legislation was seen to be oppressive by a people who felt pinched by the homeland. The Acts of Navigation limiting American trade were openly flouted, and smuggling was an active pursuit. By royal proclamation, the king closed the wilderness west of the Alleghenies to immigration. And finally, the British government resolved to make taxation a reality for the Colonies.

Britain, of course, felt that America should pay for the 10,000 British regulars present for its defense, and the taxes only bore a small part of those costs. Americans saw the taxes as nothing but more British tyranny. So when duties on glass, lead, paint, paper and tea were imposed, it was the beginning of the end.

The spark that ignited the revolution happened in Massachusetts, on April 19, 1775, at a place now famous in American history—Lexington Green. As conflict erupted between the king’s soldiers and the colonists, the term “minuteman” was born.

America was ill-prepared for war on its own soil. It had few trained soldiers and fewer experienced officers, and of all men thoroughly unprepared to lead men into battle, George Washington was the epitome. He said, when offered the post, “I do not think myself equal to the command I am honored with.” At that moment he wasn’t. As the war developed, defeat after defeat—blunder after blunder—were to follow. But the major strengths of Washington’s character were to emerge which would later prove him to be the perfect man for the job.

By August 1776, the American army had been chased to a redoubt in Brooklyn Heights. New Jersey had been lost, resulting in an utter rout of the disillusioned troops. And now, a British fleet was anchored just outside the East River ready to provide fresh soldiers and supplies to the enemy. It was clear that a miracle was needed to save the army.

God intervened by providing not one miracle, but two.

George Washington had one major attribute: Even in the face of defeat he was calm and confident. Now, his confidence before the troops did not betray his own concerns; he had come to realize that Brooklyn could not be held. The American army clinging to that bit of unconquered soil must escape. Had the British been given any hint of that realization, the remnants of the army would have been quickly annihilated. Calm confidence in the face of crisis—that was the glue which kept the army from destruction.

Then on August 28 the first needed miracle came. The British fleet was faced with a strong contrary storm which prevented them from proceeding up the river to unload their deadly cargo. Among the colonial army huddled in the howling rain were the blue-coated, white-trousered Marbleheaders led by John Glover. Washington ordered a search for all types of small boats, and, as darkness began to descend, trench after trench was emptied of hungry and exhausted troops and placed in boats to be rowed to safety. It was a two-mile trip under extremely dangerous circumstances.

Then it was time for the second miracle. As the wind and rain had come suddenly to stop the British advance, it now, just as quickly, died, and a dense fog crept over the river. Where the water had been rough and choppy in the storm, it now lay quiet—placid and serene in the mist. The fog continued to thicken and spread as John Glover’s men propelled the boats back and forth with their precious cargo. For six hours they toiled in an operation that would not again be repeated until British soldiers were saved from the beaches of Dunkirk almost 200 years later. Glover’s boats dumped their cargo in New York and quickly made the return trip to Long Island. Even the creak of the oarlock and the occasional oath was muffled in the murky night. Not only men, but all stores and equipment were brought across to New York, leaving only a few rusty cannons behind. George Washington stood with the majestic poise of a true leader as the final men and supplies were loaded aboard. He stepped into the last boat, and the army was saved.

For America and its army, the crisis wasn’t over—it had only just begun. Those ill-fed, ill-clothed, ragged and underfed band of fighters continued to suffer small victories and major defeats until, at last, in November 1777, they turned their faces toward a winter camp—Valley Forge.

Located about 20 miles west-northwest of Philadelphia, the gentle Schuylkill River and Valley Creek joined. It was here that an old forge had been built known as the Valley Forge. George Washington is reported to have written later that the progress of the army could be followed by its bloody footprints. That Thanksgiving they had only what they could scrape from their meager packs. On the whole, many went hungry.

In a letter to governor George Clinton, Washington expressed the desperate state of his men: “For some days past, there has been little less than a famine in camp. A part of the army has been a week without any kind of flesh, and the rest for three or four days. Naked and starving as they are, we cannot enough admire the incomparable patience and fidelity of the soldiery, that they have not been ere this excited by their sufferings, to a general mutiny or dispersion.”

Of all places which might represent the struggle for ideals in the Revolutionary War, Valley Forge is the prime example. It is the story of an army’s epic struggle to survive against terrible odds—against hunger, disease and the unrelenting forces of nature.

As December came, the situation worsened. Hundreds of animals died in the cold. Soap was rare, and the filth that existed brought on a horrible itching rash. Water had to be carried in pails from the creek a mile away. Flour was also rare, and meat almost nonexistent. The drafty, damp, makeshift huts prompted infections. Putrid fever and diarrhea were common.

Some few deserted, but most stayed. To the utter astonishment of the foreign officers now camping there, the army held together. Surely, they said, no other army would have done so.

Just a few months before, Thomas Paine had written the now-famous essay “The Crisis,” in which he said, “These are the times that try men’s souls: The summer soldier and the sunshine patriot will, in this crisis, shrink from the service of his country; but he that stands it now deserves the love and thanks of man and woman. Tyranny, like hell, is not easily conquered; yet we have this consolation with us, that the harder the conflict the more glorious the triumph.”

The empty sentiment in this 20th century expressed as “America—love it or leave it!” does not reflect the kind of heroism that was seen in those times. Thomas Paine wrote about standing up for right—he spoke of a freedom from tyranny and violence! Not one of those men who were freezing and suffering—yes, and dying too—were fighting for what the nation today calls “rights.” Those men were fighting for ideals. They were fighting for a place to keep families together—a place for future generations to grow into adulthood without fear of violence.

Out of the suffering of Valley Forge was born a new army and a new general. During those winter months, as the troops endured every conceivable hardship, they were drilled by professional soldiers, they were polished and disciplined, they were hardened! Washington himself became a different man. In the end, it is difficult to say whose example was more effective: his to the army, or the army’s to him. Then as the dreaded cold of January reluctantly gave way to spring, life began to flow back into that army. In March, General Washington electrified his men with the following announcement: “General After Orders. 6 p.m.—It having pleased the almighty Ruler of the universe propitiously to defend the cause of the United States of America and finally by raising us up a powerful friend, among the princes of the earth….” (Bruce Lancaster, The American Revolution). God had provided an important ally in the fledgling nation France. The crisis had been met. America’s destiny as a nation was established!

Historians conclude that the worst of the ordeal had ended. The war would last for another five years, but for Washington, his army and the “united” states to which they sought to give birth, a decisive victory had been won—a victory of the human spirit. The spirit of Valley Forge was now a part of the army, and because of it the prospects for final victory were considerably brighter.

Those were truly the times to try men’s souls, but there is a lesson there for today: Anyone who wasn’t ready to commit totally to the cause (the “summer soldier”), and someone who was only willing to fight under the best circumstances (the “sunshine patriot”), had no place in that honored band of fighters. Those who quit when the going gets tough must be weeded out of the fight. Those who don’t have the stomach to stand up for the rights God gives us will not be in the fight!

To understand that, we must go farther back in history. In the book of Judges, another account of some “minutemen” is recorded. A man by the name of Gideon was moved to stand up for a cause. God charged him to raise up an army against the Midianites; 32,000 joined to fight. But we read in the seventh chapter how God demanded that, through a series of trials, Gideon pare down his army to a mere 300, “lest Israel vaunt themselves against me, saying, Mine own hand hath saved me.”

Just as He did in 1777, God removed the summer soldier and the sunshine patriot from His army. That’s the way He operates. In the first place, God is not willing to use those who are not totally dedicated. Secondly, the fewer numbers highlight the fact that “the battle is the Lord’s”! If only we would look back today and awake to the fact that God has always fought our battles. God has always provided the miracles—He has always given the victory if we are a righteous people. What a tragic mistake we make today to even think that we “earned” this nation, or that we can solve our problems without God!