The UN’s failures at peace were prophesied since its inception. Here’s the “peacekeeping” power that will fill its shoes. 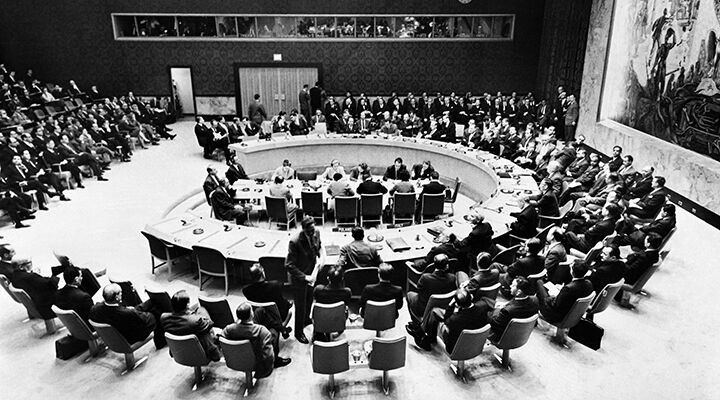 The UN’s failures at peace were prophesied since its inception. Here’s the “peacekeeping” power that will fill its shoes.

Herbert Armstrong, termed by many world leaders an “unofficial ambassador for world peace,” attended the inaugural session for the United Nations in San Francisco, April 1945. From San Francisco, Mr. Armstrong wrote that day: “Already I see the clouds of World War III gathering at this conference…. I do not see peace being germinated here, but the seeds of the next war!… The United Nations conference is producing nothing but strife and bickering, and is destined from its inception to end in total failure. Yet world leaders are pronouncing it the world’s last hope—with the only alternative annihilation of humanity!”

In a personal in the August/September Plain Truth some 25 years later, he wrote, “World War II was the ‘war to end all wars.’ The United Nations was the world ‘peace effort’ to prevent further wars. What are the results after a quarter-century? There have been more than 50 wars. The UN has contributed to the shortening of four wars—But—there is no evidence to show that the United Nations has prevented any war!”

In the January 1977 Plain Truth, Mr. Armstrong prophesied:”For the immediate future—the next five, ten or twenty-five years—the sobering revelation of Bible prophecy shows this world will go from bad to worse. World confusion, hatred, strife, warfare and terrible destruction will increase with rapid acceleration. It’s the natural course to expect.”

And indeed, nearly 25 years later, we see these predictions verified. But notice the next paragraph!”The United Nations won’t be able to bring peace. The aggressor nations—and we are so gullible we never recognize them until after they plunge the world into another war—will go right on with their scheming and diabolical planning for world rule.”

I think you get the picture. Mr. Armstrong knew that the United Nations would not—could not—bring peace to this world. How did he know? By looking into God’s word, which reveals the nature of man. “And the way of peace have they not known” (Rom. 3:17). He saw, through the Bible, that peace would never come on the earth by mankind; it could only be possible by Jesus Christ upon His return with His world-ruling government to usher in a thousand years of utopian peace and harmony (Rev. 20:4-6; Isa. 2:2-4; 9:6-7; 11:1-9).

So was Mr. Armstrong correct? Was he—as God’s messenger of specific prophecies concerning our time today—accurate in his predictions?

Let’s take a brief look at the UN’s track record. The 188-nation organization has been the center of growing cynicism. Sir Anthony Parsons, British Ambassador to the UN from 1979 to 1982, declared it “a disastrous failure.” Jeanne Kirkpatrick, American ambassador to the UN in the early ’80s, said it was “nothing more than a place for the nations to let off rhetorical steam.”Karl Posche, appointed as an efficiency expert in 1995, said after seven months on the job, “The UN is a good example of waste and inefficiency.”

Since the inception of the UN in 1945, there have been 187 wars with over 45 million killed—nearly as many as in World War II itself! The UN has been involved in 49 peacekeeping missions since that time, presently maintaining 17 missions. And the number of worldwide conflicts at the present is 33—resulting in over 20 million refugees! Is the UN succeeding in “keeping peace”? Or have God’s prophecies, as proclaimed by Mr. Armstrong, come to pass?

The stories under those last two headlines show how top UN officials, according to several reports, are becoming good apologizers. The APOnline report described Secretary-General Kofi Annan’s regrets for allowing the 1994 Rwandan genocide in which almost 800,000 minority Tutsis were victims of a Hutu-sponsored genocide. Annan had similar feelings concerning the death of thousands of Bosnian Muslims in the UN-protected enclave of Srebrenica in 1995. To the people of East Timor, another apology was in order for not preventing the violence that engulfed the territory late last year, according to the head of UN Transitional Administration in East Timor, Sergio Vieira de Mello. “We have to acknowledge our mistakes and shortcomings,” he said.

The organization has experienced some minor successes, however, when it “brokered a Russian withdrawal from Afghanistan, an end to the Iran-Iraq war, independence for Namibia and reconciliation in Cambodia, as well as the collective military response to Iraq’s invasion of Kuwait” (London Times). But, according to this report, “since the heady days at the end of the cold war…the organization has seen its powers whittled away.” Yes, the world scene has changed dramatically since then, with the downfall of communism and the rapid rise of the European superstate. Is it coincidental that the UN would begin to be whittled away from that moment? Hardly!

Also, note how the UN was “initially sidestepped in the Kosovo conflict” (Reuters, Dec. 30, 1999). Instead, enter nato—with Germany pulling the strings!

Yes, Mr. Armstrong’s predictions—some 55, some 25 years old—have come to pass. But the Trumpet magazine has made predictions on top of those. In our December 1995 issue, we stated—concerning the pope’s visit to the UN during its jubilee year:”Is it possible that the pope, whose rallying cry to the nation-states of Europe is to ‘return to your [Catholic] roots,’ sees that the ailing and divided voice of the UN is on the verge of needing replacement from a more vigorous ‘peacemaker’? A peacemaker of beast-like proportions, mounted by a great whore who has dominated Europe in her previous historic guise as the ‘holy’ component in the Holy Roman Empire” (write for your free copy of The History and Prophecy of Germany).

Understand! The failure of the UN to keep peace in the world will be replaced, first by a united Europe under the umbrella of Catholicism, but ultimately by the return of Jesus Christ—the Prince of peace (Isa. 9:6), who will rule the Earth for 1000 years—making all nations united in His way of prosperity!

That is man’s only hope for peace. That has been prophesied in the Bible. Mr. Armstrong restated it for many to hear. The Trumpet prophesies the same so more can hear it. And very shortly, that prophecy will thankfully come to pass!