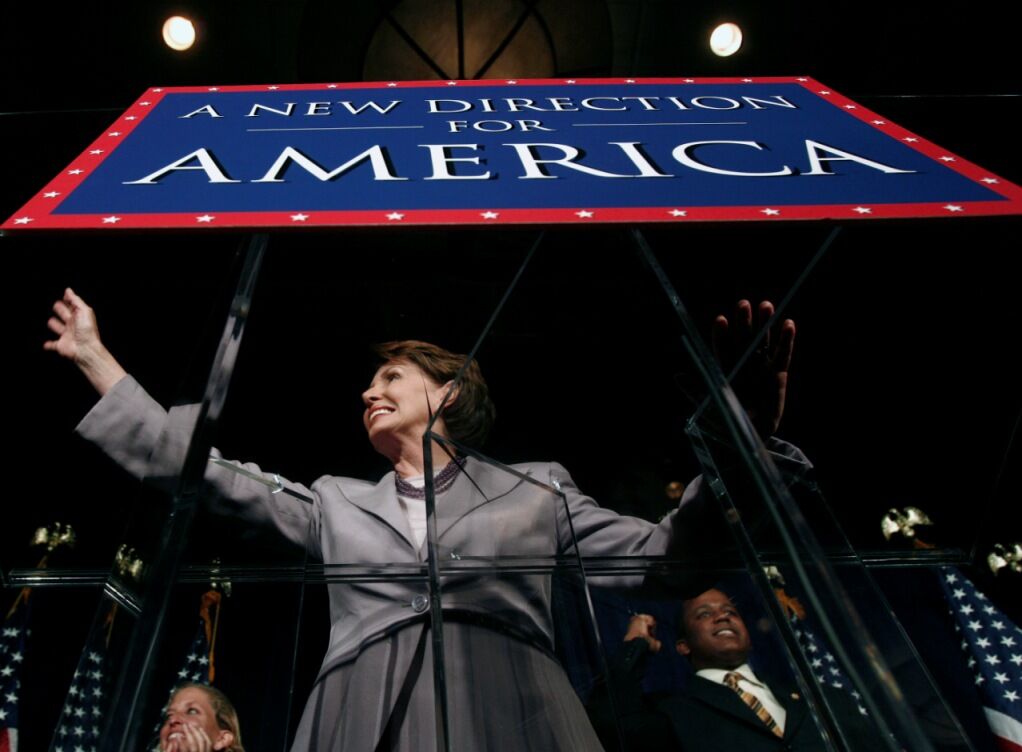 The elections that awarded Democrats control of the U.S. Congress marked a dramatic turning point in American history. You need to understand why.

In the run-up to the elections, it seemed that nearly every critical race could go either way. But on Election Day, the Democrats made virtually a clean sweep.

God may well have had a hand in these results.

You don’t need deep biblical understanding to realize that something is dreadfully wrong in this country. America is being cursed!

Times have never been more dangerous for America. We face wars on multiple fronts. Do you think a government dominated by antiwar politicians can save America from its enemies?

The election of the Democrats, I believe, reveals the desperate lack of will in our people more than any other single event. This election sent a message to terrorists just as surely as Chamberlain sent a message to Hitler when he traveled to Munich before World War ii and accepted a paper promise of “peace for our time.” Most of the British people were hysterical with joy! But oh, how short-lived that “peace” was!

President Bush has not been successful in Iraq, but at least he used some measure of force. He could have achieved more if our people supported him. Now extreme liberals dominate our government.

Time will prove this to be a deadly curse on the United States!

In the midterm elections, the United States surrendered to Iran and the terrorists.

Do you think these new leaders see the gravity of the problem in Iran? Tehran is run by a madman and is the obvious king of radical Islamic terrorism—yet Democrats do not comprehend the sobriety of this situation. Even most Republicans do not!

The new speaker of the House is a Democrat from San Francisco, Nancy Pelosi. This liberal woman, who is now second in line for the presidency after Vice President Dick Cheney, is pro-abortion and pro-homosexual marriage; she wants to allocate federal spending for stem-cell research, which involves experimenting on unborn babies.

Democrats are excited by the fact that “San Francisco values” are now echoing through Washington’s halls. Is this what America needs? One newspaper stated, “Pelosi will be speaker and her far-left San Francisco values—gay marriage, cutting and running from Iraq, coddling terrorists, raising taxes, amnesty for illegals—will become the House agenda” (San Francisco Chronicle,November 3). San Francisco values will now permeate every major decision made by the American government.

Pelosi has sharply rebuked the president, calling him an “incompetent leader” and saying he is “not a leader” at all (ibid., November 10). She has called Bush’s administration “immoral” and a “freak show.” This from the mouth of a strong liberal who hails from the immoral and repugnant city of San Francisco.

Pelosi is also very ambitious. A 2003 story in the National Catholic Reporter said that her mother “encouraged her to pursue a religious vocation,” but she had her doubts. “I didn’t think I wanted to be a nun,” Pelosi said. “But I thought I might want to be a priest. There seemed to be a little more power there ….”

She once toldTime magazine, “Anybody who’s ever dealt with me knows not to mess with me.”

At the same time, Nancy Pelosi is strongly antiwar.

Whether we accept it or not, radical terrorists are waging war on America. How can a politician be antiwar when, like it or not, we are in a war?

Prior to the midterm election, when it was obvious that Republicans would suffer serious losses, Dr. George Freidman wrote, “George W. Bush is a lame duck in the worst sense of the term. Not only are there no more elections he can influence, but he is heading into his last two years in office with terrible poll ratings” (October 31, emphasis mine throughout). If the Republicans lost the House, commented Friedman, this would be a “loss that will generate endless hearings and investigations on foreign policy, placing Bush and his staff on the defensive for two years. Making foreign policy in this environment will be impossible.”

Massive crises loom over our shores, yet our government, weighed down with internal crisis and friction, has become a lame duck.

The American government has been taken over by a political party with a history of weak, inept foreign policy.

In an October 10 piece, Dr. Friedman wrote, “Diplomacy without a realistic threat of significant action, in the event that diplomacy fails, is just empty chatter.” You can be sure that’s all we will hear from the U.S. over the next two years—empty chatter—because President Bush doesn’t have the power to do anything.

Meanwhile, foreign threats such as Iran, Iraq, North Korea, China, Russia, radical Islam and Europe will intensify unabated. That is an indescribable disaster for America—and the world!

It is a law of history that nations rife with vile beliefs and values will be overpowered and conquered. Barbarians from northern Europe overpowered ancient Rome in the fourth and fifth centuries when Roman leaders, preoccupied by wealth, materialism and vile and lascivious behavior, became disunited and distracted.

History teaches that San Francisco values and beliefs do not work. People who fail to look to history do not learn the lessons it furnishes.

In an introduction to Winston Churchill’s biography of his ancestor Marlborough, Henry Steele Commager wrote, “[Churchill] cherished as a law of history that a people who flout these virtues [order, justice, resoluteness, magnanimity] is doomed to decay and dissolution, and that a people who respect them will prosper and survive.“

Learning lessons from great leaders of the past is critical to our national well-being. If we flout those heroic virtues, our nations are doomed to “decay and dissolution.” But if we respect and emulate them, we will “prosper and survive.”

What would Churchill say about America’s recent election?

America is facing a kind of war unprecedented in its history. A terrorist attack could occur at any moment in any location. But we are now led by a liberal leadership that refuses to acknowledge the threat of war.

Winston Churchill believed that the test of greatness is war. “All great struggles of history have been won by superior willpower wresting victory in the teeth of odds,” he wrote in Marlborough. “The story of the human race is war.” Churchill knew that possessing strong willpower is critical to winning wars.

When the American people handed antiwar Democrats control of Congress, they revealed their unwillingness to stand in the face of adversity. They exposed a massive deficit of willpower and determination!

In 1938, one of Britain’s lords wrote in a letter to Churchill this comment, which shamefully applies today: “The public is so terrified of being bombed that they will support anyone who keeps them out of war. I always knew they had no desire to stand up to the dictators, and I always knew that when there was a sharp issue of peace or war, 95 percent of the electors would rally to the peace policy, however humiliating such a policy might be.”

The Democrats’ post-election celebrations will be terribly short-lived. A person only has to know a little bit about leadership and history to know that this nation cannot handle the problems America is about to face!

Saddam Hussein said, “You Americans can’t take the blood.” He is right! The majority of Americans have proven that they cannot handle some of our soldiers—the best of our best citizens—spilling their blood. That lack of willpower means the nation is destined to die! Rather than a few soldiers, the blood of the whole nation will flow in rivers!

The congressional election results prove we are witnessing the demise of American global leadership. President Bush will not be able to accomplish anything of substance again. Internal crisis and division will prevent the U.S. from conducting a respectable foreign policy.

I believe thatafter we retreat from Iraq, America will neverFIGHTanother war!

We simply don’t have the fortitude to survive. Our new leaders are afraid to even call a war a war!

This election marked a monumental turn in America’s history.