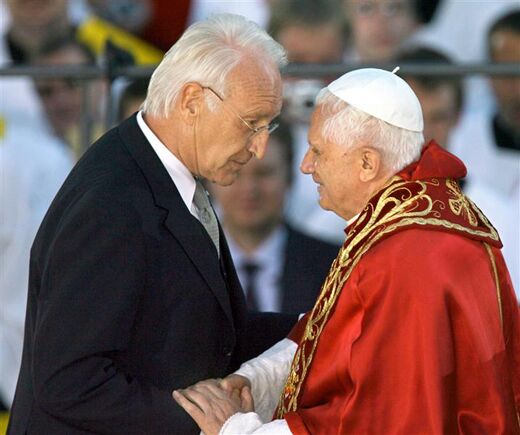 While world attention focuses on the Middle East, an empire of the past rises behind the scenes in Europe, resurrecting into a power of such might that it will soon reduce the boasting of Iran’s president to a mere squeak.

Beyond doubt, the events that dominate front and center stage in world news today surround the Middle East. Iran, Iraq, Lebanon, Syria, Israel—events happening in these nations fill the daily headlines on the front pages and in the international news sections of most newspapers. At the heart of them is President Mahmoud Ahmadinejad. He rants and he raves about Iran’s determination, against the will of most nations, to develop a nuclear potential. He blatantly pours both financial support and armaments into the spreading web of terrorist nations and organizations intent on doing harm to the U.S. and Britain. And he says that he does it all for the will of Allah.

But, while the effects of Middle East warmongering and saber-rattling hold much of the world’s attention, the biggest news event of this decade is going largely unnoticed by the media and press, by most news analysts and commentators. Yes, even more vital events are building behind the scenes, well hidden behind the glare of the spotlight currently playing on the Mideast imbroglio.

That which is presently building north of the Middle East, at the very heart of the European continent, is soon to thrust itself onto the world stage in a sudden burst of pent-up political, economic, religious and military might.

This is an event that has been the focus of the Trumpet magazine since its inception, and for the 50-some years of monthly editions of the Plain Truth magazine under its founder and editor Herbert W. Armstrong. The combined editions of these two international newsmagazines—the one under the continuing editorship of founder Gerald R. Flurry, the other, while under the editorial control of Herbert Armstrong—have featured more on this particular news event than any other publication.

Although the Trumpet regularly covers a broad spectrum of world events, together with social, economic and religious issues, there is a core message of one key, unfolding world event that the Trumpet has monitored and reported on from this magazine’s inception. It is the same event headlined in the very first issue, in February 1934, of the Plain Truth, whose role of warning the world of this event the Trumpet took over following the death of Mr. Armstrong.

In fact, it is a news story that had its genesis back in 31 b.c. with the rise of the Roman Empire and its fall in a.d. 476 with the demise of Romulus Augustus, emperor of the western leg of the empire. For this was an empire that ancient prophecies had declared, millennia in advance, would rise again, and again, and again. The prophecies of your Bible forecast seven distinct resurrections of that old empire. But there was to be something unique about these resurrections—something that started in a.d. 554, when the Byzantine Emperor Justinian conquered Italy and increased papal power. Thus a union between church and state began, leading to the designation of “Holy” Roman Empire. As this empire periodically rose and fell, to be inevitably resurrected in accordance with the inerrant prophecies of your Bible, it was ever to be in this unique form: a union of the religion of Rome and the political institution of its ruling government of the time.

The second resurrection of this Holy Roman Empire was the Frankish kingdom of Charlemagne in a.d. 800. He is the same Karl the Great of the Germans who made his headquarters in Aachen, Germany. The decline of Carolingian empirical rule was followed by the third Imperial resurrection being the German kingdom of Otto the Great. This was the revived union of church and state known as the Holy Roman Empire of the German Nation. Then came the fourth resurrection, headed by the Austrian Hapsburg kingdom of Charles v. Following Napoleon’s rise to power, he headed the fifth resurrection, which ended in a.d. 1814 with his being deposed and exiled.

There followed a period of 120 years, during which the British Empire ruled the waves and rose to its peak of global dominance.

By 1936 the fascist leader of Italy, Benito Mussolini, had swept into northern Africa and conquered Ethiopia and Libya, already having control in Eritrea and Italian Somaliland. After signing a concordat with the Vatican, Mussolini proclaimed the resurrection of the Roman Empire. Through the joining of Mussolini with Hitler to form the Axis powers (plus Japan), together with Hitler concluding his own concordat with the future Pope Pius xii, a resurrection of that empire it certainly was! The soil of Europe is replete with the graves of millions that stand witness to the result.

But what of this final, seventh resurrection of this Holy Roman Empire?

If you have been reading the Trumpet for any length of time, you will have been following reports of its rise. In fact, while the world remains rapt in affairs going on in the Middle East, this final resurrection is quickening apace. The merging of the religion of Rome and the political “state” of the German-dominated European Union is right on course to suddenly burst upon the world scene as the mightiest of all the repeated resurrections of this empire that seemingly will not die!

At the moment, Germany is reflecting on the glory days of empire as many of its museums coordinate exhibitions reflecting on the history of “The Holy Roman Empire of the German Nation,” which met its demise, according to their history (willfully ignoring the most recent and destructive imperial grab of 1939 to 1945), in 1806.

At the same time, Germany is looking forward to celebrating its more recent imperial initiative in the guise of the developing European Union. Next year it will celebrate the 50th anniversary of the signing of the Treaty of Rome, the enabling document that started the effort to build a pan-European “Holy Roman Empire of the German Nation,” initially and innocuously known as the European Economic Community, latterly as the monolithic European Union.

Only the willfully ignorant can now overlook the patently obvious. Germany is out of its postwar closet and heading for a rip-roaring celebration of the success of its latest empire-building strategy during its upcoming stint with the presidency of the EU, which begins in January. Brilliant!

And it has all been done by trade and diplomacy. Not a round of cannon shot fired in the entire 50 years of the campaign.

All according to the plan of those who had commenced, even before the last shot was fired in anger at the close of World War ii, to lay the groundwork for the return of their beloved fatherland to imperial power in the wake of the crazed attempts at global dominance by Hitler.

It is glaringly significant, and patently symbolic, that the highest profile celebrations of the 50th anniversary of the Treaty of Rome to take place in March 2007, during Germany’s presidency of the European Union, will be held in Germany, with the leader of Europe’s most powerful and influential religion, the Bavarian Pope Josef Ratzinger, Benedict xvi, flying to Berlin for the occasion!

As German Foreign Policy observed, “The German press already reports that the religious consecration will validate the European Economic Community (eec) and will be dedicated to ‘the spiritual foundations of Europe’s political unification.’ The invitation legitimates the ‘Reich’ concept of a stable co-operation of church and state” (August 29).

Was there ever a more clear exposé of what this rising beastly power—this “United States of Europe,” which some have deigned to call the European Union—was really about?

And it was all declared to the world for decades last century by one man, Herbert W. Armstrong! And it is today declared in the fullest of prophetic detail by just one man—Gerald Flurry!

Surely the penny must drop in the eyes and ears of our detractors.

Berlin and Rome are about to throw down the gauntlet and really show Iran what real power, real military might, is all about!

There is coming a great clash of cultures, a great clash of religions, a titanic clash of old empires resurrected to finally play out a global power game that will have the world on the edge of its seats as people watch in jaw-dropping shock the final, sudden, explosion onto the world scene of the seventh, and last, resurrection of the Holy Roman Empire!