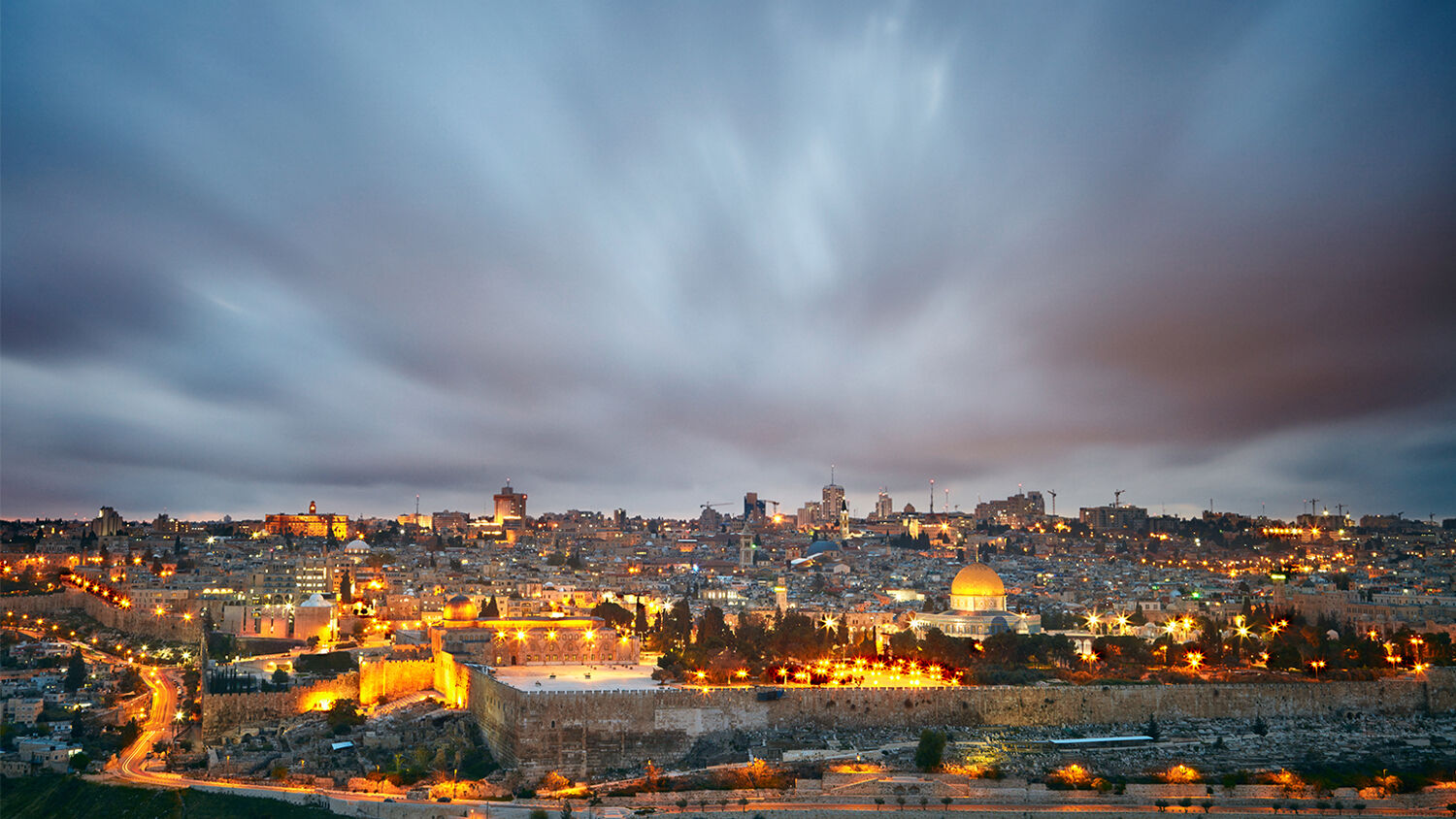 Israel’s inexplicable trust in Germany is growing. The Bible shows clearly that the outcome of this misplaced trust is Israel’s destruction—followed by the return of Jesus Christ.

The citizen of Israel stares out his window at his nation, a tear in his eye and a knot in his stomach. He knows Israel is in trouble.

It is true that for the whole of its mere half-century of existence, the country has existed without peace. But as this Jewish citizen watches Palestinian teenagers and Israeli soldiers tussling in the streets, as the multilingual shouting and popping of gunfire fills his ears, he knows that today the situation is worse than it has ever been. He fears Israel is changed forever.

When World War ii ended, there were many Jewish refugees with no place to call home. Most of the world became sympathetic to these Jews.

The Jews had no real army. They were losing the war after three weeks. Then the Arabs strangely called for a temporary truce. This is exactly what Israel needed to re-arm and train their weary troops—many of them civilians who carried guns.

Shortly thereafter the Arabs started fighting again. This time the Jews were well prepared and soon won the war.

It was a miracle from God. Many of the Jews acknowledged that. They experienced many miracles in the following years.

The Jews were prophesied to have a nation in this end time. So it had to happen!

The Jews were determined fighters. This was their first sovereign nation in 2,000 years. Only death could make them surrender their new and only homeland.

There continued to be many problems between the Jews and Arabs. The problems became so intense in 1967 that almost every nation in the world believed the Arabs were about to attack Israel again.

The Soviet Union was strongly urging Egypt to attack. Egyptian troops poured into the Sinai and ordered the UN forces out. War seemed imminent.

Egypt, Jordan and Syria were allied to start a war. So the Jews felt compelled to strike first. Jewish war planes flew into Egypt and destroyed 300 Egyptian combat fighters in three hours. The Jews then captured all of the Sinai, the Suez Canal, East Jerusalem, the West Bank and the Golan Heights in just six days.

Again, a series of miracles by God saved the Jewish nation.

Tourists began to pour into Israel. The state became prosperous and complacent. The Jews were lulled into a false sense of security.

In late 1973, the Jewish military ignored serious intelligence reports that the Arabs were again going to attack. The attack occurred on October 6—during the solemn Jewish holiday of Yom Kippur.

The Jews won the war in three weeks, with much aid from the Americans. Egypt was beaten, but not humiliated. Once again biblical Judah had been miraculously saved.

But soon after, something dramatic changed in Israel.

Menachem Begin was elected prime minister in 1977. President Carter persuaded him to give the Sinai back to Egypt in the late 1970s.

This was the beginning of the Israeli-Arab peace process. The Jews gave up land for a piece of paper.

When the Jews gave the Sinai back to Egypt, that probably included Mount Sinai, where God gave the Ten Commandments to Moses. This fiery mountain spectacle gave birth to the nation of Israel! The Sinai area was where the children of Israel wandered for 40 years as they rebelled against God’s law. Giving the Sinai back to Egypt is at the heart of their problems! Their history with God is virtually meaningless! The Jewish nation was born and sustained by godly miracles. But it still refuses to trust God!

The Jews have also given Gaza, Jericho, Bethlehem and other West Bank areas back to the Palestinians. It seems the world has forgotten that those areas were won in a war where the Arabs were trying to annihilate the Jews. This land-for-peace process is almost unheard of in history, except perhaps what has recently happened in South Africa. God gave Bethlehem—the birthplace of Christ—to the Jews. Through the “peace” process, they gave it to the Palestinians. The Jews rejected and crucified Christ almost 2,000 years ago. They still reject Him today. But then, so do most of those people who profess to be Christians.

The Jews have given back many other biblical sites to the Arabs. America and Britain have strongly urged them to do so. We fail to realize that such a lack of faith is why all the adults of ancient Israel had to die in the Sinai wilderness.

Throughout this terribly misnamed “peace” process—involving giving up land and seeing no appreciable drop in violence—Palestinian leaders have consistently told politicians and media that they want peaceful coexistence with Israel while simultaneously promising to their people Israel’s destruction.

Now, after years of gambling with its own soil, Israel finds itself depleted of property and will, sapped and bloodied by a policy that has publicized, for all to see, the fatal weariness of this tiny nation.

In the Philadelphia Church of God’s message today, we must tell Judah, America and Britain the real cause of their serious problems. It is their only hope of survival!

The book of Hosea was written as prophecy for the end time. Again, the nation called Israel today is really biblical Judah. There are some specific prophecies about Judah in this book. “When Ephraim saw his sickness, and Judah saw his wound, then went Ephraim to the Assyrian, and sent to king Jareb: yet could he not heal you, nor cure you of your wound” (Hosea 5:13). Studying this verse in the original Hebrew reveals that both Ephraim (Britain) and Judah (called “Israel” today) go to Assyria (or Germany—to prove that fact, write for our free booklet Germany and the Holy Roman Empire).

Why do the Jews go to Germany, and what is Judah’s wound? The word wound is number 4205 in Strong’s Concordance. It means “in the sense of binding up: a bondage, i.e. remedy.” Gesenius’ Lexicon defines it this way: “the pressing together, binding up of a wound; here used figuratively of a remedy applied to the wounds of the state.” In other words, the remedy is the wound!

Another word for wound is also mentioned in Obadiah 1:7: “All the men of thy confederacy have brought thee even to the border: the men that were at peace with thee have deceived thee, and prevailed against thee; they that eat thy bread have laid a wound under thee: there is none understanding in him.” This wound is number 4204 in Strong’s. Gesenius defines it as “falsehood; hence, fraud, insidious dealing … net, or snare.” It has the same root word as the word used in Hosea 5:13. In Obadiah the wound is directly related to being deceived by a peace pact!

Is the peace pact with the Arabs the Israeli wound that God refers to in Hosea 5:13? There would have been no peace pact if Judah would have trusted God instead of men. The word wound in verse 13 means bandage. It’s as if a bandage is hopelessly applied to an open, running sore. From the beginning of the peace process, the Jews have looked to men, often their enemies, for help—not God. That is the unseen wound.

So little trust in God—so much trust in their enemies!

The real wound is spiritual—a lack of faith in God. The Jews keep trying to heal themselves by making peace pacts. They were strong when they trusted God. Even recent history proves that truth. Just a few years ago they were a terror to the Arabs. Now the Arabs are a terror to the Jews. A complete reversal in such a short time! Why?

The Israelis will finally see that their peace pact with the Palestinians has failed. The Jews really only see the effect of their wound. They don’t see the cause. That is why they turn to Germany for another peace pact! This time they place their trust in an even greater enemy! Once again they fail to trust God. It will lead to the worst disaster in the Jews’ long history of suffering. The deadly delusion that problems can be solved by negotiation is going to lead Israel and the U.S. to disaster!

There is a reason why everything seems to go wrong in America, Britain and Judah. But our people never seem to fear God enough to turn from our sins! And that does not mean to repent of what we call sin, but what God calls sin—God’s definition.

So God states, “I will break the pride of your power.” That means we have power, but lack the will to use it.

Let’s look again at Hosea 5:13. “When Ephraim saw his sickness, and Judah saw his wound, then went Ephraim to the Assyrian, and sent to king Jareb: yet could he not heal you, nor cure you of your wound.” Lange’s Commentary states that the word Jareb, the German leader, means “warlike monarch.” The Soncino Commentary translates it as “King Contentious.” He will be far more dangerous than Hitler was.

If you read our literature on Germany, you will see that this leader will be ruled by Satan! And Britain and the Jews will go to him for mercy and aid!

Already the European Union has stepped up its efforts to help the Middle East peace process as the U.S. pulls out of the region and grows weaker. German-led Europe has been publicly mentioned as being a protector to Israel.

It seems the Israelis can trust their worst enemy, but they can’t trust God to protect them! And God is their only source of help.

Israel will become “lovers” with the Germans. This move will lead to their destruction. It is not the Arabs who will destroy them. The friendship between Germany and Israel will lead to one of the biggest double-crosses in the history of man! (For more information, request Jerusalem in Prophecy.)

“Blow ye the cornet in Gibeah, and the trumpet in Ramah: cry aloud at Beth-aven, after thee, O Benjamin. Ephraim shall be desolate in the day of rebuke: among the tribes of Israel have I made known that which shall surely be” (verses 8‑9). God has made their sins known to them through Herbert W. Armstrong and our Church today. You are reading that trumpet message now! Hosea is specifically about our work today (write for our booklet on Hosea). The Jews are going to suffer at the hands of the Arabs and Germans until they awaken! They must acknowledge our message from God! If they don’t hear the alarm of war through our message, they must experience being conquered!

Look around. Do you see peace? The more violence we see, the more they talk about peace! They don’t know how to have peace. “The way of peace they know not; and there is no judgment in their goings: they have made them crooked paths: whosoever goeth therein shall not know peace” (Isaiah 59:8).

Through the peace process, Judah has become vulnerable to the enemy, with very little freedom to strike back. Just a few years ago, they would have retaliated with far greater force! But not today.

Soon the whole world will see what the Arabs saw all along—that the peace process is a wound from which the Jews will never recover!

Unless they repent, their future is extremely bleak. The good news is, this present crisis will soon culminate in the return of Jesus Christ. What a glorious future that lies just ahead! But immediately before that event, the worst time of suffering ever on Earth is upon us.