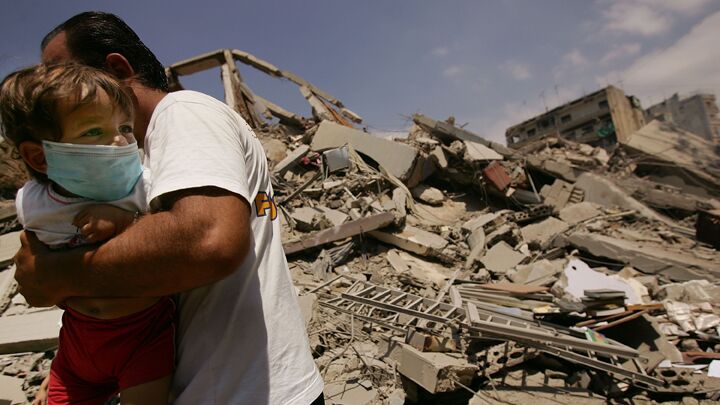 Last night I watched the news on an Australian public broadcasting channel, sbs. I may as well have watched Al Jazeera. This is a news channel funded by Australian taxpayers’ dollars, airing to an English-speaking nation that has, from the outset, given willing support to the war on terror. Yet so brazenly imbalanced was its reporting of the current war between Israel and Hezbollah, I was taken aback.

The problem is, too many will believe the report that I viewed and form opinions and react accordingly. In the process, they will become the unwitting pr minions of the great anti-Israel spin machine that daily and nightly grinds out its message of its hatred for global Jewry and its most obvious geographic icon, the tiny, embattled nation of Israel.

In Britain, the bbc suffers from the same shameful bias. A July 24 Times Online article titled “The bbc, Marred by Hezbollah” comments rather tongue-in-cheek, “If you watched yesterday’s Andrew Marr program on bbc1, you would have seen a British tv landmark. To judge from its contents, the program was the first to have been edited by the leader of Hezbollah, Sheik Hassan Nasrallah. …

“[O]f the four guests interviewed, not one had anything but bile to pour over Israel. … All were treated with deference by Andrew Marr, as he invited them to honor us with their sagacity. … [I]t is entirely improper that not one second should be allowed on what the bbc’s website calls its ‘flagship political program’ for the view of anyone who thinks there just might be some justification for the Israeli action. Not that we should be surprised. The bbc’s coverage has been overwhelmingly one-sided, with presenters and reporters editorializing against what they universally refer to as ‘Israeli attacks on Lebanon.’”

The most deeply worrying thing about the sbs piece I saw is that it was delivered by a reporter who was given ready access to bomb sites (the result of Israel’s response to the thousands of rockets being fired by the terror group Hezbollah into its cities) by that same terrorist organization. In the process, the reporter virtually became the tool of Hezbollah propaganda.

Such a phenomenon is becoming de rigueur for even higher profile, internationally aired news channels. For instance, cnn’s senior international correspondent Nic Robertson freely admitted that during a piece aired on Anderson Cooper 360SDgr July 18, he had been used as an all-too-willing tool in the Hezbollah propaganda drive in constructing a report on the current Mideast war.

Robertson explained how a Hezbollah propagandist had given him a guided tour of a bombed-out area in south Beirut. According to Newsbusters.org, “Hezbollah claimed to show that Israeli bombs had struck civilian areas of the city, not the terrorist group’s headquarters. The Hezbollah ‘press officer,’ Hussein Nabulsi, even directed cnn’s camera: ‘Just look. Shoot. Look at this building. Is it a military base? Is it a military base, or just civilians living in this building?’” (July 19). In his initial report, Robertson went along, voicing comments like, “As we run past the rubble, we see much that points to civilian life, no evidence apparent of military equipment.”

The following week, the mask came off. cnn’s Reliable Sources ran a live interview with Robertson, during which he said, “[T]here’s no doubt about it: Hezbollah has a very, very sophisticated and slick media operations. … [T]here were Hezbollah security officials around us at the time with walkie-talkie radios …. They had control of the situation. They designated the places that we went to, and we certainly didn’t have time to go into the houses or lift up the rubble to see what was underneath“ (emphasis mine). Robertson said Hezbollah was routinely taking journalists on these tours. “They realize that this is a good way for them to get their message out, taking journalists on a regular basis.”

Which side are such journalists on? As the old saying goes, a picture says a thousand words. By putting the precise pictures to the world that Hezbollah wants it to see (would we expect them to show journalists anything to verify that Israel is hitting the right targets?), these media outlets are actually placing themselves at the disposal of the Hezbollah spin machine. Whatever their motivation (most likely to do whatever it takes to get an “exclusive” or breaking story), these personalities and the networks are actually aiding in fighting Hezbollah’s war!

The power that this propaganda offers in swaying public opinion against Israel is potent. In fact, Hezbollah is already way in front in winning the pr war in the current conflict. Notice what Stratfor reported July 25: “There is … a public relations shift taking place. In the early days of the air campaign, there was a surprising amount of international support for Israel. As the air campaign wears on and the pictures of civilian casualties beam around the world, that support is deteriorating. Israel is coming under greater political pressure.”

The media can be equally powerfully used for good or evil. Their effect in swaying—even determining—public opinion, and the effect that has on vote-dependant administrations, should not be underestimated. Right now, it is Hezbollah that is using it with the most expertise, and the result will not contribute to the good of society generally, let alone in the Middle East—least of all to the embattled nation of Israel.