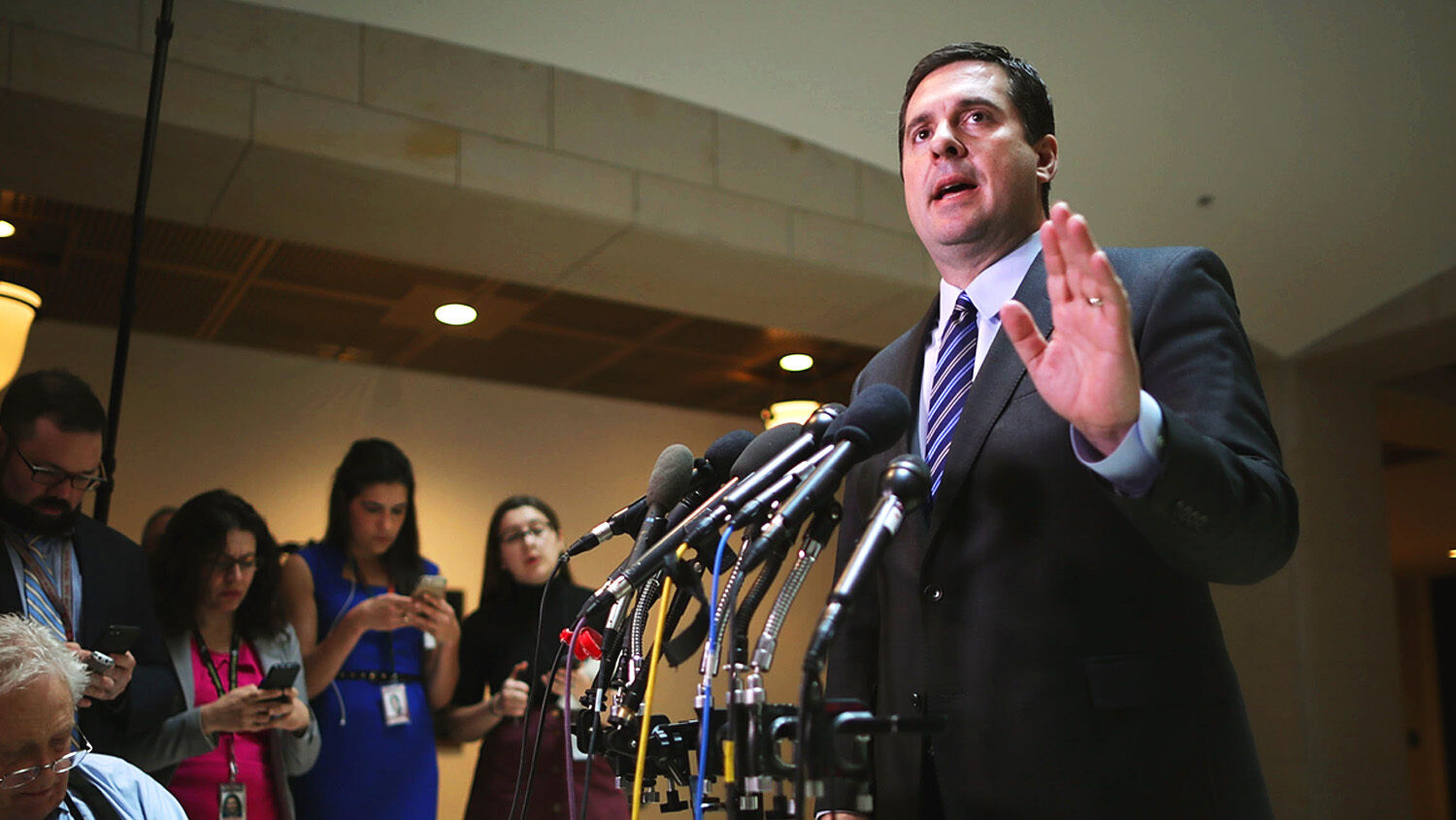 Corrupt radical Democrats tried to suppress the miraculous memo that exposed them.

Do you remember the fight over the Nunes memo? Democrats had been accusing Donald Trump of colluding with Russia to steal the 2016 presidential election. They said they had evidence. They said that President Trump’s agenda, policies and entire presidency were illegitimate. Many people were taking them seriously. Many people suspected that it was a shockingly bold and incredibly gigantic lie. Then House of Representatives Intelligence Committee Chairman Devin Nunes wrote a memo: Foreign Intelligence Surveillance Act Abuses at the Department of Justice and the Federal Bureau of Investigation. Numerous Twitter posts demanded #ReleaseTheMemo. Democrats said the posts were from Russia. It was either further penetration of American politics by a major adversary—or it was a rapidly billowing lie.

Now we are finding out more about what really happened.

After Twitter owner Elon Musk and journalist Alex Berenson exposed how Twitter erased information about covid-19 with the help of a former Pfizer lobbyist in Twitter Files 13.0, Musk and journalist Matt Taibbi released Twitter Files 14.0. These posts and behind-the-scenes e-mails reveal the company’s research into the Democrats’ claim that #ReleaseTheMemo came from “Russian bots.” They also reveal how Democrats responded.

Was the accusation against Donald Trump legitimate? Was Nunes trying to protect an illegitimate president who stole the election? Were demands to see the memo an extension of this shocking and dangerous Russian infiltration?

Either way, the very top of American politics has, in fact, been penetrated by a major adversary.

The Nunes memo exposed boatloads of corruption inside the fbi and the Department of Justice. Yet its biggest exposé was probably the revelation that federal law enforcement agencies not only spied on the Trump campaign but based that spying on a Russian propaganda dossier. My father, Trumpet editor in chief Gerald Flurry, wrote at the time that top officials knew the infamous Steele dossier was both salacious and unverified. Yet they still presented it to the Foreign Intelligence Surveillance Act court as if it were proof of a legitimate foreign threat to America.

They knew Trump was the legitimately elected president of the United States! And they still spied on him and tried to destroy his presidency.

According to the Nunes memo, former fbi Deputy Director Andrew McCabe admitted that there would have been no Russia investigation if not for the Steele dossier. The politicians and spies using this false dossier to attack Trump made it look like Nunes was lying for Russia. Radical Democrats fought hard against the memo’s release, but the Twitter trend #ReleaseTheMemo went viral. Democrats said that mostly Russian “bots” and “trolls” wanted the memo released.

Republicans ended up releasing the memo to the public regardless, and today we know the “Russian collusion” accusation was a deceit used to attack the president, his policies and the tens of millions who voted for him!

This is where the “Twitter Files” enter the picture. Taibbi has released a letter showing that Twitter executives informed Sen. Diane Feinstein and Rep. Adam Schiff on Jan. 26, 2018, that Twitter “has not identified any significant activity connected to Russia with respect to tweets posting original content to this [#ReleaseTheMemo] hashtag.” Twitter could have helped tie Trump to Russia, but even though it was full of Democrats, radical liberals and even former federal agents, no one could find a link. Even radical-leftist Twitter executive Yoel Roth had to admit at the time, “We investigated, and found that engagement was overwhelmingly organic ….”

Twitter informed leading Democrats like Richard Blumenthal, Diane Feinstein and Adam Schiff that it was real people demanding the release of the memo, not Russian “bots,” but those politicians continued claiming “it’s the Russians” regardless.

Feinstein, Schiff and others continued to delegitimize Rep. Devin Nunes’s research on the Russia-Trump probe as false even after the Horowitz Report verified most of what Nunes and his staff wrote in their memo.

“The Nunes assertions would virtually all be verified in a report by Justice Department Inspector General Michael Horowitz in December 2019,” Taibbi continued in his 40-tweet thread. “Nonetheless, national media in January and early February of 2018 denounced the Nunes report in oddly identical language, calling it a ‘joke.’”

Yet the Nunes memo was not a joke. It was one of the most sobering exposés in history. Nunes told Taibbi, “Schiff and the Democrats falsely claimed Russians were behind the #ReleaseTheMemo hashtag, all my investigative work …. By spreading the Russia collusion hoax, they instigated one of the greatest outbreaks of mass delusion in U.S. history.”

The radical left used the Russia collusion hoax to weaponize the U.S. Intelligence Community, to de facto nationalize Big Tech, to impeach President Donald John Trump and ultimately to help steal an election from him.

Twitter Files 15.0 continues this story in a 10-tweet thread showing that Schiff, who succeeded Nunes in leadership of the House Intelligence Committee, sent Twitter repeated requests for bans of people critical of his office. Schiff was spreading the Russia collusion hoax as Twitter was telling him it was false and simultaneously telling Twitter to silence those who tried to expose him.

The scary thing is that the radical left likely would have gotten away with their plan to destroy the Make America Great Again movement if it were not for a memo compiled in the days leading up to its release on Jan. 18, 2018.

Dates in mid-January are deeply significant. The Iran nuclear deal was implemented on Jan. 16, 2016. The Barack Obama administration conspired against President-elect Donald Trump in January 2017, the Nunes memo was compiled on Jan. 16, 2018, and Twitter Files 16.0 (revealing that Big Pharma pressured Twitter to suppress debate over mrna vaccines) was released on Jan. 16, 2023. There are a number of other significant events that have occurred on or around this date, and more will likely emerge as time goes on.

“God is active in these events,” my father wrote in his 2020 article “The Barack Obama Mystery.” “He is trying to get our minds focused on January 16. When Herbert W. Armstrong died on Jan. 16, 1986, he left behind a church with 725 congregations in 57 countries around the globe and a powerful work going out to the world. It had a weekly worldwide audience of more than 130,000 people, and another 210,000 outside the Church donated money regularly. Serving these many members, prospective members and contributors were more than 1,200 ministers worldwide. But his successors systematically destroyed the Worldwide Church of God using many of the same tactics that Obama administration officials are using to destroy the United States. There was a behind-the-scenes conspiracy to fundamentally change church doctrine and force these changes on church membership.”

The “Twitter Files” are revealing the radical left’s corruption, but we must look beyond the radical left to the evil spiritual force tearing America apart and to the great God exposing this force. For more information about the Bible prophecies explaining the treason in our country, request your free copies of America Under Attack and January 16: God’s Miracle Day.