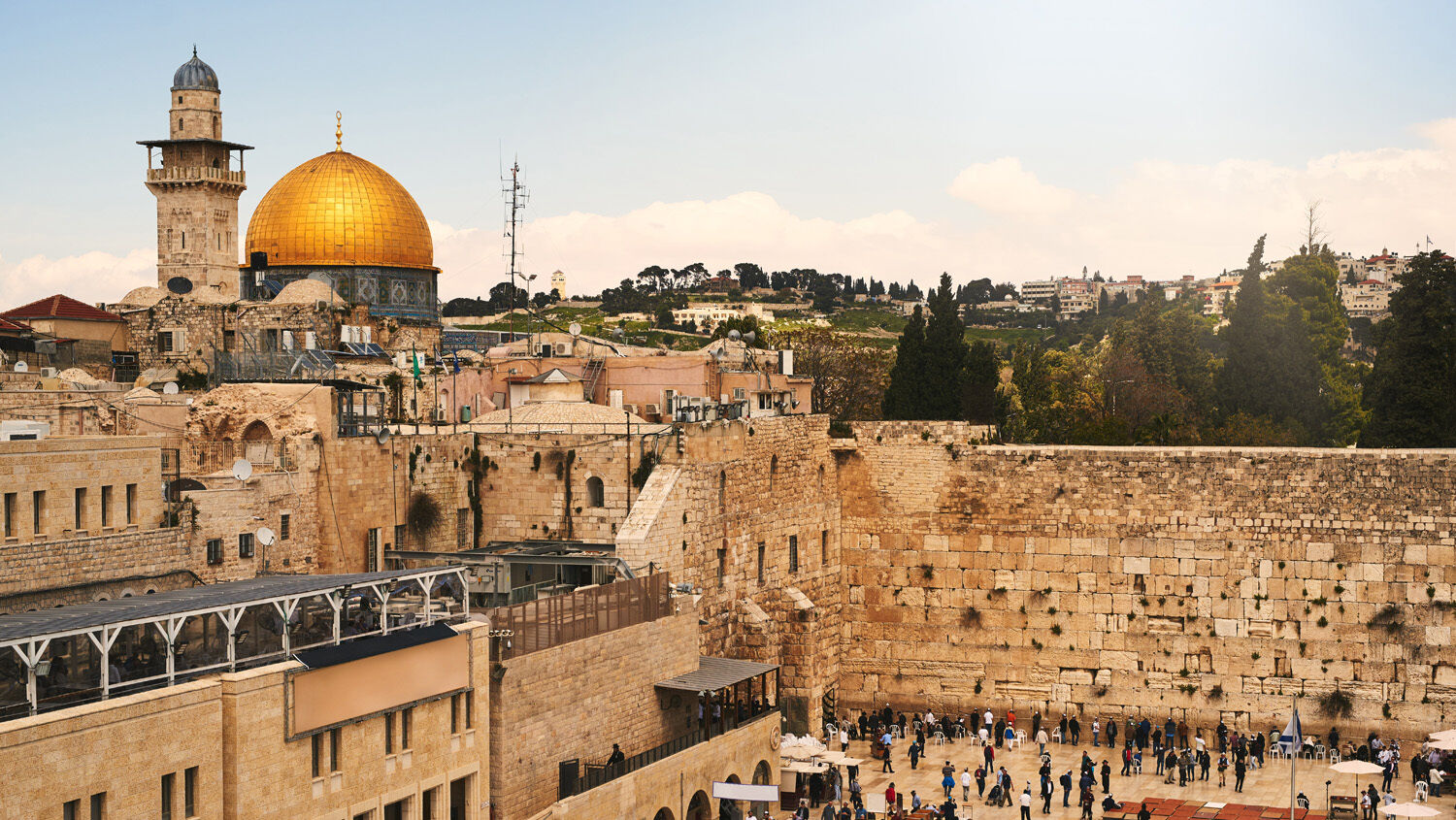 The answer may surprise you.

What event does each of these three headlines from last week refer to? What could cause such turmoil? A third intifada? War between Israel and Gaza? Rocket attacks from Lebanon?

The correct answer: One Jew visited Judaism’s holiest site for about 13 minutes. Itamar Ben Gvir, Israel’s new national security minister, visited the Temple Mount on January 3, a few days after the government was inaugurated. This was the first visit from a high-level Israeli government official in years.

The Temple Mount—or Haram al-Sharif to Muslims—is Jerusalem’s most prized and volatile real estate. Jews view it as the site of the first and second temples, the holiest point on Earth. Muslims view it as the site where Mohammed journeyed to heaven, the most important holy site outside of Saudi Arabia.

Before 1966 the Temple Mount was controlled by Jordan. When Israel took control, it set up what is called the status-quo of Jerusalem holy sites. Jordan would continue to administer Muslim and Christian holy sites in East Jerusalem. Jews would control the Western Wall. Non-Muslims could ascend the Temple Mount itself but are forbidden to pray there. And Israel would control security on the compound.

Despite threats of violence, Ben Gvir’s visit was without incident. He didn’t pray, give any fiery speeches, or unfurl a Star of David banner over al-Aqsa Mosque. He just briefly visited the complex, as allowed under the status quo—and as he’s done many times before, prior to becoming a government minister. Israeli politicians have also visited the Temple Mount before. The last one to do so was Police Minister Gilad Erdan in 2017.

Yet Ben Gvir’s visit is causing the international community to go ballistic.

Palestinian Authority Prime Minister Mohammed Shtayyeh accused the Israeli government of wanting to turn al-Aqsa into a new Jewish temple. He called for Palestinians to “confront the raids into al-Aqsa Mosque.” Saudi Arabia stated: “The Foreign Ministry expresses the condemnation of the kingdom of Saudi Arabia of the provocative action by an Israeli official who stormed the al-Aqsa Mosque compound.”

Apparently, a 13-minute visit by someone allowed to be there counts as “storming” the place.

The U.A.E. strongly condemned today Israeli forces’ storming of al-Aqsa Mosque, which resulted in the injury of a number of civilians.

The Ministry of Foreign Affairs and International Cooperation … underscored the need for self-restraint and protection for worshipers. Moreover, it stressed the U.A.E.’s position that the Israeli authorities should respect the right of Palestinians to practice their religious rites and halt any practices that violate the sanctity of al-Aqsa Mosque. …

The U.A.E. stressed the need to support all regional and international efforts to advance the peace process in the Middle East. It also underscored the need to end illegal Israeli practices that threaten the two-state solution and the establishment of an independent Palestinian state on the 1967 borders with East Jerusalem as its capital.

The U.A.E. was so incensed it called an emergency session of the United Nations Security Council (unsc), which met January 5. Abu Dhabi did so on behalf of the Arab League (an intergovernmental organization which most Arab states belong to), Jordan and the Palestinian Authority. The U.A.E. currently sits on the Security Council. The Council meeting continued the next day but did not come to any binding decision.

Israeli Prime Minister Benjamin Netanyahu was supposed to visit the U.A.E. this week. But Abu Dhabi postponed the visit until next month.

Such vitriol coming from the United Arab Emirates is interesting. In 2020, the U.A.E. signed a normalization agreement with Israel, the first Arab state to do so in over two decades. Netanyahu was prime minister at the time, and Israel controlled the Temple Mount and made no indication it would let it go. There were no problems in 2020. Yet when an Israeli politician makes a brief, non-incidental visit—as allowed by the status quo—the U.A.E. has a meltdown.

This wasn’t the only one of Israel’s partners filled with consternation at Ben Gvir’s visit. So was Israel’s traditionally closest ally: the United States.

“We oppose any unilateral actions that undercut the historic status quo,” U.S. State Department Spokesman Ned Price told reporters on January 3. “They are unacceptable. The president has previously underscored the need to preserve that historic status quo at the Haram al-Sharif/Temple Mount, as has the secretary. … That is a message we will continue to enforce.”

“We know that the Netanyahu government calls for maintaining the status quo at the holy sites. We expect the government to continue in this,” U.S. Ambassador to the UN Robert Wood told the unsc. “We are concerned by any unilateral acts that exacerbate tensions or undermine the viability of a two-state solution.”

Haaretz reported: “U.S., Russia Criticize Israel at UN Security Council Over Temple Mount Visit by Ben Gvir.” Apparently that’s the only thing that can bring the United States and Russia together.

The U.S. claims Israel is its most important ally in the Middle East. Yet even though Ben Gvir’s visit clearly did not violate the status quo, the Biden administration joined the international bandwagon to harass Israel. Why?

It’s not like the Palestinians haven’t been violating the status quo. According to the status quo, flags and banners of any kind are not allowed to be flown on the Temple Mount. Palestinians fly their flags and banners all the time—including sometimes ones that glorify jihad and terrorism. Under the status quo, Jews had unrestricted access to the Temple Mount. Now, they can only visit Sunday through Thursday for 4½ hours each day. The Islamic Waqf, the Jordan-sponsored administration of the Islamic holy sites, has closed, one by one, the Temple Mount’s various gates to non-Muslims. Now, non-Muslims can only enter through the Mughrabi Gate at the Western Wall.

These “unilateral acts” are conveniently overlooked at international forums. Instead, the Jews are the ones claimed to attack the status quo. Again, why?

Because according to Ambassador Wood, Jews’ visits to the Temple Mount “undermine the viability of a two-state solution.” The U.A.E. statement was more direct. The Israeli minister of national security visiting the Temple Mount “threaten[s] the two-state solution and the establishment of an independent Palestinian state on the 1967 borders with East Jerusalem as its capital.”

The “two-state solution” means Israel giving the West Bank independence as a Palestinian state. How to bring peace between Israelis and Palestinians is a legitimate question. But according to the 1995 Oslo Accords, while Arabs in Jerusalem could participate in Palestinian elections, Jerusalem was not granted to the Palestinians. Jerusalem’s status was to be determined through future negotiations.

This, of course, never happened. But the international community—including the U.S.—doesn’t care much for Israeli negotiations or concerns. They’re trying to force Israel’s hand in giving up the Temple Mount.

This is why Ben Gvir’s visit has provoked such outrage. The Palestinians have been taking more and more control of the Temple Mount. The international community has let them because they want the Palestinians to have the area. Ben-Gvir’s visit is the Israeli government’s perfectly legal way of standing up to this intimidation. It’s Israel’s declaration that while the Arabs will have worship privileges, the Temple Mount is under Israeli control and Israel isn’t giving it up without a fight.

There are plenty of worse problems in international affairs for diplomats to fixate on. There’s the war in Ukraine, rising tensions between Serbia and Kosovo, escalating rhetoric between North and South Korea. Each one of these conflicts threatens to suck the whole world in. Yet one Jew visiting the Temple Mount for 13 minutes sends world leaders into a frenzy. And somehow, a liberal democracy has no right to its own capital city that it has controlled for most of its existence as a sovereign state.

“Criticism of Israel is not inherently anti-Semitic—but such obsession is,” theTrumpet.com assistant managing editor Richard Palmer wrote in the September 2019 Trumpet issue. “There is no evidence to suggest that Israel is the most problematic country on the planet, demanding the overwhelming attention of the United Nations. The Jewish state is being singled out because it is Jewish. That is textbook anti-Semitism.”

Think about other divided cities and regions causing political problems. Few in the international community think it a sin for North and South Nicosia in Cyprus to reunite—even though, like East and West Jerusalem, they are divided on ethnic lines. Few didn’t want East and West Berlin to unite during the Cold War. The calls for Northern Ireland to unite with the Republic of Ireland seem to grow louder each year. And nobody is asking Hanoi to give the former South Vietnam its independence again. Yet Jerusalem is somehow always different—and the proposed divisions almost always benefit the Arabs. The implication then is that the world doesn’t like the Jews.

Few things happen in international politics without reason. The world may have an irrational obsession against Israel and Jerusalem, but why? Why is this the one issue America, Russia, Europe, the Arab states and the rest of the world can unite on? If you asked the leaders of these countries, they probably wouldn’t be able to answer.

“To this day, this city is at the heart of the world’s thorniest political and diplomatic dilemma,” Trumpet editor in chief Gerald Flurry writes in The Eternal Has Chosen Jerusalem. “It is a hot spot for devastating news caused by religious and political resentments, terrorist attacks and other violence. It is a powder keg charged with nuclear potential! No other city is so fraught with international tension.”

Jerusalem is not just any other city. Jerusalem has a special history unlike any other city on Earth. It is the spiritual center of Judaism, Islam and Christianity. It is viewed by billions around the world as a city set apart by God. The Bible shows Jerusalem to have been God’s spiritual capital from before ancient Israel existed (Genesis 14:16-18) through the times of the kingdom of Israel and the New Testament age (1 Kings 8:1, 12-13; Matthew 5:35). Other prophecies show the city’s importance in God’s master plan (Revelation 3:12; 21:10). It is this spiritual reality that makes Jerusalem so contentious to the whole world.

The Bible says Jerusalem hasn’t seen its end of trouble (see Zechariah 12:2-3; 14:1-2), but that doesn’t mean its future is doomed. The same Bible shows that Jerusalem’s greatest days are yet ahead. Mr. Flurry writes:

Yet, oh how God loves Jerusalem! Mainly He loves the Jerusalem that is to come. Over the centuries, through His prophets and apostles, God has inspired a multitude of prophecies about this extraordinary city, many of which reveal His glorious, imagination-stretching plans for it.

If you would like to learn more of these “glorious, imagination-stretching plans,” request a free copy of The Eternal Has Chosen Jerusalem.