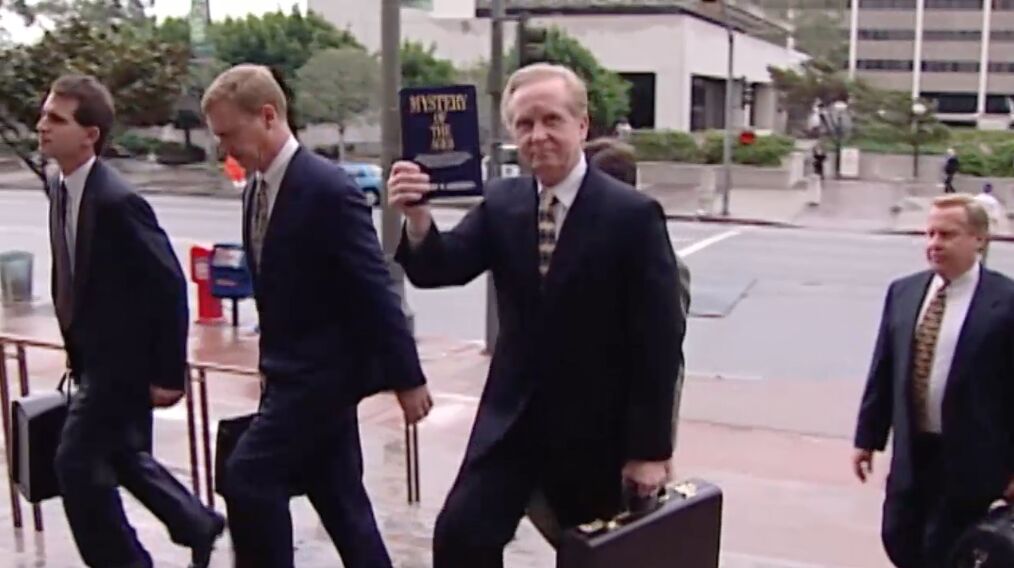 A timely lesson in an age of lies

How much do you value truth? Enough to take courage and make a stand? It’s a crucial question in an age where truth is so little valued and so under assault.

Thirty-three years ago today, the Trumpet’s editor in chief, Gerald Flurry, loved the truth, and he put everything on the line for it.

He was a minister of the Worldwide Church of God, a truly unique church full of solid biblical truth. That truth was championed by Herbert W. Armstrong, whom God used. But Mr. Armstrong had died nearly four years prior, and the Church had new leaders. While they promised to preserve this exceptional organization, they subtly, deceitfully began changing the very truths that defined it.

They were fundamentally transforming the Church of God. People who continued to believe what they had always believed were now attacked by their own leaders. Those leaders had claimed for years that they believed those truths. But now they had more “progressive” ideas—and they had the power.

Gerald Flurry clung to the truth. Thirty-three years ago today, he was fired for it.

That courageous act of devotion to the truth is what started the Philadelphia Church of God, the organization that publishes the Trumpet.

Now Americans are in a situation that feels ominously and inescapably familiar to members of the Church of God. An attack is underway. It is coming from people at the top who are targeting the very thing they claim to love. It is concentrated against core principles. It is designed to make you feel wrong, strange, outcast for believing the things you have always believed.

Do you have the courage to stand for truth? If only there were more Americans willing to take such a stand for truth today! There are astonishingly few!

We are in a time when truth is being cast to the ground, when powerful people are bullying and silencing others for speaking facts and truth. Many are upset, of course, but one way or another, most people are simply going along.

The Epoch Times captured some of this in discussing the “Twitter Files”—the internal Twitter documents that expose the collusion between Democrats, intelligence officials and leaders of an enormously popular and powerful social media platform to suppress information about the Hunter Biden laptop and help Joe Biden take the White House from Donald Trump.

The Hunter Biden laptop story, Jeffrey A. Tucker wrote, “only scratches the surface of the lies we’ve been fed for nearly three years, most having to do with covid, the great issue of the day.” He described all the propaganda pushed by public health agencies and mainstream media: that everyone, young and old, healthy and sick, were equally vulnerable; that masks would prevent viral spread (“I received a note from the actual inventor of the N95 mask who told me that it was a preposterous claim from the beginning, that no porous masks could stop a virus, any more than a chain-link fence can block sand particles. It doesn’t take high-end science to figure this out, so public health agencies were lying all along”); that vaccines would stop transmission and were perfectly safe (“even though not even the manufacturers made such claims”); and many more.

We are swimming in lies, all of them practically universally pushed by the major media—by Democrats—and even by so many Republicans! And these people worked together to silence and punish alternative views—regardless of the truth!

This really is stunningly similar to what happened within the Church of God after Herbert W. Armstrong died.

Gerald Flurry wrote a book titled Malachi’s Message to expose the truth about what was happening. When tens of thousands of Church members knew something was wrong but couldn’t understand what it was or why God was allowing it, he clearly set forth how and why Church leaders were casting truth to the ground.

This is the book that started the pcg. It was a call to action to hold fast the truth!

That book raises the flag and encourages us to always remember, always love the truth.

That book explains 2 Thessalonians 2:3, which prophesies of “a falling away” within God’s Church—an apostasy from the truth—when “that man of sin be revealed, the son of perdition.” This prophecy says Church leaders would be extremely deceitful and unrighteous (verse 10), but the people allowed them to do their destructive work because they had fallen from the truth.

What made the difference? Verse 10 explains: “because they received not the love of the truth ….” They had the truth, but did not love it! God allowed this tragedy to test whether His people loved the truth or not.

Mr. Flurry writes in Malachi’s Message: “The noble elect have fallen in love with God’s truth.”

How much do you love God’s truth? If you love it, you will learn it, study it, prove it, dig into it. You will know it and devote yourself to it.

The truth is not easy to find—or easy to love.

In Revelation 3, God condemns the people in this era of His one true Church for being spiritually lukewarm about the truth. Lukewarm isn’t good enough for God. If we get casual about God’s truth, our love will wax cold.

This played out in God’s Church, and it is happening in America today on a mass scale with the nation’s founding principles, including the tenets of the Constitution that protect our freedom.

“Therefore, brethren, stand fast, and hold the tradition [or instructions] which ye have been taught, whether by word, or our epistle” (verse 15). Hold fast means stand firm. Look no further than tonight’s headlines to see what happens when people don’t hold past instruction. Americans are forgetting their very own history, losing their principles, and becoming convinced of egregious lies. Unless we stand for truth, guard it and fight for it, truth will be twisted, trampled and violated.

“If we fail to cling to our past instructions, we can’t stand firm!” Mr. Flurry writes. “It is precious knowledge God has given us to withstand Satan’s attack.”

This is a crucial point: In America, Britain and the other nations of modern Israel, as it was in spiritual Israel, God’s Church, the attack is not coming just from men. As Mr. Flurry brings out in America Under Attack, there is an extremely powerful, intelligent, shrewd spirit being, Satan the devil, who is guiding these destructive activities. Compare what you are seeing on the news to Ephesians 2:2, 2 Corinthians 4:4 and Revelation 12:9. The devil excels at deceiving, confusing and intimidating, at pushing people to succumb to cowardice and fear.

Yet that is the only way he can succeed. God’s Church never would have gone off track if ministers had stood up to the radicals at the top. Many disagreed with the new leadership’s changes, deceits and bullying but failed to stand up. The apostasy would have been stopped if even a large fraction of the people stood up.

Would America be falling today if leaders or even everyday people stood up for truth?

The Prophet Malachi lamented, “Oh that there were one among you who would shut the gates!” (Malachi 1:10; New American Standard Bible). “God is pleading with His temple servants—the ministers—to take a stand!” Mr. Flurry writes in Malachi’s Message. “It’s a strong plea from God to stop what is happening!”

Many Americans are lamenting, Oh that there were just one leader who would stand and defend our country!

When Jesus saw moneychangers in God’s temple, He strode straight in, threw down tables, scattered money, and loosed animals to clean it up!

But American leaders—and followers—continue to think they can work together with these radicals, negotiate with them, appease them, reason with them.

Whether the evil is in the Church or in the nation, God says stand up to it, resist it, and get it out!

In Malachi’s Message, Mr. Flurry pleaded with the leaders of God’s spiritual temple, His true Church, “God’s people desperately need an example to follow. God has helped me with many miracles since I was disfellowshiped. He will do the same for you. All we have to do is trust Him. Please step out on faith! … We ministers must let Malachi move and stir us to a greater effort! God needs loyal ministers now as never before!” Sadly, those ministers did not step out.

A few years later, Mr. Flurry led a legal battle against the wcg for the rights to print and distribute the biblical truth contained in Mystery of the Ages and other books by Herbert W. Armstrong. Those ministers, hundreds of them, still failed to step out, to stand up, to fight.

Those of us who went through this history are astounded at how this same history is repeating itself on a national level. There are now millions of people recognizing that something insidious, deceitful and violent is happening to the principles, the truths, our nations had. They’ve never seen anything like it.

And from our experience with God and with Satan’s attacks, what can we share with our fellow modern Israelites and those of other nations? Be strong and of good courage—and stand for truth.

Without spiritual courage, Mr. Flurry writes in Malachi’s Message, “the other virtues are of little value! God’s people can’t cower in fear and still grow in God’s love.” He then quoted Proverbs 28:1, where God says “the righteous are bold as a lion.”

He then exhorts members of God’s true Church to get out God’s warning message. “The Church is commanded to warn this world. Mr. [Joseph] Tkach has said the world was in a Philadelphian stage when Mr. Armstrong was alive. Now, he said, the world is in a Laodicean stage. Therefore the Church can’t warn the world as Mr. Armstrong did, because people just won’t accept the message, he said.

“How would Paul respond to such a strategy? He was cursed, beaten, stoned and left for dead—and finally beheaded for preaching the same message Mr. Armstrong later preached! The message must be preached whether the people receive it or not. God says to warn them! Christ and all of God’s messengers were brutally treated for preaching the gospel to a people who wouldn’t accept God’s warning message. … Today [the Laodiceans] lack the understanding and courage to deliver God’s powerful message!”

It is human nature to want to avoid difficult work like repenting toward God, obeying God and doing His work. We have to fear God enough to conquer that tendency. “Paul said, ‘[W]oe is unto me, if I preach not the gospel!’ (1 Corinthians 9:16). He feared the ‘lion’!” Mr. Flurry writes. “If we don’t preach the truth that God reveals, we show a dangerous lack of godly fear—fearing men rather than God.”

If we fear God, then we’re not going to fear men. The fear of God gives us the spiritual courage we need.

On this anniversary of the pcg, remember this history—and remember this lesson. As you see this terrible situation playing out across America, realize how crucial it is to be courageous to stand for truth.

Read Malachi’s Message to see the message that started the pcg. Read Raising the Ruins to learn the story of how the pcg stood up to the lies that destroyed God’s Church.