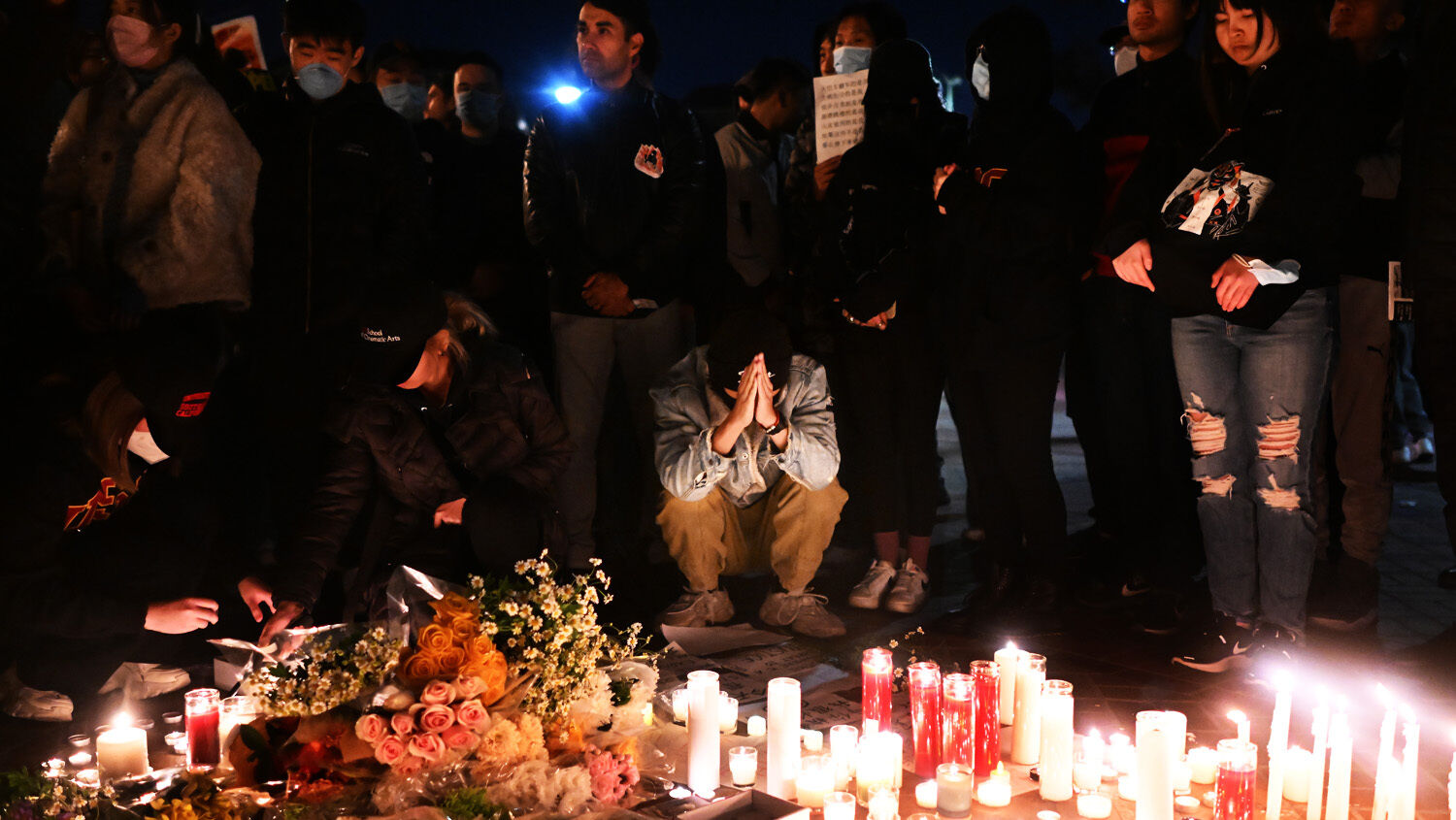 A man prays during a candlelight vigil for victims who suffer under China’s stringent lockdown in Urumqi.
Wally Skalij/Los Angeles Times via Getty Images

The Chinese Communist Party is currently facing the strongest protests against it since those that led to the Tiananmen Square massacre in 1989.

The anger is largely over the Chinese government’s covid-19 rules. Since the early days of the pandemic, General Secretary Xi Jinping has taken a remarkably strict stance against the virus. His policy, called Zero-covid, aims to isolate every single infected individual and keep them quarantined from the rest of the population—by force if necessary.

Most everyone in the country has the Zero-covid app on their phone, which gives them a QR code. That code is integrated with results from pcr tests that each person has to take every day or two, and with data about other people—potentially infected people—that have been in a person’s vicinity. The code tells you where a person can and can’t go. Every movement is meticulously monitored. If a person tries to board a train or enter a grocery store without a “green” QR, they are blocked and authorities may be notified and dispatched.

The Zero-covid app … has completely transformed 1.4 billion people into data that can be manipulated and shut down at any moment.
—Matthew Tye, China analyst

Zero-covid has resulted in three years of rigid lockdowns—often of tens of millions of people at a time. Some lockdowns have lasted as long as four months. It leaves many people without access to food and medicine, unable to generate income, and in deep despair.

It has driven some to a breaking point, evidenced by scattered protests that have broken out in various Chinese cities over the last several months. Until now these have remained mostly isolated and have been directed mainly against local authorities’ implementation of lockdown measures in specific districts.

But on November 23, a fire erupted in a residential high-rise in the city of Urumqi. At least 10 people were killed and several others injured in this tragedy. And horrendous footage of victims screaming as they burned circulated through Chinese social media.

The fire in Urumqi, Xinjiang, the last screams of the residents who were burned to death, other residents could only stand by the window to watch, because everyone was locked at home.#TheGreatTranslationMovement pic.twitter.com/Fr1gyrpPsa

Many Chinese understood that covid restrictions were the reason these victims couldn’t exit the building, and the reason firefighters weren’t able to help them. It is well known that Chinese authorities often lock covid-contaminated buildings from the outside, sometimes even welding doors shut. It is not yet clear if that was what prevented these Urumqi residents from escaping their burning high-rise. But in either case, covid barriers outside the building kept firefighters from driving close enough to douse the flames. Footage showed fire trucks aiming streams of water at the burning building, but from too far a distance to hit the flames. The jets fell short, raining down onto the street, while the people—including young children—died in agony.

Social media vids from Urumqi in Xinjiang say a fire killed ten people but fire trucks were blocked from entering the compound because of Covid zero lockdown controls. #China pic.twitter.com/wInWRCJOvs

“My mother’s name is Qemernisahan, 48 years old. My sister, Shehide, who is 13; brothers Imran, 11, and Abdurahman, 9; and youngest sister, Nehdiye, who is 5. If they had let my family out, they would still be alive”https://t.co/WlsYzuoixO

Tens of millions of Chinese saw this footage. Many recognized that the cause of the nightmare was Xi’s Zero-covid policy. Protests soon erupted in Shanghai, China’s largest city and a most important financial hub. They then spread into Beijing, Chengdu, Guangzhou, Hong Kong, Nanjing, Urumqi and other major cities.

Notably, many protesters went beyond just speaking out against lockdown measures and even began calling for the Communist Party—and even Xi Jinping himself—to be replaced. Many were chanting for a democratic government to be instated.

We’re already seeing the protests spread to non-related issues. University students are getting in on it. Opinions are being aired on dictatorship verses democracy, economic growth, housing, how good or how bad a job Xi personally is doing. In a country where any sort of common, coordinated public outcry is viewed as treason, we are already hip deep.

When Chinese citizens saw footage of the World Cup, with tens of thousands of people packed into stadiums, maskless and utterly unconcerned about any sort of social distancing, it only intensified their anger.

You won’t see this in our news. China revolts against the new lockdown and attacks the COVID police.pic.twitter.com/my7V59nX5Q

Amazing photos coming from the Communication University of China, Nanjing, where students are protesting, making their voices heard at a time of growing unrest in light of zero Covid, following the Urumqi fire. pic.twitter.com/uFp7ZeboQL

For our China Protest Tracker map, we tracked reports of 7 protests that took place across China on November 29th. Totalling 51 protests since November 25th, across 24 cities. See the third edition of our map. pic.twitter.com/KBJG59Dsst

At this movement in the chilly winter night, Shanghai people are chanting on the downtown street “ we don’t want dictatorship, we want democracy”.Extraordinary courage and solidarity showed. After 3 years of suffering from lockdown & control of society, people are raged. pic.twitter.com/AZRFh6bbiE

Got this from someone I know in Shanghai, who reports that protests there are MUCH bigger than even the media is saying, and it certainly appears that those getting off the subway are at least very intrigued with the idea of Emperor Xi’s removal. #revolutioninChina pic.twitter.com/uofn3c9Jmi

In #Zhengzhou, China, factory workers at the Foxconn iPhone plant protest over delayed pay & terrible working conditions. Both have resulted because of China’s strict Covid-19 lockdowns. Take a look as Chinese police flee from protesters:https://t.co/WbV7UgZjmq

Since cameras integrated with facial recognition software are ubiquitous in Chinese cities, and since the nation’s criminal justice system is notoriously brutal, many protesters likely knew they were risking their lives by publicly attacking the government. But they went ahead with the protests anyway because they are broken. They feel that life under the Communist Party’s ruthless dictatorship is not worth living. So they risked it all. And many of those who are being arrested may never be seen again.

Zero-covid has clearly been an economic disaster. It keeps people from working, shutters factories and shipping hubs, and disrupts supply chains. It has also been a disaster politically since it has turned many Chinese who were previously supportive of the Chinese Communist Party (ccp) against it—sometimes even violently.

Yet Xi Jinping and the ccp have long continued to keep the rigid policy in place. This is because Xi has tried since the pandemic’s early days to score political points both at home and abroad by contrasting China’s “covid success” with the failure of America and other Western nations. In his 2021 New Year’s address, he boasted that while millions were dying in the west, China had “put people and their lives first … with solidarity and resilience.”

He has reiterated this same message many times since. He also directs China’s state-run tv to repeatedly emphasize that the United States has suffered over a million covid deaths, making it the deadliest pandemic in U.S. history, and contrasts that with China’s claims of just 5,000 covid deaths. He has long pointed to these figures as proof of the efficacy of Zero-covid and of the legitimacy of his rule.

Zero-covid has become a signature Xi policy, so to reverse course now—after mercilessly inflicting it on his people for three years—would show chinks in his armor. But to maintain the inane and destructive policy would also weaken him. There are also legitimate concerns about the virus because Chinese cities are among the world’s most densely populated, the Chinese vaccine is virtually ineffective, lockdowns have prevented many from developing natural immunity, and China’s health-care system is roughly on par with that of Medieval Europe.

Xi has no good options. And whatever course is taken next, Zero-covid and the backlash against it are weakening Xi, the ccp, the Chinese economy and the nation’s global clout and power.

A crack in Xi’s personal authority isn’t simply a crack in the façade, but a fissure to the core which would unleash a torrent of dissent that would wash away … everything?

It seems that China has reached a turning point and will continue to weaken. This is significant because the Trumpet has been expecting a decline in the power of Xi and China relative to that of his fellow strongman in Russia.

Bible prophecy speaks of an end-time, multinational Asian military alliance called “the kings of the east” (Revelation 16:12). Ezekiel 38:2 describes the leadership of this Asian bloc, saying it will be headed by “the prince of Rosh, Meshech, and Tubal” (New King James Version). Meshech and Tubal are early names corresponding to modern Russian cities, and Rosh is a variation of an ancient name for Russia. This “prince” is clearly a Russian ruler.

The verse says “the land of Magog,” which includes modern China, will also be a major part of the Asian alliance. But the wording makes plain that it will not be a Chinese leader but a Russian one who is the main king, or prince, over this kings of the east bloc.

Trumpet editor in chief Gerald Flurry has identified Vladimir Putin as the man to fulfill this role. In his booklet The Prophesied ‘Prince of Russia,’ he writes:

We need to watch Vladimir Putin closely. He is the “prince of Rosh” whom God inspired Ezekiel to write about 2,500 years ago! …. When you study these scriptures alongside current events revealing modern Moscow’s imperialist direction, you see that Russian President Vladimir Putin is the prince of Rosh.

The path the protests take next and the way the Chinese Communist Party responds could determine how soon and to what degree the power of Xi Jinping, the ccp and China will be reduced.

In the meantime, the leadership in both China and Russia are causing a great deal of suffering in their nations and beyond. And they will continue to bring the world nearer to what Scripture calls “the times of the Gentiles.” This will be a time when dictators rule ruthlessly and the kind of suffering now taking place in China will be the norm worldwide. It is a dark future that approaches. But there is also great hope tied into current trends.

Mr. Flurry’s booklet concludes stressing that the fact Putin is now on the scene means the end of man’s failed efforts to rule himself is near.

A great transition is about to occur…. What we are seeing in Russia ultimately leads to the transition from man ruling man to God ruling man! And it is almost here! It is just a few short years away. … We have to realize that this is all good news ….

To understand the significance of the emerging kings of the east axis, the impending reduction of Chinese power relative to Russia’s, and the hope that is tied to these developments, order your free copy of The Prophesied ‘Prince of Russia.’